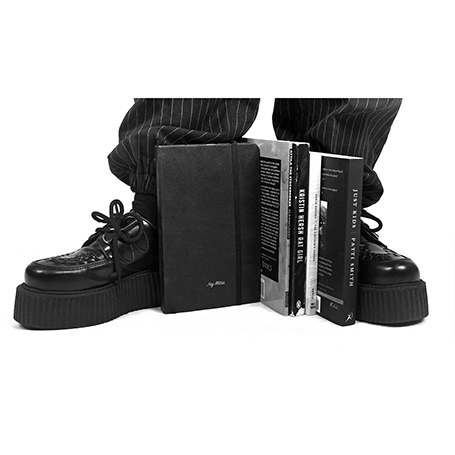 Jay Mitra is a punk poet, artist, and music journalist of multifarious influence in the Northern creative scene. Their work blends wit and compassion with punk and defiance, to produce whimsical and intimate performance poetry. Their writing is made immersive by their slam performances, conveying a fresh tone and attitude with each reading. We invited Jay to speak with us about music, poetry, and what punk means in the context of their life and work. 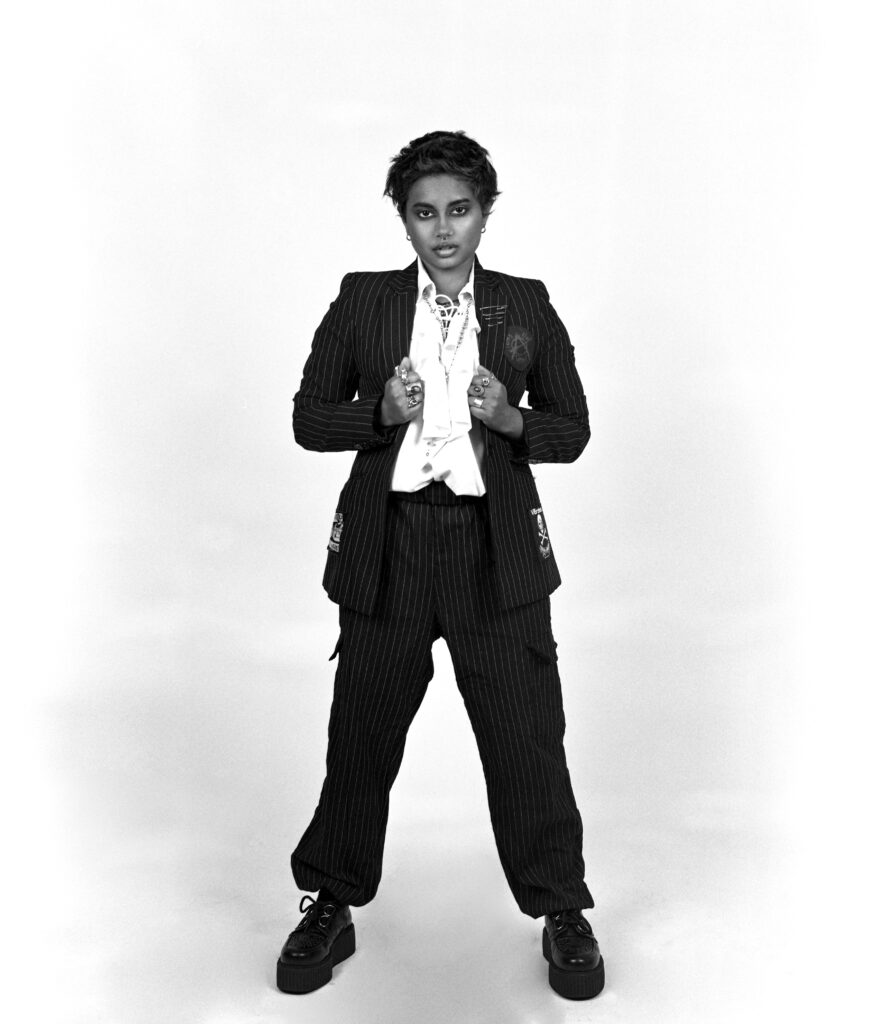 Can you tell us a bit about yourself?

I’m a trans-masc British-Indian punk poet, facilitator, and music journalist from Yorkshire, currently based in Manchester. I first started performing poetry at nineteen and have now been performing for over three years. I won the Oooh Beehive Online Slam championship in 2021 and, in the same year, won the Margate Bookie Making Waves poetry award. I’ve performed in a variety of festivals including BBC’s Contains Strong Language, Freedom Festival, Manchester Punk Festival, Secret Garden Party and Shambala Festival. All of which were incredible experiences – it’s always fantastic to see poetry and music work concurrently to enliven and challenge people. During lockdown, I had the incredible honour of supporting T.S. Elliot Prize winner Joelle Taylor at the Sad Poets Doorstep Club. Taylor has been hugely influential on my own creative practice, and as she once said: performance poetry and slams are ‘a community event, a bridge between ideas and audience. It was political at its core, allowing stories of poverty, racism, sexism, exclusion, and the language of the streets to flourish. To connect.’ I couldn’t agree more.

Your handle on Instagram is @punkofcolour – can you talk us through the meaning and how it resonates with you?

When I was about fifteen years old, POC (People of Colour) became a very popular term and I just thought that ‘Punk of Colour’ was an amusing spin on that. [Referring to punk,] I also wanted to take up space, as a person of colour, within a traditionally white-washed community and to make a statement that I am here too. 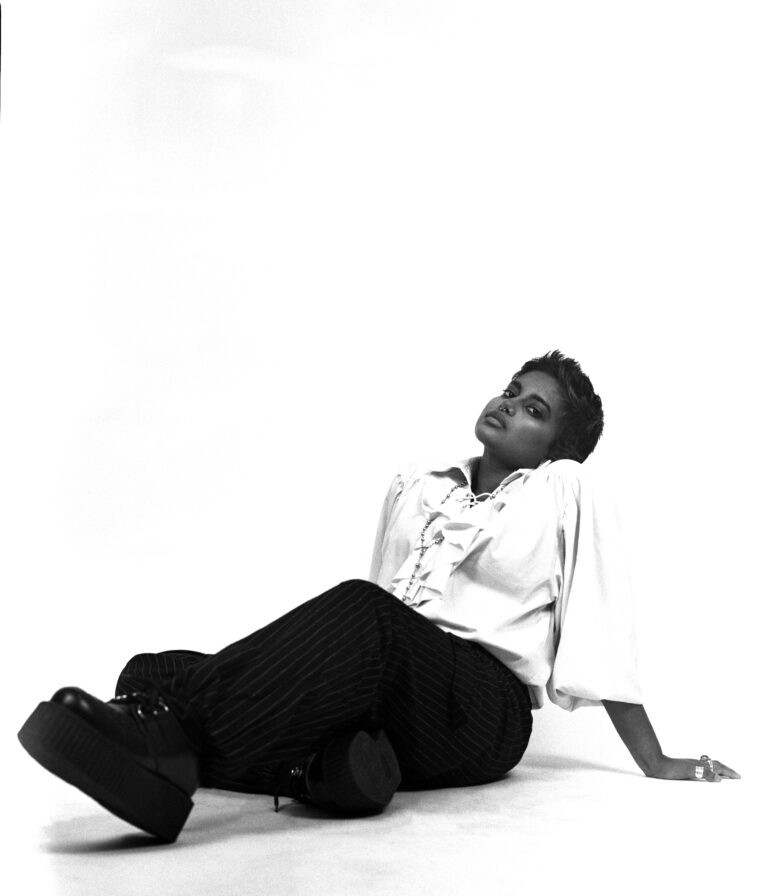 What kind of music do you engage with the most?

A bit of everything! Mostly punk – but I also particularly love shoegaze, soul, jazz and classical.

What is it about a musician/artist that encourages you to write about them?

Normally I tend to write about people who have inspired me personally –people who have overcome some sort of adversity or struggle, and proudly celebrate/encourage DIY spirit.

Which musicians’ work do you admire the most?

The Clash never gets old for me. I know I probably sounds like a fifty-year old White Dad when I say that, but they are probably my favourite band of all time. I’ve always been inspired by androgynous female artists too – like Joan Jett, Patti Smith and PJ Harvey. A lot of my musical taste is rooted in the quality of songwriting, punk/ska music introduced me to punk poetry. John Cooper Clarke, X-Ray Spex, Throwing Muses and even upcoming post-punk Leeds band Yard Act have massively shaped my own spoken word delivery.

The Adelphi club in Hull, it’s about the size of someone’s living room and is one of the oldest grassroots venues in the city. I used to go to gigs there all time when I was a teenager. It’s a very special place to me and I have lots of fond memories of the place.

What has been the highlight of your career so far?

Winning the Oooh Beehive Online Slam Championship and the Manchester heat of the Roundhouse slam. I actually performed the same poem during the Hull heat in 2019, so I’m proud of my progress and development to have won my heat in the Roundhouse Slam this time around.

With my music journalism, I would say interviewing Mickey Bradley from the Undertones. He’s very humble and charismatic and had me laughing for the majority of the interview (which is up on Soundsphere Magazine’s YouTube channel). It’s also amazing to hear his stories about punk in the 70s and 80s (the golden era of British punk in my opinion). 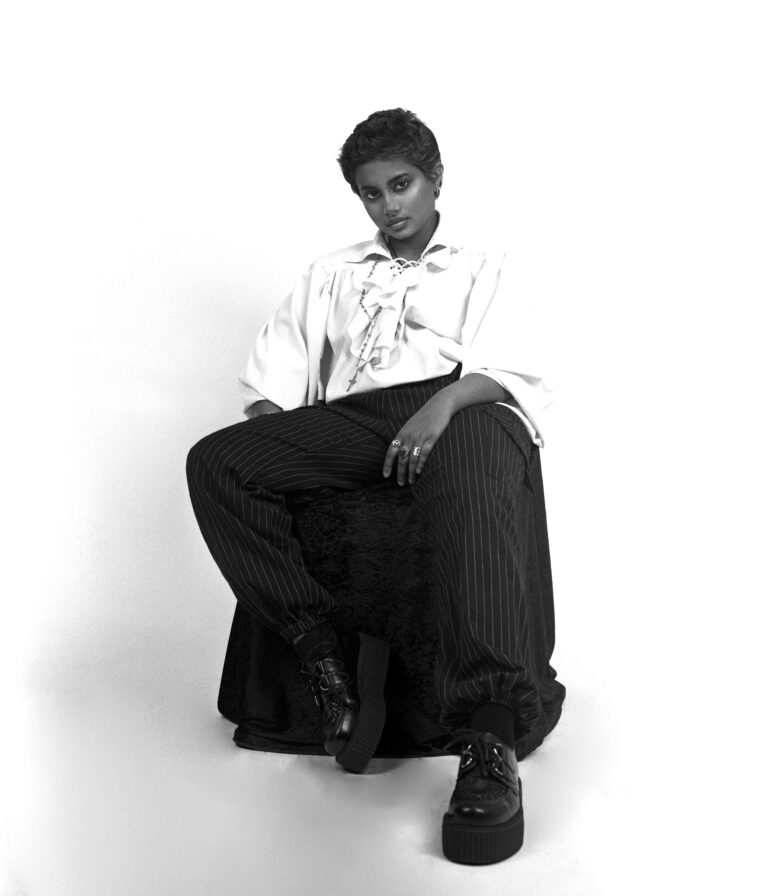 When did you begin writing, and what motivated you to start?

I began writing when I was fourteen, I think. The same thing motivated me as the majority of young poets – teenage angst! I grew up in a very strict household – not only were my family Christians, but also Indian, there were strong religious and cultural pressures at play when I was growing up and writing quickly became an outlet and release from that.

You write and perform poetry – can you discuss the themes of your poetry with us?

Initially it was stuff that made me angry. But recently I’ve been exploring more wholesome experiences – like the tender but beautiful moments shared in a relationship, and how being in love can be healing. My poem ‘Pirates’, which is about showering with your partner and celebrates non-sexual acts of intimacy, got shortlisted for the Creative Future Awards 2022 and is one of my favourite pieces to perform because of the ‘awww’ reaction from audiences when I say the final lines. It makes me happy to make others feel happy or nostalgic.

Is there a key message or mission of your poetry?

My poetry started off as inherently political and I believe it will always remain that way, but perhaps not as overtly as it used to be. When I first started, there was definitely a strong leftist agenda behind my performance pieces but since I’ve gotten older, I think I’m more concerned with creating works that make my audience feel something – as opposed to just preaching my radically left-wing views at them. If my audience don’t feel anything after hearing my poetry, I will have failed in my poetic mission.

Do you believe that writing and art need to be thought-provoking to be valuable?

No. In today’s capitalist society, hobbies have become so commodified – people have been made to feel that you have to be making money from something creative for it to be worthy of value. Art can be valuable even if you just create it for yourself. Even if it’s just mindless word vomit. Even if there is no ‘deep message’ or flowery language. Art can be a way to release your emotions – there’s value in that, even if it’s not ‘thought-provoking’. If a painter kept their work to themselves their whole life, but still felt like they gained something just from producing them, then there is value in that. The same goes for writing and all other art-forms. 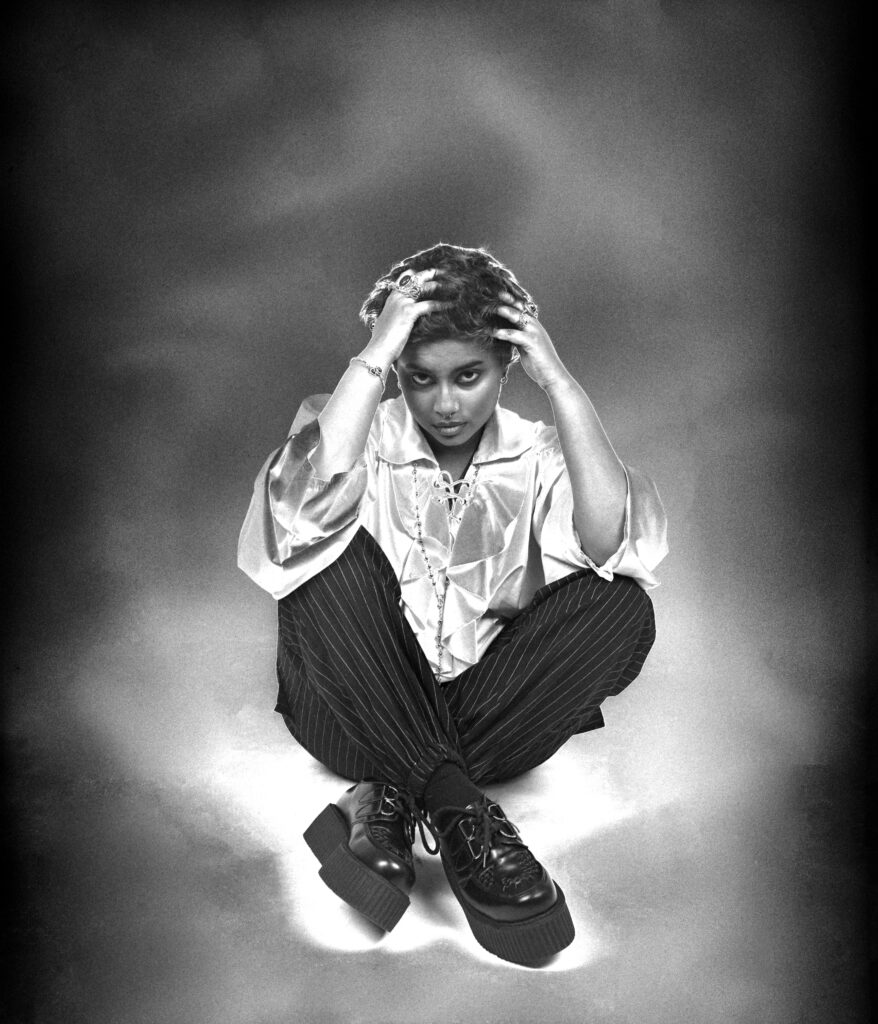 All photography by Ella Roberts.