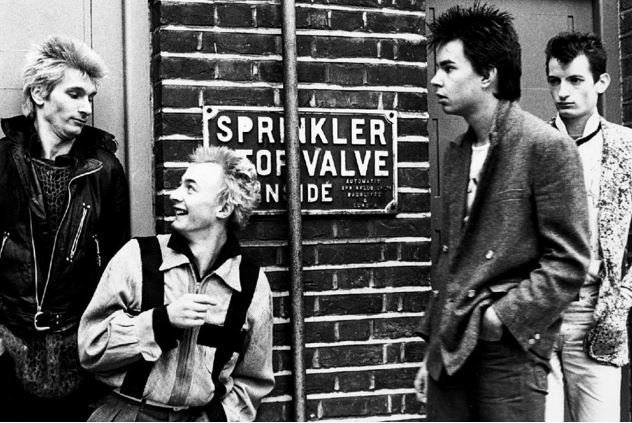 The sound of the future has nearly always existed in the past.

After 44 years Parisian band Metal Urbain still sound like a future crash landed into the middle of the seventies. Even then, in the fast forward rush of culture in the punk wars, their clattering drum machine driven, corrosive guitar take on the form was too radical, too original.

Trapped into cult status when they should have been huge, the band, formed in 1975, created their own future-vision that left them as the missing link between the Sex Pistols and Suicide. A highly influential cult revered by future plotters of groundbreaking music like Steve Albini, Henry Rollins, The Sisters of Mercy or anyone who was digging deeper into the black hole of punk rock for the true source.

The French band were radicals, free radicals, operating beyond the tightly wound music scene of the time. A scene that was too busy celebrating London or New York and not aware that there was intense action in cities like Paris. All this despite the French having a head start in the punk rock marathon in the brief flicker of time when punk rock nearly flared in France before the UK.

There were many brief flickers of the soon come changes en Francais – the 1976 and 1977 Mont De Marsan festival was held in a bullring in the deep south of France. It was a pioneering attempt to grasp at the coming energy in front of a small audience seeking a future rock n roll including a very young pre Joy Division Ian Curtis who somehow made his way there.

The French had loved the darker styles since their embrace of Vince Taylor and Gene Vincent in the fifties and their invention of left bank beatnik style. By the mid-seventies this had been transferred to a love of the ray ban cool of the  Velvet Underground, the deep understating of Iggy as both a primal forces and a deeply intellectual figure and Paris being the city where Jim Morrison checked out whilst trying to tap into the deeper French thing. The 1968 riots and French situationism had been the grounding for Malcolm McLaren to build his exotic punk theories on and he was fascinated with the place. The early Sex Pistols releases were somehow released by the French label Barclay Records. There were French proto punk bands like Stinky Toys and Little Bob Story and somewhere to the edge of this the coalescing Metal Urbaine.

Coming together in 1975, Metal Urbaine were the missing link between the soon to come rush to the barricades punk rock of the Pistols and the Clash and the hypnotic noise of Lou Reed’s Metal Machine Music – an album they took part of their name from. They were also fascinated by sleazy rock n roll and yet also the explorations into the new sonic post R’n’R terrain of Brian Eno. The former Roxy Music keyboard player was creating brilliant and captivating post rock that would open doors to whole new sonic terrains that would affect the seventies musical discourse. The Parisian droogs were seeking to meld these future noises with the hoodlum rush of underground and create their own dystopian world that would keep the electric rush of rock n roll but with new sounds instead of the same old same old.

In 1975 pop culture was looking for a future before the mantra itself became ‘no future’. In Paris the trio of proto punk noiseniks – Éric Débris, Rikky Darling, and Zip Zinc who put together Metal Urbain, were looking for something beyond the rapidly narrowing options for guitar, bass and drums. A future noise.

In the debris of mid-seventies culture, they could hear hints of another future. Tangerine Dream’s visceral synth noise was captivating, but it needed a pulse. It needed a beat. It needed a dirty disco. It needed energy. Blue Oyster Cult may have looked like heavy droogs, but their music was just too lacking in the fizzing future energy that the trio demanded,

It was Eno who gave them the creative inspiration to make the move.

You didn’t need the guitars. You could make the noise with synths if you could find them. One of the great lessons to be learned from punk was that ideas were the currency of the culture. This was not about guitar solos but vision. The new synths were a gateway to this, and Zip Zinc built them from kits before Eric Debris cashed in an insurance cheque to buy The VCS 3 synth that Eno favoured which they then doctored to add a tougher edge. Somehow, they crammed this new tech into the buzzsaw ideas thrown up by the primitive rush of the just released Ramones debut album to create their own version of punk rock. Initially naming themselves DeSade for a month they renamed themselves Metal Urbain.

Now they were ready.

Hardly any rock band used a drum machine in the mid-seventies. It may have been a primitive technology then, but its simple circuitry and spectral pulses somehow added to its clattering hypnotic pulse. The feathery swishing rhythms of the first wave of drum machines sounded like a brave new world and the DIY clattering and wheezing was instantly attractive.

Allied to this was their gloriously filthy, corrosive, ecstatic, electric guitar rush and the kind of claustrophobic desperados’ vocals that so perfectly caught the strum and drang of the times.

Initially feeling out of sorts they found a 1976 kinship with a new underground scene in the UK that was starting to make sense of this new mid-seventies’ energy. Debris and Panik were making regular trips across the English Chanel to London and picking up the UK rock press where they read about the coming punk scene which resonated with them.

They were now not alone.

That November 1976 Panik became the singer and after a further line up shuffle they released May 1977’s excellent debut 45, “Panik” b/w “Lady Coca Cola” – a stunning statement that sounds as fresh today as when it was released.

Dressed in a DIY appropriation of the punk rock Dickensian waif look of Malcolm and Vivienne’s Sex shop, the band should have been shoe ins for punk rock royalty but we’re too caustic and too groundbreaking for even that world.  Their next single, the defining ‘Paris Maquis’ was the first release on the newly set up Rough Trade label and John Peel embraced them, but cult status was always going to be their only reward. There was a smattering of further releases and reformations, but their groundbreaking genius was always frustratingly just beyond the bigger audience they deserved.

The band remain acknowledged by the true connoisseurs of punk rock – from their distinctive red and black art work, subversive lyrics, their rag doll punk rock appearance, those distinctive and compelling clutch of releases all marking them out as a perfectly realised and highly original band whose influence on those that know has been deep and profound.

Narrative by John Robb from louderthanwar and Membranes