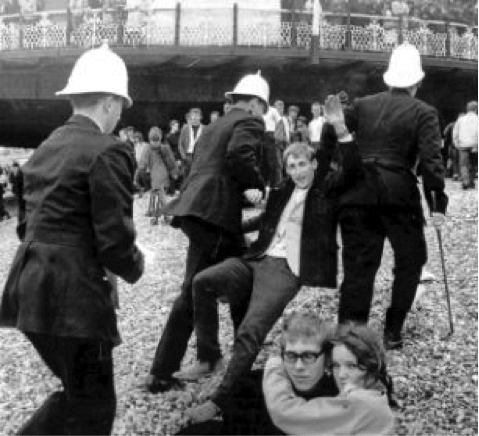 Somewhere on a beach in Southern England

On the east end of the beach –THE ROCKERS. Rockers were one of the original UK subcultures. A love of motorbikes, think Triumph, Norton and BSA, leather jackets (ex-military or genuine rider’s jackets), rock and roll music, biker boots and brothel creepers and hanging out in transport cafes.

On the west end of the beach MODS. Mods were all about fashion. A clean look, suits, sharp shoes, Italian Scooters and taking in some soul music and early ska.

In the middle of the beach- middle England on a sunny day out and caught up in a mad mash up between the two rivals, the Mods choice of weapon -razor blades sewn onto their jacket collars and lapels. The bikers wielded chains and knives. Both groups wielded deck chairs and any other furniture from the beach front.

The brawls happened in Southern England, in seaside towns like Margate and Brighton. It happened during the bank holidays when overworked Londoners were heading down to the coast expecting a bit of a breather. They couldn’t have been more wrong. Since during the 18<sup>th</sup> and 19<sup>th</sup> of May, the two enemy gangs found themselves at the same bank holiday destination. It was only a matter of time before the groups started ripping into each other, commencing in a full out brawl. In a BBC news article written at the time of the fights, they said that 1,000 teenagers “threw deckchairs around, broke them up to make bonfires, shouted obscenities at each other and at passers-by… and terrified elderly residents”. The fighting mob got so bad in Brighton that it lasted up to two days and was even called the “Second Battle of Hastings”, due to the fights slowly moving towards Hastings. Police came on the scene trying to calm down the situation but without success and the attacks continued. BBC also reported that, “two youths were taken to hospital with knife wounds and 51 were arrested in Margate.” Eventually, the fighting ceased that weekend and police jailed many participants and fined a huge number of them. BBC reported some figures, saying that the chairman of Margate magistrates “jailed four young men and imposed fines totalling £1,900 on 36 people.”
No surprise that the media were on the story and caused some of the population to get into a frenzy, panicking for their safety. Many media outlets criticized the subcultures, labelling them as hooligans and blaming them for ruining Britain’s reputation. They believed that these gangs were promoting violence and rebellion against the law and saw the complete breakdown of society. Of course, the media began to associate the two groups with drugs, violence, and teen pregnancy, conveniently blaming all of society’s issues on them.

The public were furious at England’s new number one enemies and wanted them gone. In successive bank holidays the police were on the case, locking down the seaside resorts and even flying in reinforcements from the North of the country. These thugs just had to be stopped!

The groups’ conflict became so influential that sociologist Stanley Cohen wrote a book discussing the fights, and the ‘moral panic’ it caused England. (If you’re interested, there will be another post dedicated to discussing the book in more detail).