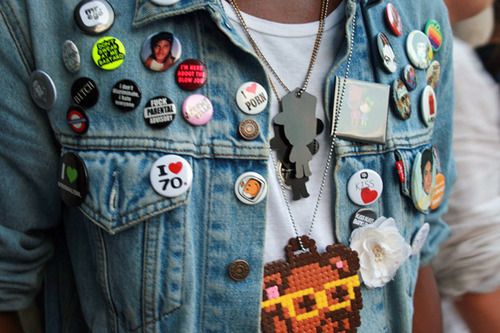 2015 was described by Vogue as the ‘the year of DIY fashion’, they would know. The undone hems and patched up jeans we oohed and aahed over on the catwalk have become part of our everyday wardrobes; now we’re just a few degrees centigrades away from cut off short-shorts and tie dye tops. One trend we’ve got our eyes on this year is the return of the pin, or button badge. Marc Jacobs’ ready to wear SS16 show featured Letterman Jackets sweetly embellished with a school girl smattering of badges and brooches. Following on beautifully from Dior Homme AW15 the year before, where badges with hand pressed flowers adorned suit blazers. Now, on the eve of their return, Underground are taking a look back at the importance and power of the humble pin badges.

If we’re going to do this properly we need to go way back when to 1897 when badges were made to celebrate Queen Victoria’s diamond jubilee. Cheap and cheerful, badges became increasingly popular across all walks of life. In 1907 Gandhi’s campaign for Indian independence designed and distributed ‘Mutiny Buttons’ in London, a tribute to the the Indian’s rebellion against British rule. Badges were also making waves across the pond. Campaign buttons in the US became a huge part of presidential elections, from Wendell Willkie in 1940 (you’ve never heard of him because he didn’t win..) to Obama badges in 2012. Even Donald Trump has his own badges -more’s the pity.

In case you were having any doubts about whether or not it’s cool to wear political badges, Game of Thrones star Maisie Williams has reassured us all. In April last year she appeared in Dazed and Confused Magazine smothered in political pins. In the past it was much more common for young people to express their political views and music taste through badges. Now, however, in the age of the internet, it’s much easier to like a group on Facebook, or tweet an opinion. Our virtual profiles have taken over fashion as our main platform for self expression.

Pre-internet, in the 60s and 70s badges really took off. Mods and Rockers and everyone in-between used them to decorate their clothing. Over 50 million smiley face badges, designed by two Brothers in Philadelphia, were sold in the year 1972. Students and hippies wore ‘Ban the Bomb’ and peace sign pins, massively influenced by John Lennon who was often sited wearing buttons with protest slogans and messages printed on them. Musicians were a big part of badge culture, they wore them and other people wore badges with them on. After The Beatles it was the Sex Pistols who sported the accessory under the spotlight, glittering with pin badges safety pins and other peoples spittle.

Badges went on to represent cultures and subcultures all through the 80s and 90s. New Wave into Britpop, both movements raising the bar, with Pulp producing their famous enamel locomotive badge for the Modern Life is Rubbish album. Since then, the trend has slipped out of sight and largely out of fashion. Though bands and protest groups still make and distribute badges the demand has been nothing like that of the 70s. We are definitely ready for their revival. Our own collection of Punk inspired pin badges are also ready. So come on and pin them on!