We now offer a Personal Shopper Service to help you make a purchase of our range of products.

Our Personal Shopper will be able to assist you with any questions you may have about Custom Made, Sizing, Product options, availability, shipping and payment methods.

This is a personal service for our customers, we welcome your enquiry….

Our Personal Shopper Service is available to talk to you Monday to Saturday.

Appointments at our London Studio are available on request for our customers. 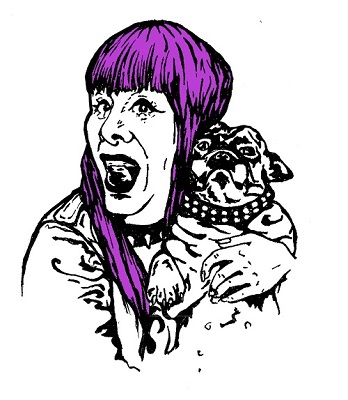 ALL ABOUT SUSAN: YOUR PERSONAL SHOPPER

I’m Susan and I’m your Personal Shopper here at Underground. I’m here to guide you through what is, after all, not just a fashion store – but a way of life. Ask me anything you like! If you know what you’re looking for I can guide you right to it. If you’re not so sure, I’m hot at matching people with the perfect products for their personal style and whatsmore I can advise on fitting, material options and custom-made products among a lot of other things…

As you can see from the profile below, I love with a passion British subculture’s fusion of music with fashion– so I’m always interested to hear what music you’re into, about gigs you’re going to, new bands to check out and so on…

Its a free service and I’m easy to work with, so give me a call for a chat, gossip, and great shopping.

Up Close and Personal (Shopping) with Susan…

Not so much a Personal Shopper – more of a kindred spirit-come-subculture vulture supreme… Susan doesn’t just epitomise everything Underground; she just is everything Underground. Not only does she know Underground products… she knows Underground people inside out and how to make your shopping fun. Not only is she likely to know the bands you’re into – there’s a good chance that if she doesn’t know them personally, she’s seen them live at some point in her wild and wonderful career… just check out this list!

You’re American, born and bred – from the ‘Windy City’ to the ‘Sunshine State’… seems a far cry from the world of Underground?

Yeah – well that was a long, long time ago. I grew up Chicago, Illinois – and I’m still proud of those roots – but my family upped sticks and moved to Florida just as I hit my teens. So, I mostly grew up in Miami – until at the age of 21 I could hear London calling me loud and clear from 4000 miles away! So, off I went, and I never looked back. And I picked the right time too – Punk was still very much alive and giving birth to New Wave, Post-Punk and Goth. For me it was like landing in subculture heaven.

And it seems you’ve been at the centre of UK counterculture ever since?

I really lucked out on arrival. I wandered into the Great Gear Market in the King’s Road and got talking to someone on a stall who told me to get over to Hyper Hyper in Kensington High Street because there was a job going… Subsequently I worked there, back at the Great Gear Market and on Kensington Market too – a triad of cutting-edge fashion of the time. And when I wasn’t working, I could usually be found hanging out at one of those places – or at Malcolm and Vivienne’s World’s End (Seditionaries’) and Boy on the King’s Road.

While Susan’s daytimes were all about fashion, the nights were all about Rock ’n’ Roll – in the broadest possible meaning of the phrase. The word-renowned London counterculture and nightlife, after all, were the whole point of the pilgrimage. Susan was a regular ‘Face’ at now-legendary clubs such as The Batcave, the weekly one-nighter run by Specimen (and, arguably, the birthplace of Goth), The Embassy Club and the Kit Kat Club. And she was in the very best of company…

At the Embassy I met Angie Bowie and Mick Ronson and had a drink with them (sadly that was the closest I ever got to David himself!). Loads of great bands hung out there including Madness, The Jesus And Mary Chain and Siouxsie and The Banshees among countless others.

It is kinda like that – but some stories are too good not to tell! One night at the Kit Kat Club I saw The Cure’s Robert Smith break his Rosary necklace all over the dancefloor. And I’ll never forget the sight of him on all fours scrabbling frantically for all the beads. I thought it was hilarious – and I couldn’t resist surreptitiously kicking them around some more! (Sorry Robert!).

Yes. I after a while I’d really put down roots in London. After seeing Guns N’ Roses at the Marquee Club my partner in crime Fiona and I started running a club night of our own: Loose Lips at Ritzi Park on the corner of Wardour Street and Oxford Street. The music policy was strictly rock – quite a radical move at the time – so some seriously crazy nights ensued, with patrons including the likes of Lemmy, Metallica, Izzy Stradlin from Guns N’ Roses, Nasty Suicide from Hanoi Rocks, Iron Maiden’s Bruce Dickinson and The Lords of the New Church. Looking back, I don’t think I quite grasped at the time just how awesome those nights were!

Unsurprisingly, Susan made some influential friends during those heady days…

My friend Lydia and I were good friends with Johnny Thunders from the New York Dolls – so when he played the Marquee in its Charing Cross Road incarnation we got to watch the show from backstage… Halfway through the show, Johnny spots us and literally stops in his tracks – actually stops playing and ambles over to say hello, leaving the band to carry on without him…

I’m going, ‘Johnny, get back out there and play FFS!’ but he’s oblivious… Just carries on chatting for what seems like ages… Then he bums a fag and, finally, strolls back onstage and picks up where he’d left off. An absolutely amazing night!

What with her own club nights, appearances as an occasional DJ variously at the Hippodrome on Wednesdays and the Astoria on Fridays and even as an extra in the Sid and Nancy movie, this former Floridian really had become ‘part of the furniture’ in London’s counterculture…

One night at the St Moritz in Wardour Street, Lemmy, who’d been a regular at Loose Lips, spotted me queuing at the bar.

‘Wanna drink, Susan?’ he roared out.

I was over the moon and accepted gratefully, asking for my usual tipple – Jack Daniel’s and Coke. Then I watched with mouth wide open as he asks for a pint glass, orders a BOTTLE of JD, fills up and pint glass, tops it with the tiniest splash of Coke and passes it over with a wink. If a job’s worth doing…

One time, the staff at The Spice Shop on Portobello Road, wanted to hear The Clash while they worked. So, as a diligent Manager, I dispatched a co-worker to Honest Jon’s record shop just down the road gets their greatest hits on CD. Jon delivered the CD in person and told me to turn over the plain paper bag… on the back in black marker it read:

‘Dear Susan, Glad you enjoyed The Clash. Me Too! Love Paul Simonon.”

Apparently, he happened to be hanging out in the shop and asked Jon who the Clash CD was for. Jon told him – and Paul replied, ‘yeah, I know Susan, grabbed the bag and signed it!’ I can’t tell you how super-happy I was to find that Paul still remembered me! (Well actually I can – you’ll have a job shutting me up about it!)

Next time I saw Paul, I unknowingly used him to blag my way into the St Moritz for free! Asked at the door if we were on the guest list, my friend and I decided to blag it and said, ‘We’re with the band!’, pointing at the two guys in front who were just disappearing down the stairs (the St.Moritz is like an underground labyrinth!). Amazingly, it worked, and we got in free – and those two guys turned out to be one of the bands playing that night and his friend Paul Simonon! Getting to hang out with (and get bought drinks all night by) him was such an honour! He even invited me to his private exhibition. Still with the Clash connections – another ‘claim to fame’ is that Mick Jones lives round the corner from me! As do Damon Albarn and Jarvis Cocker!

And just in case you are wondering, these are some of the bands I have seen, and still counting

Motorhead, The Kinks, The Who (with Keith Moon), Alien Sex Fiend, Specimen, The Damned, PIL, Madness, The Cure, Echo and The Bunnymen, Pulp, Suede, Naz Nomad And The Nightmares, The Cult, The Specials, The Ramones at The Clarendon Hotel, The Cramps……..

Our Personal Shopper will be able to recommend the most suitable UK Size for you with advice on fitting and size options.

With our extensive range of styles, our Personal shopper will be able to offer advice on material options, combinations, colour options, sole heights, fitting and suitability. Our Personal Shopper can discuss your requirements and what you are looking for and we can then guide you to the most suitable product.

Our Custom-Made service through all our shopping channels. Our Personal Shopper can discuss and help you make your selection and assist you with placing your order. Advice on colours, materials, sizes, soles, exchange policy and delivery options are all part of this free service.

We carry an extensive stock of product and our Personal Shopper will be able to discuss and advise you which styles and sizes are available from stock for immediate delivery.

We offer standard shipping terms which is typically 2-3 days for the UK and 3-7 days or more for outside of the UK. If you have a special requirement then we can take care of that on request (an additional fee may apply). We can also arrange a same day service within London, this is dependent on the time the order is received during the day.

Open
The Original Apollo Creeper- this version of the b

Open
The Hacienda: How Not to Run a Club⁠ ⁠ The acc

Open
Now this is really one of the best books recently

Open
From our accessories collection these oversize Saf

Open
Our sample sale will be ending soon. We have added