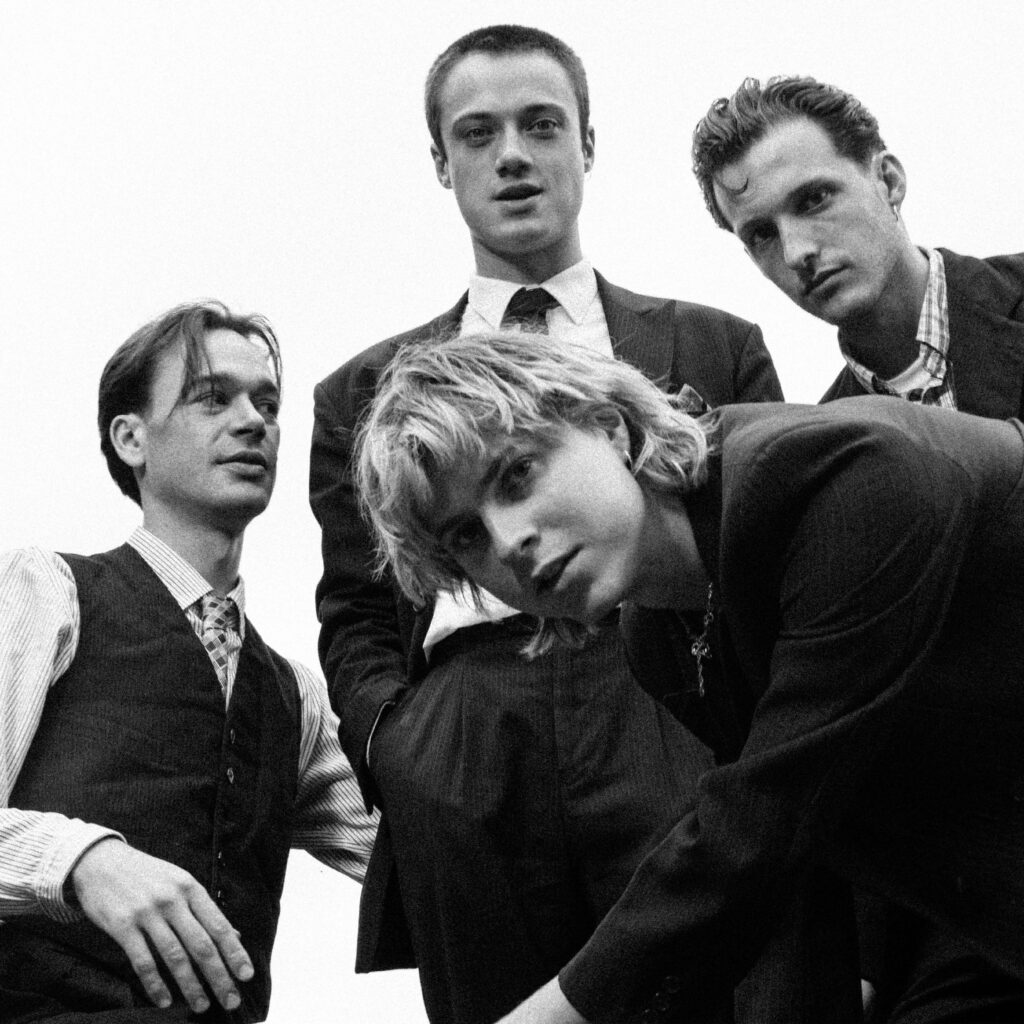 South London-based Legss are back with a new video for the title track off their second EP Doomswayers. Legss have established their unique edge with their ability to seamlessly blend dark post-punk and art-rock together with spoken-word. Filmed by Rory Edmonds and Mollie Gallagher, directed by Luke Kulukundis and Legss (who also edited the video themselves), the video is the second music video following September 2020’s ‘On Killing a Swan Blues’.

The second video from the post-punk quartet is just as unnerving and discordant: the key to Legss’ unique sound. According to frontman Ned Green, the track ‘Doomswayers’ is the ‘concluding statement’ of the EP which was released last October. He describes the video as a ‘sprawling, epic, emotionally-charged, scatty, nauseating, vitriolic visual accompaniment, set in a 17th Century, modern, time-warped LondWinium-by-Sea, to a three-part throwaway Violin Concerto in D Major, found in a tip and then transcribed into the six-minute title-track EP-closer that you can all love, listen, and now watch, today’.

The accompanying video opens with Green’s definition of his own invented term ‘doomswayer’: a cynical observer, or a person who lives a nothing life: the most important thing they do die. As in “oh, look, it’s that stale boy band Legss again. What a scatty lot of doomswayers.’ Naturally, the video features Legss’ satirical signature spoken-word style vocals presented by a stumbling lead character’s experience with the unsettling modernity of London. Chilling guitars and eerie, thumping bass, establish the clear tone for the band’s moody post-punk.

The video, with its distinct 3 parts in line with the song’s structure and lyrics, depicts a ragged protagonist, with strong themes of urban distress, discord and disturbance with the mundanity of the everyday running throughout. Legss’ sulky poetry and uneasy post-punk guitar licks combine to be quite spectacularly thought-provoking and unsettling. In the middle section, soothing melancholy chords feel like a brief sense of peace, before transitioning into a disturbing segment of minimalistic acerbic punk.

Legss are quickly building momentum since creating waves in London’s post-punk and art-rock scenes, becoming one of the UK’s most exciting new bands. They have already sold-out their tour supporting Hotel Lux in February 2020, had a place on Huw Stephen’s BBC Radio 1 2020 One’s to Watch show, and are consistently backed by BBC Radio 6’s Steve Lamacq.

Legss will be touring with Norway’s experimental post-punkers Pom Poko this September in London as well as their headline gig at Castle Hotel in Manchester.