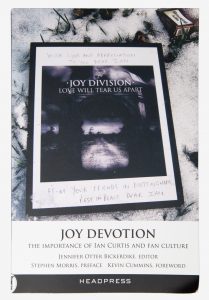 The notion of considering music fandom an act of secular worship is one relatively untouched by academics. Which is especially odd in this day and age- as the modern world seems governed, or at least constantly in orbit, of celebrities and music icons.

One scholar stands out- Jennifer Otter Bickerdike, who has taken on the pursuit of researching and analysing the relationship of the adored and the adorers from recent decades.

The self-confessed anglophile began life in Santa Cruz, California, and led an illustrious career navigating her way through Silicon Valley and the majority of the top recording companies- working with some of the era’s most successful bands. That is until epiphany struck- and she decided to pack it all in, pack it all up and pursue her life-long dream of achieving a PhD in the U.K. She decided to place Joy Division at the centre of her investigation, one of the most striking bands to explore in terms of theory, and a band that has remained a constant source of comfort, calm and motivation for Jennifer. A band that was so short-lived, but one that left such a permanent mark on the souls of fans- some even born after the band split- is rich with significant material to pull apart.

Her most recent book: Joy Devotion: The Importance of Ian Curtis and Fan Culture published in 2016 does exactly that. A collection of essays that range from warm, heart-felt narratives from fans; to concise, captivating analytical studies are carefully edited and collated by Jennifer.

Curiously captivating chapters of the book include investigative comparisons of the two starkly opposed biopics 24 Hour Party People and Closer, which amusingly concludes that the two Ian’s from either film would not necessarily get on with each other. Another segment, taken from Jennifer’s own PhD research, is certainly a striking moment in the book. Here she elaborates in Dark Tourism on the rite of passage that is attained by some fans when visiting the memorial stone of Ian Curtis. In it, she documents the lifespan of the grave by photographing it on the same day every month, noting the types of and degradation of trinkets that have been offered, in an altar-type worship.

This is furthered-upon by a study on the graves of Curtis and Sylvia Plath, whose grave is constantly under threat of vandalising, in a thoughtful piece by Dr Gail Crowther.

Added extras include a lightly provocative interview from legendary photographer Kevin Cummins as a Foreword and a note from Stephen Morris as a Preface. The book is a multi-faceted look into the life and hype of Joy Division, covering angles you would not immediately think to consider when looking at the four-year lifetime of the Mancunian band. Definitely worth the day spent reading the collection, opening your eyes to the cult of celebrity, worldly worship of creative genius, and the divine effect of the music greats. 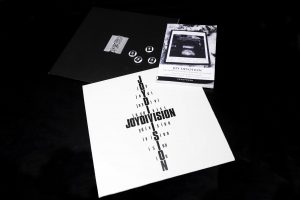 JOY DEVOTION IS AVAILABLE NOW ON OUR ONLINE STORE