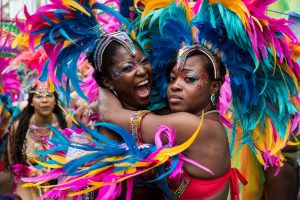 This coming August bank holiday is when Notting Hill attracts two million people to the second largest carnival in the World. Born out of the African-Caribbean community in the 1950s, Notting Hill Carnival is a significant event in British culture filled with colourful parades, music and Caribbean food staples.

Claudia Jones, also known as Mother Carnival, was inspired to start this event back in 1959 due to the racial tension of the 50s and the Notting Hill race riots. Jones was a determined and passionate woman who fought tirelessly for the human rights of oppressed people around the world, and she brought Caribbean carnival culture to Britain. In 1964 the carnival evolved and flooded out onto the streets- turning it into the carnival we know today.

What can you expect? This year there will be 38 sound systems and 60 bands; you definitely won’t be short of music! The main parade will take place on the Monday and covers a 2 mile circuit- think steel drums, African drummers and colourful Caribbean dancers. Food vendors will also be serving up classic West Indian food- Jerk chicken, curried goat and fried plantain to name a few!

There were suggestions to have the carnival moved this year but they were immediately shut down, North Kensington and Notting Hill is the carnival’s home and that is the way it will stay. The carnival will brighten gloom in the wake of the Grenfell Tower disaster, a minutes silence will also take place in memory of those who died.

The carnival runs from 9:30 am until 8:30 pm, plan ahead because the carnival is known for being incredibly busy and lacking in any phone signal.

More info can be found HERE.