The Underground Limited Edition Apollo single sole creeper in burgundy rub-off leather is a monk shoe, constructed on a walled, pointed-toe last and has a buckle fastening.

Distinguished by its 001 code number, Apollo was one of the very first Underground designs to be produced.
Built on a sharp toe last named Meteor, the Apollo is technically known as a monk shoe, a term used to describe the single buckle feature.
The other key features of the Apollo include its corrugated sole design, an interlace weave on the apron and in some cases the contrasting panels or underlays on the apron.
The popular all black leather or suede styles are representative of over 50 different variations including the ever popular black leather and leopard print version that was originally called Hacienda.
Apollo is available on a single, double and triple height sole.

This Style is Custom Made

This style is manufactured as a Special Order on our production line which takes 10-14 weeks. We will be unable to accept Cancellation or a Return for a Refund, but we do offer the option to exchange your order for a different size if the fitting is not suitable or exchange them for a different style. Please contact sales@underground-shop.co.uk if you have any question.

ADVICE FOR POINTED TOE CREEPER SHOE SIZES
All our footwear products are listed in UK sizes. Please visit our ‘Size Chart’ page for more information.
Generally the shoe sizes for the Pointed Toe Creeper collection are true to size.

AT HEEL  6.5cm  -this is the height of the shoe upper excluding sole

We offer free shipping to most destinations on all our footwear. Please visit our shipping page for more information.
SKU: RM-PL297 RUB OFF LEATHER BURGUNDY Category: Custom Made Footwear 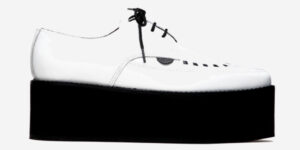 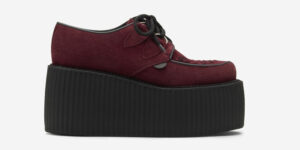 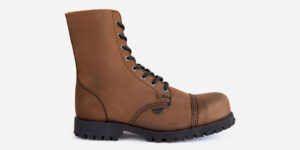