The Underground Apollo single sole creeper in black leather and purple suede is a monk interlace shoe, constructed on a walled, pointed-toe last and has a buckle fastening.

AT HEEL  6.5cm  -this is the height of the shoe upper excluding sole

The  Apollo Creeper was not only one of the first styles to be produced by Underground but its 001 code number tells you that is was the first style in our Originals Collection.

Generally the shoe sizes for the Pointed Toe Creeper collection are true to size.

The Wulfrun Creeper is available in UK sizes 2-12. If your size is out of stock and you would like to make a custom order (10 – 14 weeks production), please email us at customerservice@underground-england.com 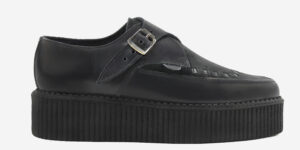 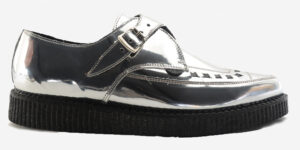