To celebrate the 40th anniversary of the legendary Motörhead track Ace of Spades we are proud to have collaborated with the band to produce this limited edition design. The Original Wulfrun Creeper has been embellished with unique details

· Embroidered Aces on the leather keepers that hold the D rings

· The ACE of SPADES logo discreetly embroidered on the heel

· An iconic illustration of Lemmy on the lining

If you size is not in stock, we are able to custom make these for you which ensures that our production is sustainable and sensible whilst also maintaining the exclusivity of the product with a delivery between 10 – 14 weeks.

Upon its release in 1980, the ‘Ace Of Spades’ album was nothing short of a gamechanger for all forms of hard rock. Like lightning in a bottle, it perfectly captured everything great about hard rock, heavy metal, and punk, amped it all up to 11, and came racing out of the gates at what felt like a million miles an hour, pushing at every musical boundary. Nothing was harder. Nothing was faster. And certainly nothing was louder.

The ‘Ace Of Spades’ album release was a magical moment in rock’n’roll history, an album which had enormous global impact and continues to resonate and inspire people worldwide. Fans to this day still remember where they were when they first heard it, and it immediately inspired bands worldwide to absorb the album’s energy, speed, and attitude into their own work. ‘Ace Of Spades’ is ground zero for thrash, speed metal, and punk / metal crossover.

ABOUT THE ORIGINAL WULFRUN CREEPER

The original Underground Creeper, Wulfrun was first produced in the 1980’s for our store in Manchester and was one of the styles to be included in our inaugural seasonal collection in 1987. One of the most popular designs it is, like so many of our original designs, named after an iconic British live music venue. Wulfrun is a round toe Creeper that has three distinctive features:

– an apron with three rows of interlacing

Wulfrun is gender neutral and produced in single, double, triple and wedge sole options and a huge selection of materials and colours including the signature black suede version.

The Original Wulfrun Creeper is available in UK sizes 2-12. If your size is out of stock and you would like to make a custom order (10 – 14 weeks production), please email us at customerservice@underground-england.com 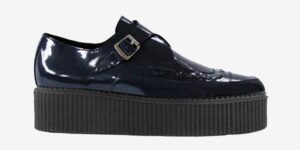 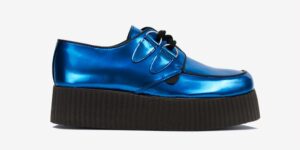 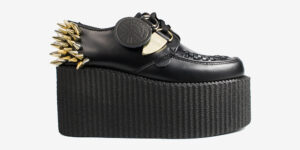