The Pin badge is long associated with political or social protest and dates back as far as the 18th century when it was used in Political campaigns. The modern version is most associated with the Peace Protest movement of the 1960’s and the punk era of the 1970’s. Cheap to produce and easy to print the pin badge became an easy way to show support for change (although many were also used to justify and support the status quo).

These badges reference our adherence to British Sub Culture, British Music and our support for live music using some familiar lyrics as well as touching on the obvious 1970’s punk references. 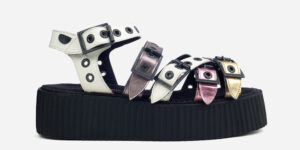