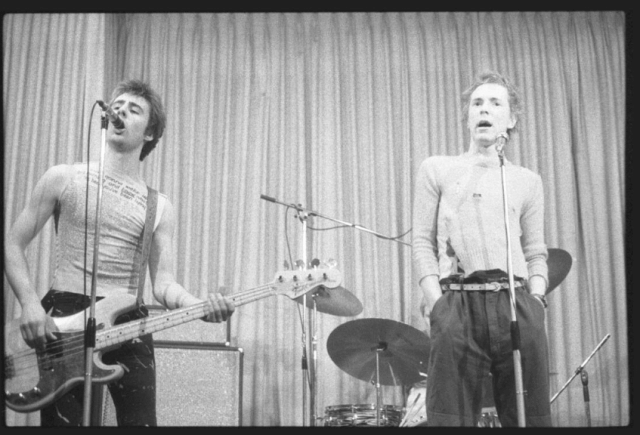 40 years ago, PTMADDEN shot his favourite group the Sex Pistols at Nashville Rooms in West Kensington, London in 3<sup>rd</sup> April 1976. The young art student’s concept was to take stage-framed photographs every thirty seconds to capture the whole performance of his favourite band- The Sex Pistols. The rest as they say, his history. Madden kept the negatives tucked away for 40 years, permitting only a few of the exposures to be seen recently. The exhibition showcases twenty six of Madden’s surviving photographs, out of two rolls of film, that have been meticulously compiled as a cohesive piece of artwork. The documented artwork makes its debut at the Wilkinson Gallery. The photographs reveal a rare, uncut, impromptu snapshot of the Sex Pistols ahead of their glory days, shot for PTMADDEN’s personal nostalgia rather than with the intention to sell them to a magazine or newspaper.

The twenty-six series of artwork Sex Pistols – April 1976 rallies against the convention and typical portrayal of contemporary rock photography and is more aligned with the likes of photography sets from ‘Ed Ruschca’s Twenty six Gasoline Stations in 1963’ and Bernd and Hilla Becher’s systematic series of works. Photographs that PTMADDEN considered uncontrived and “deliberately non-technical and purposely badly lit”.

PTMADDEN’s motivation to capture the photos came after witnessing the tension and fall out between Sex Pistols’ lead singer Johnny Rotten and his band members at the 100 club show on March 1976. Following this, he sought help on how to use his 35mm camera and took a timeless snap fearing the band would split after their tumultuous performance:

“I took photographs of the Sex Pistols at the Nashville Rooms on 3 April 1976 because Johnny Rotten had walked offstage the week before during a gig at the 100 Club after Glen Matlock refused to engage in an on- stage fight with him… If they split up at that gig, I would have my photographic time-travel machine”

Also documented in the exhibition are PTMADDEN’s photographs of car journeys exploring his view as a passenger across London and a selection of modified maps of these journeys.