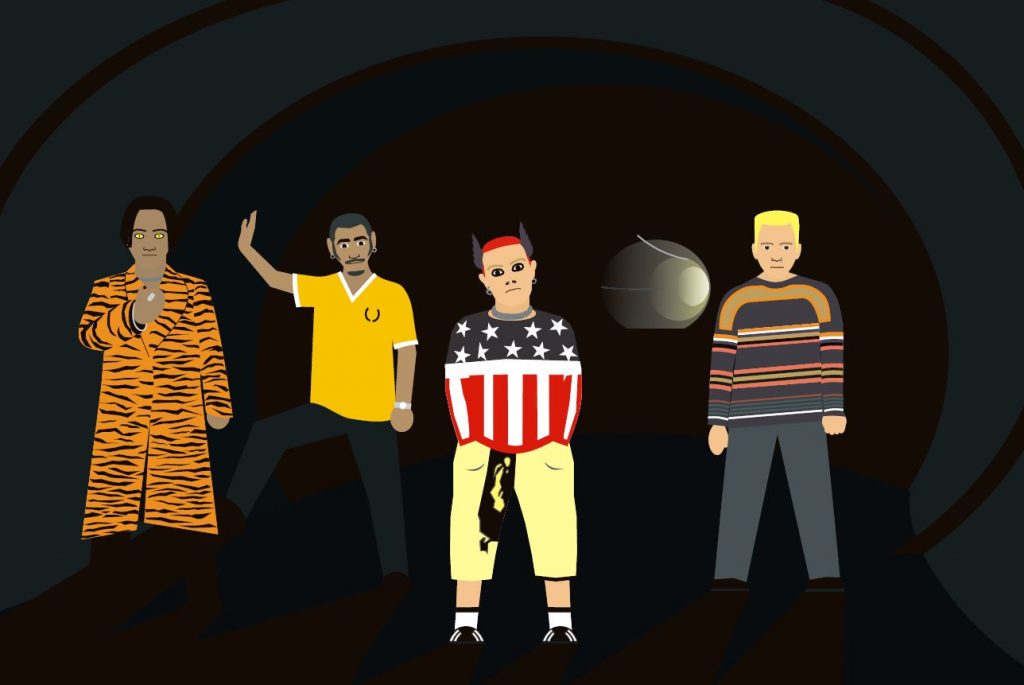 Coming from Blackpool, England, illustrator David Worth (known as Punk Rock Cartoons) has been making a name for himself in the realm of punk and indie. A quirky wit and a passion for alternative music certainly gives David’s cartoon artwork vibrant soul and personality. Featuring a clean to almost avant-garde layout, David’s stylish and functional designs capture the essence of his subject without fuss – making it easily recognisable.

Having started doing caricatures in April 2010, David’s first artwork of English punk band Public Image Ltd was acknowledged and liked by John Lydon himself. Aside from John Lydon – whom David is eternally grateful to – famed figures such as Glen Matlock and Clem Burke have also been very supportive of his artwork. Musician and Louder than War founder John Robb has been using the avatar that David drew for him as his profile pic on Facebook; while Steve Diggle of The Buzzcocks, Mike Joyce of The Smiths, The Dickies and Youth of Killing Joke have also shared the images on their pages.

Today, we are sitting down with the fun-loving David Worth to talk about his fondest moments of collaborating with musicians and designers, his latest project ‘Zip Zap Zoom’ with Spectral and Shaun Ryder that is heavily inspired by UFO and the city of Salford, as well as the most influential albums in his life (we asked him to name three but he ended up with five – undeniably, he surely is proud of his record collection!)

An interview with David Worth of Punk Rock Cartoons

You are a self-taught illustrator, what was the starting point and “the realisation” to create Punk Rock Cartoons for you?

Back in 2010 I was messing around with some drawing software on my PC and had an idea to create a cartoon of Public Image Limited. I hadn’t done any cartoons before and set about having a go to see what I could create. I did two and sent them to the band’s website. To my surprise they appeared on both the John Lydon and the PIL Official websites. I then created some more over the next few weeks, and they were also put on the sites. That was a great launchpad for my artwork and I am really grateful to John Lydon, John ‘Rambo’ Stevens and Scotty Murphy for publishing them and setting me off on my cartoon adventures.

What is the hardest thing in creating visual art when there is already a surplus of artists and cartoonists sharing their artwork on the Internet for free?

The hardest thing is getting it seen once it is out there. It can easily get lost amongst all the other art people publish. Instagram, Facebook and Twitter have all been really good for me for getting the art seen. But it’s fantastic when the subjects of my art share my images of them!

Let’s talk about your latest collaboration with Spectral and Shaun Ryder on the track ‘Zip Zap Zoom’. What inspired the quasi-post-apocalyptic imagery such as the eerie UFO?

John Robb put a call out for someone to create an animation for a project he was working on. A couple of friends from Blackpool put my name forward so I contacted John. He thought my style of cartoon would fit in with his idea.

John wanted Shaun to be wandering the streets of Salford, being followed by a UFO flown by Matthew and himself. I didn’t have much time to think about a storyline, so after a few listens to the track, I created images of some of the things mentioned in the song. It seemed to write itself as it went along. The UFO and the characters are brightly coloured against the grey of the Salford streets. To make one of the scenes more location specific, the bus being followed by the UFO is in the old Salford Corporation livery. I already had the Salford Lads Club from a Smiths cartoon I did a few years ago so I put that in as well.

I can immediately tell that’s John Robb from Spectral inside the UFO! How do you go about capturing the essence of someone’s facial features? Any advice?

I try to have as few facial features as possible. I don’t have outlines on the cartoons either, but this can be a problem when working against a light background. I do a lot of research on the outfits, musical instruments and stage sets for a cartoon. For instance, Lu Edmonds of PIL plays some unusual instruments, like the Saz and Cumbus, which took me a bit of research to find out what they look like close-up. It is just as easy to get it right as it is to get it wrong, so you might as well get it looking right. Sometimes I have finished a project after struggling to find a decent picture to work from, only to find a really detailed picture of the subject after I have published it.

What are some of the coolest projects you have worked on in collaboration with other artists, musicians or bands?

In December 2010, John Lydon published his book ‘Mr. Rotten’s Scrapbook’ and a cartoon of him from the Country Life Butter advert was given a full page to itself, annotated by John in his handwriting. This was the only cartoon in the book not drawn by John himself. It is still something I am really proud of.

In October 2015, Los Angeles based fashion designer Maggie Barry used my designs on her clothing in her LA Style Fashion Week Catwalk Show. She has designed for Lady GaGa, Katy Perry, Cher, Kesha and many more. In 2016, a large cartoon of The Damned and Johnny Moped was commissioned by Croydon Council to celebrate the 40th Anniversary of the release New Rose and to remember the Croydon Greyhound. There was a launch event at St George’s Walk, Croydon, where Captain Sensible and Johnny Moped attended and played some songs.

It was amazing to launch an exhibition of my cartoons in 2015 at EB’s Bar at the Farmer’s Market in Los Angeles there was an evening of Punk Rock Karaoke. The following night there was a special show by The International Swingers, arranged by Gary Twinn, who runs the bar and sings in the band. Clem Burke was playing drums and James Stevenson was on guitar. It was a packed night and amongst the audience was Bob Marley/Sex Pistols photographer Dennis Morris and it was great to have a chat with him.

If you were to draw a series of comics/graphics that is irrelevant to the music scene, what would that be about?

I would like to try my hand at graphics/animation relating to fashion or travel subjects. I have a few music animation projects on the go at the moment, but I am always keen to try something different.

1. Zounds – The Curse of Zounds. Anarchist punk band Zounds are my all-time favourite band and this album was the soundtrack to my teenage years. When I bought their Can’t Cheat Karma EP on Crass Records in 1980, I was hooked. They were so different to the rest of the second wave of punk bands, being very melodic and having some fantastic tunes. I remember being the only person in my year at school who really liked them as most people were into The Exploited, Discharge, etc.

2. Public Image Limited – Metal Box. It was either this or Never Mind the Bollocks Here’s the Sex Pistols. Even though I liked the Sex Pistols, I was too young to be really into them when they existed. PIL were around in my timeline so they were more my band than the Sex Pistols. PIL were on the radio and you could read about them in the music papers. This album has all sorts of styles and to me it sounds very ‘metallic’. This was probably due to the type of guitar Keith Levene used.

4. Kate Bush – The Hounds of Love. I bought the Hounds of Love album when it came out. Side Two, The Ninth Wave is fantastic. It is much better on vinyl as it is one side of the record. I have liked Kate Bush for years and was lucky enough to see her live on her Before the Dawn residency at the Eventim Apollo in 2014.

5. The Damned – The Black Album. This saw the Damned moving into new musical areas and had some brilliant tracks on it like ‘History of the World Part 1’ and ‘Curtain Call’. The original release of the album had a live side on it containing lots of their well-known songs, in a way showing how much they had come along as songwriters from their earlier days.