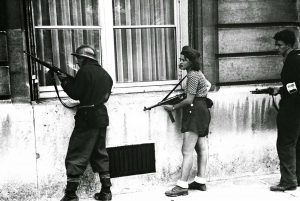 The citizens of France are unsurprisingly patriotic about their nationhood- they have proven, time and time again, that the power is held in the hands of its people.

Liberté, Egalité, Fraternité. From the overthrow of the French monarchy in the late 18th Century, to the upheaval of the Nazi occupation more than two centuries later- the French know how to start a revolution. Have you ever noticed the type of words we use in reference to resistance? Coup d’etat, saboteur- even guillotine-are just a few. Protests, marches and strikes are ingrained into the French culture even today, and perfected almost to an art form.

Studies of World War Two often avoid reflecting on the battleground itself- and the inhabitants that suffered. Yet perhaps in this case, suffered is the wrong term- as once again, the ordinary people of France stepped up to the defence of their brotherhood and nation.

Initially, many citizens of France were indifferent to the German occupation of their country, and were relatively unaffected by the Nazi’s influence and the collaborationist Vichy Regime. Before long however- the more severe, discriminatory and radical deployments that the Nazis were known for seeped into daily life for the French. The only sustainable retort for the country would involve fighting back- and soon enough, defiant guerrilla groups sprang up across Paris and beyond. Their undisputed leader Charles de Gaulle, and his next in line Jean Moulin, successfully encouraged and commanded the varying groups that made up La Résistance.

In most cases- these people were ordinary citizens, who employed ingeniously simple and paramilitary techniques to aid the Allies and rebel against the German occupiers. Known as resistants, partisans or marquis- resistance was realised through acts of sabotage- to the electric power grid, transportation methods and telecommunications networks.

The empowered woman that graces the above photo is Simone Segouin. Although only 11 percent of the Resistance was made up of women- their triumphs remain the most remarkable. At 17, changing her name to the nom de guerre, Nicole Minet- her formative assignments in the Francs-Tieurs et Partisans group compromised of stealing a bicycle from a German military administrator and using it to deliver messages between the resistants. Her guerrilla career progressed to more militant manner- when she went on to blow up bridges, storm and capture German officers and derailing trains.

‘One of the best days was when we arrested 25 German soldiers towards the end of the war. It felt good as we knew we would soon have our country back from occupation’ – Simone Segouin.