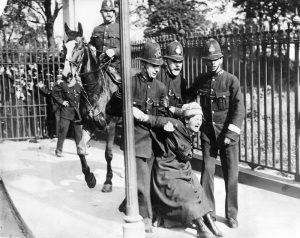 Deeds not Words. This was the motto of the 20th century suffragette movement that fought for women’s right to stand as candidates in parliament and to vote. It was agreed that women should not be able to exercise judgement in political affairs, something that their husbands could take care of. Following the unsuccessful nonviolent suffragists who laboured to secure the vote, the suffragettes decided to protest in the only language that men would listen to, war. Women at this time were at such a disadvantage they had to resort to violence.

Lead by Emily Pankhurst, the WSPU (women’s social and political union) staged marches and outdoor demonstrations, interrupted political meetings, chained themselves to railings outside parliament and battled with the police. One suffragette even vandalised the prime minister’s car. They carried out property destruction aimed at the existing power structure, designed for maximum publicity. The media branded them as unladylike, caricaturing them as bitter old spinsters who failed to reach the ultimate goal in life of marriage and motherhood. Nothing stopped them- their message was always clear and consistent.

In reaction to their protests the police arrested over one thousand suffragettes, to which they responded with hunger strikes. Even through rough treatment and habitual force-feeding, the suffragettes never backed down, and they would not stop until they had equal rights to vote. Their determination was awe-inspiring, ignoring what was expected of them and standing up for what was right. A true resistance. By 1909 they had published a magazine called ‘Votes For Women’ which sold 20,000 copies a week. Finally, almost a decade later, women finally were able to vote on the same terms as men.

What’s important here is that they never surrendered, they never gave up the fight. These women were true soldiers, and we owe them a great deal.

I’d rather be a rebel than a slave- Emmeline Pankhurst