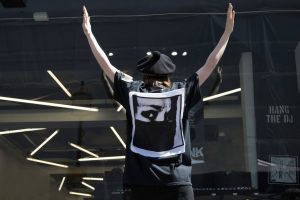 Ashamedly, Humanity’s history is perpetually littered with tales of tyrannical, maniacal narcissists scaling to power. Whether we are talking BC or AD; north or south; sovereignty, military or politically- the apparently perpetual trend of ego-obsessed, bloodthirsty and just plain reckless despots who snake to power is both embarrassing and horrifying.

Though, with every despicable act of autocratic oppression and violence- there glimmers the valour and altruism of a few individuals to precisely oppose them.

They are rare, they are relentless, they are resisting. And by resisting, they trigger riots, rebellion and revolution.

Falling short of physically amassing our bodies in protests or defence shields in turmoil- people are manifesting fear into anger, and anger in art. Art is weaponised and employed in transmuting the message of Resistance. In every corner of our planet, Resistance has been honed and woven into rich tapestries of culture. Whether it be music, painting, architecture, writing, marching, dancing, film or fashion- art is often the easiest language to digest and disseminate.

At Underground we champion subculture, and a mirroring embodiment of that is counter-culture. Like the Suffragettes to the Suffragists, what differentiates a counter to the sub is the fight to resist a subjugating power. Through methods of revealing and subverting the hypocrisies of the people in power, counter-cultures expose the ailments of humanity in an effort to heal them. Through this courage and love-soaked intention- some of history’s greatest art and triumphs have been attained.

Regrettably, history doesn’t always acknowledge their names or subsequent impact as intently as their oppressors. Rather than focusing on one movement- in this campaign we are championing the objective of many. From the Underground Railroad to the French Resistance, or the Suffrage movement to the fight for equal LGBTQ rights in today’s society- these are just a fraction of fearless people across the globe fighting for Resistance.

Our campaign will run from today to the middle of September, and will focus on these freedom fighters and the incredible work they do.

Follow us on our exploration over the next few weeks right here, on our blog.