Rise of the Eco-Punk: ‘A QUIET CEREMONY’ 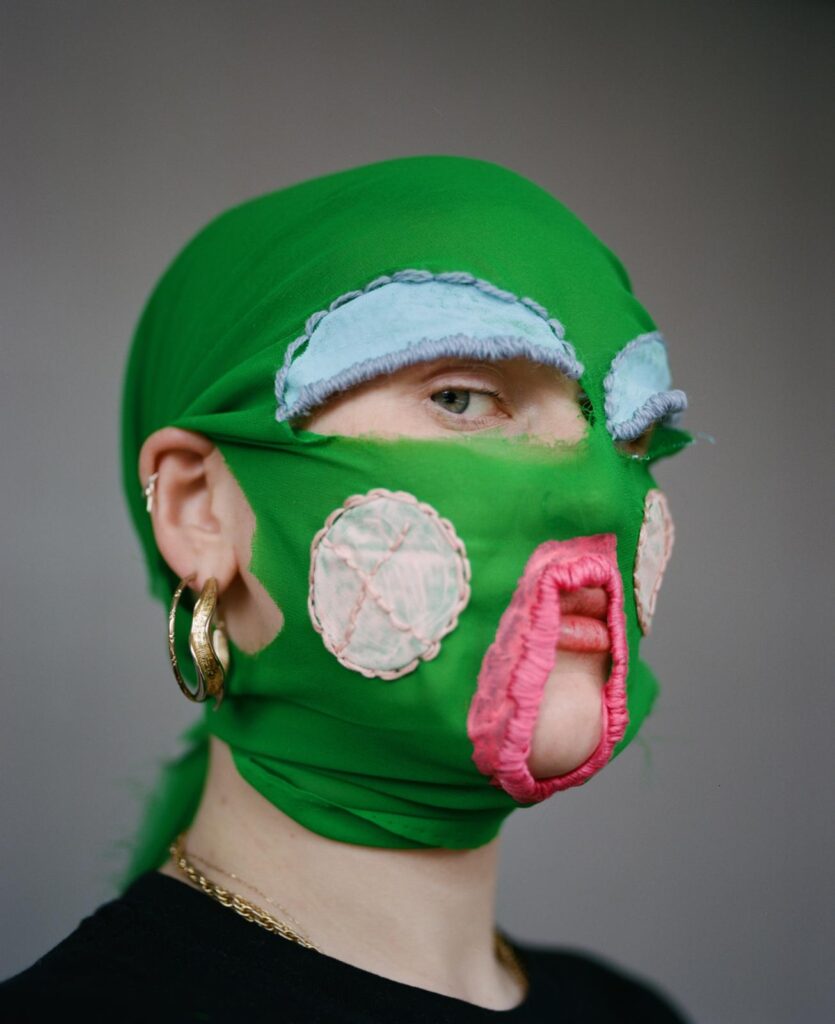 One year ago, recently graduated and newly redundant, Lucinda Graham set out to re-define what sustainable fashion could mean in the midst of a pandemic. Working from her parents’ dining room, equipped with discarded upholstery fabric and a grant (to buy an overlocker with), Lucinda assembled crochet, patch-worked garments; “rebirthing subculture through DIY aesthetics.” A business borne from resilience, Lucinda Graham has quickly become a vanguard not only for innovative, eco-friendly garments but a voice for the ways in which dress can effect inclusivity and mental health. On the first anniversary of her brand, and its new identity ‘A Quiet Ceremony’, we spoke to Lucinda on the complex histories of balaclavas, punk sensibilities and overcoming adversity.

You’re a self-proclaimed ‘Eco-Punk’, what does that term mean for you and your design practice?

I’ve never seen anyone else use the term. It came from years and years of having to be resourceful. The true essence of punk is looking around you and seeing what you can access readily and cheaply and how to make the most of that, as well as the aesthetics of ripped and shredded and raw hems and safety pins. I went to art college and struggled for money, I was very involved in nightlife but didn’t have the funds to buy new outfits for different events so I was constantly cutting up and re-making what I already had. I really do believe that the best and most sustainable option is to work with what you already have. It’s so easy to buy something from a big high-street retailer that fits the ‘punk’ aesthetic, but all the selling and mass-producing is exhausting and we don’t need it. So, I use punk resourcefulness as an alternative to fast fashion and over-consumption. 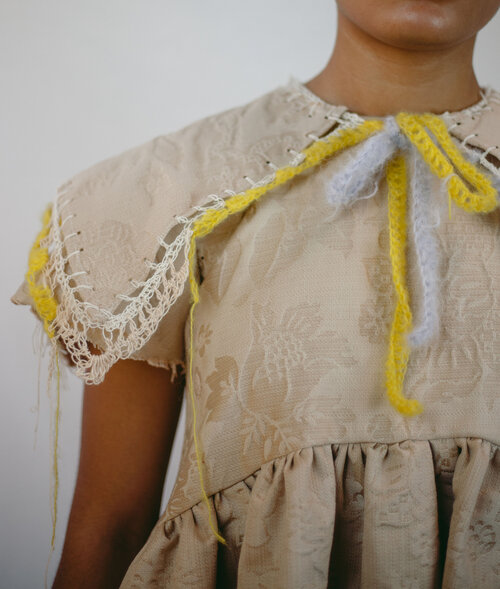 You’ve just launched an online sample-sale, could you tell us more about this collection of clothing?

My process as a maker is very odd but I wish more designers did it that way: I start fabric first. As I work mostly with waste, discarded or donated fabric, I get scraps that are in really strange shapes. My goal and challenge are to receive these unwanted fabrics and to re-imagine them.

This sample sale precedes the collection which we will drop in June. We wanted to make something that’s an alternative to sweats for coming out of lockdown. I’m sure over the last year that people’s bodies have changed so I think we need comfort-clothing. We made these Cuban-collared shirts and short sets which are adjustable for different body types, but still feel structured and cool.

The other side of the sample sale are pieces that can be for rental and shoots, it’s wonderful being able to keep some of these pieces. These are the weirder items of clothing which are a continuation from my graduate collection; using a lot of crochet and patch-working and agricultural twine!

Your website says that you’re “driven by a millennial’s hunger for reality in the digital age” which is a sentiment many can relate to. Your designs are so tangible with the assemblage of re-purposed materials, how do you go about seeking your fabrics? Has sourcing been a challenge over the past locked-down year?

It has been incredibly hard because of the pandemic but also not being London or England-centric. I live in a very rural place, almost all of the fabric stores in Belfast have now closed permanently because of the pandemic and even they wouldn’t necessarily have the sustainable pieces I’d be looking for. It was very hard, especially when I was finding my feet and starting the business.

I managed through word of mouth and rural grannies; lots of people donated scraps. Now I’ve gotten to a stage where I’ve built up a backdraft of fabric to choose from; an in-house collection but it is still hard. Most ethical and deadstock retailers are based in London so with Brexit and the pandemic, even fabric from just the UK can take 2 weeks to get here! 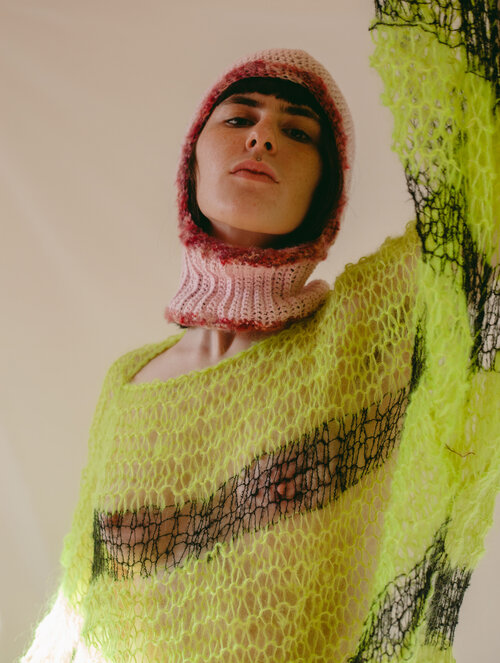 You’ve done a lot of styling and costume work for music videos. Does music prompt your making process?

Inadvertently, it definitely does, I listen to music constantly as a background noise as I work. i’ve got a very multi-dynamic listening sphere – it could go from Britney and Cher to The Cure and Dead Kennedy’s within an hour! A lot of influences have been from early British Punk. What I especially love about Punk and Riot Grrrl is that they are the few musical subcultures that aren’t overly sexualised or commodified or marketed: it’s incredibly anti-mainstream and anti-capitalism.

Conor Curley from Fontaines D.C. wore a custom suit you made to the Grammys, how did that come about?

He reached out on Instagram two weeks before The Grammys. The band had been assigned certain designer styling but Conor wasn’t feeling it, we had a really lovely chat about something that I feel really strongly about as a stylist, that the clothing shouldn’t mask the wearer. He wanted something that would reflect his style, he wears a lot of suits so it was quite a natural interaction when he liked a suit I’d made for myself which had trousers made from vintage curtains in a heavy 70’s damask. I get so excited when men want to push colour and shape and to experiment without changing who they are. I had some large panels and sample books from an interior design company, we used the sample book sizes for the cuffs and pockets; everything was used. It was such a jigsaw puzzle before cutting the pattern to ensure we had enough fabric. The whole suit was made entirely from waste and I am so glad that he trusted me with it.

You’re well-known for your balaclavas – what drew you to an item that is so loaded with often problematic histories?

As someone who’s personally struggled a lot with mental health, I was very aware of the huge mental health crisis in Northern Ireland, we have the highest levels of PTSD and suicide rates per capita in the UK. For a country that is steeped in a lot of division and trauma, you sometimes think it is progressing and then, seeing the news two weeks ago, you feel like you’ve fallen back 10 years ago. When I was entering my final year of Fashion School, I knew I wanted to do a performance piece, a short film, about men’s mental health. It started with meeting a taxi driver who told me about his trauma of The Troubles.

As much as it was a ‘fashion’ piece, I wanted to do investigative research into how men relate to their mental health. I was actually banned from doing my project because the university felt it was too risky. I’d planned to interview these men, with them wearing these balaclavas to hide their identities, but it was blocked by the university so I had 3 months and the balaclavas as a starting point. I ended up creating characters who were based on different pillars of Northern Irish society, and they all had their own camp and colourful face covering: creating a literal mask which touches on homophobia and intrinsic masculinity.

I’d only made 4, and a few samples, but I started getting commissioned to make balaclavas, especially for rappers; I think the performative element fits. They’ve been taken to this sphere of performance-wear, but they started as a commentary on what men go through over here

What do you have in store for the rest of the year?

We’ve just launched a re-brand, because I do so many different things as Lucinda G, it’s hard to compile succinctly what I do. The name is “A Quiet Ceremony” and all of the work and making will now go through there. It came at such a good time; it was a conscious decision. When you get a following, people think they have immediate access to you at all times, I wanted to divide myself from my work in that regard.

I’m also working with New Talent Fashion to develop the seminar series I’ve been doing which is all about getting a foot in the fashion industry, so regardless of where you are, you’ll have resources and insight. We’re going to be doing a really fun mini-collection which will be evening wear and the whole theme of it – I hope it’s not triggering! – is having to celebrate a birthday in lockdown! It’s going to be camp and weird with lots of brocade and jacquard silks, then straight after we’ll be shooting the full extent of the summer collection.

Find out more about Lucinda Graham and A Quiet Ceremony.