BRIDES ON HORSEBACK, PYJAMAS, AND THE AMSTERDAM HILTON – WHAT IS IT ABOUT ROCK AND ROLL WEDDINGS? 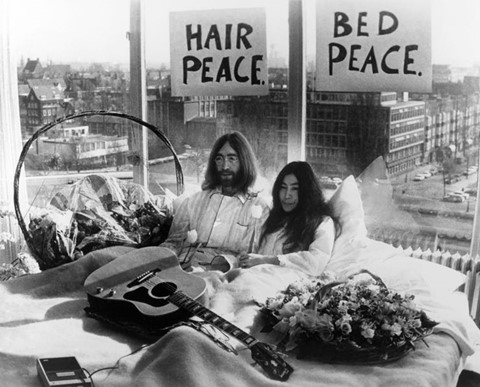 Weddings have always been the official symbol of love, the act of publicly officialising one’s relationship to be bound until “death do us part.” For the world of rock and roll this is no different. And just like many weddings and marriages, they can be pure bliss, heart-breaking, dramatic, or even scandalous. We took a look into the history books at some of Rock and Roll’s most infamous weddings, from the pure, to the purely outrageous. From Robert Smith and the first infamous gothic wedding, to the pyjama-wearing groom Kurt Cobain, and the hordes of screaming Beatles fans stopping at nothing to throw their undying love at Paul McCartney.

February 1995 saw the marriage of Tommy Lee and Pamela Anderson. What is most mesmerizing about the marriage between the Motley Crue drummer and the actress and model, was that the ceremony took place just 96 hours after they met. With a wedding that took place on the beaches of Cancun, in Mexico, they tied the knot while wearing swimwear – Anderson in a bikini and Lee in grey swim shorts. This unorthodox start to marriage was something that only foreshadowed their tumultuous relationship which ended in divorce in 1998 with Lee being charged with felony spousal abuse, leading to the drummer sentenced to six months in jail. 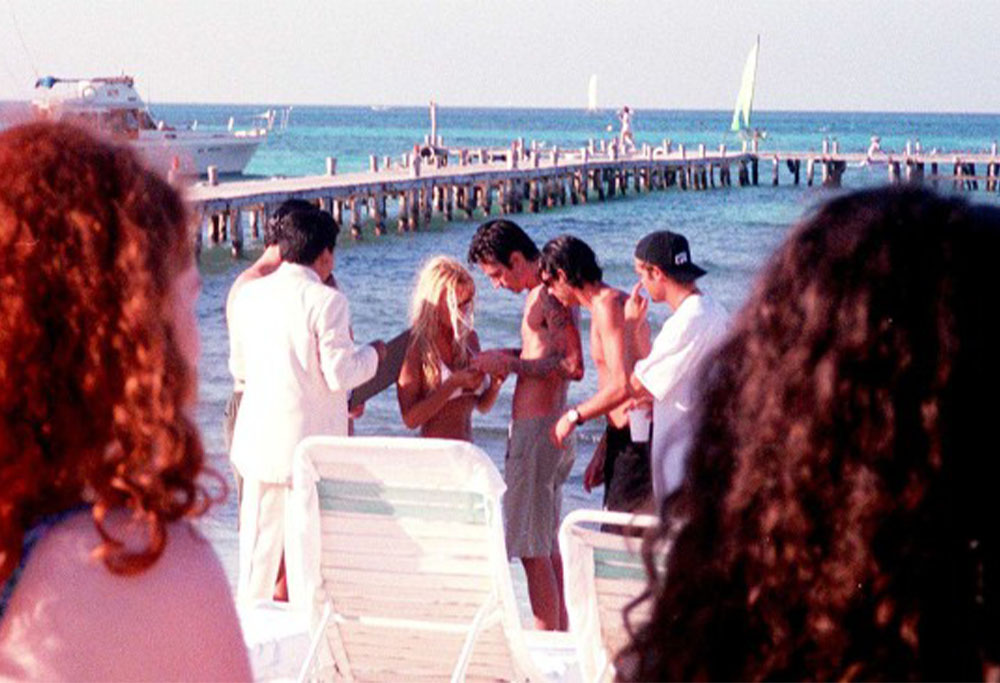 March 20th, 1969 marked the marriage of John Lennon and Yoko Ono. The iconic pair met in 1966 as Ono was preparing to open an art exhibit called Unfinished Paintings and Objects in London. The pair were already a couple before Lennon and Cynthia filed for divorce and planned their wedding after this was final. Initially wanting to get married on a cross channel ferry to France, which fell through due to Ono facing problems with a day visa, they made a plane into Paris. As for the ceremony, the couple were married in Gibraltar in a ten-minute ceremony. Known as the ‘Pillar of Hercules,’ and being symbolically called the ‘End of the World,’ the cople saw it as a symbolic foundation of their relationship. The ceremony juxtaposed the infamous honeymoon, the staged “Bed-In” for peace for the week of March 25th-31st in room 702 at the Amsterdam Hilton Hotel, as the pair dedicated their marriage to peace. This can all be heard yourself through The Beatles’ ‘The Ballad of John and Yoko’ 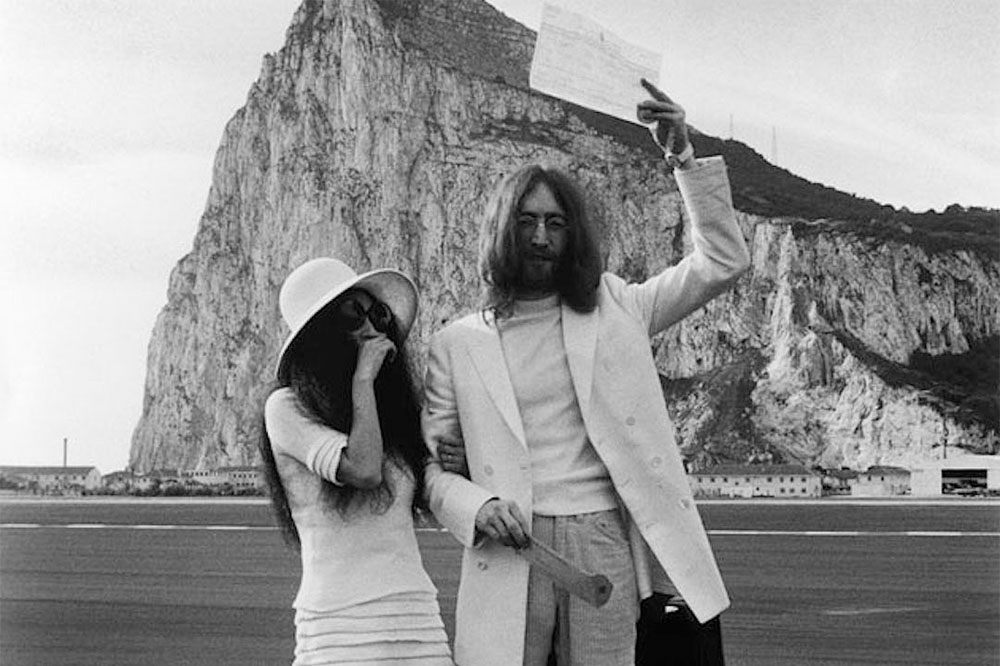 Two days after their legal ceremony, the Police’s Sting and actress Trudie Styler celebrated their matrimony with twenty-five guests at their Elizabethan Mansion in Wiltshire. On August 22nd, 1992, Styler rode in on horseback to the wedding, wearing an off the shoulder dress by Versace, and Sting wearing stripes, which was a tribute to the history of his nickname. The Police played a surprise set for the couple at the reception, in which Sting joined in, after more than six years passing since he had last jammed with his bandmates. “I had had a few drinks by that time, and I was kind of happy, so I said, ‘Okay, let’s do this’” 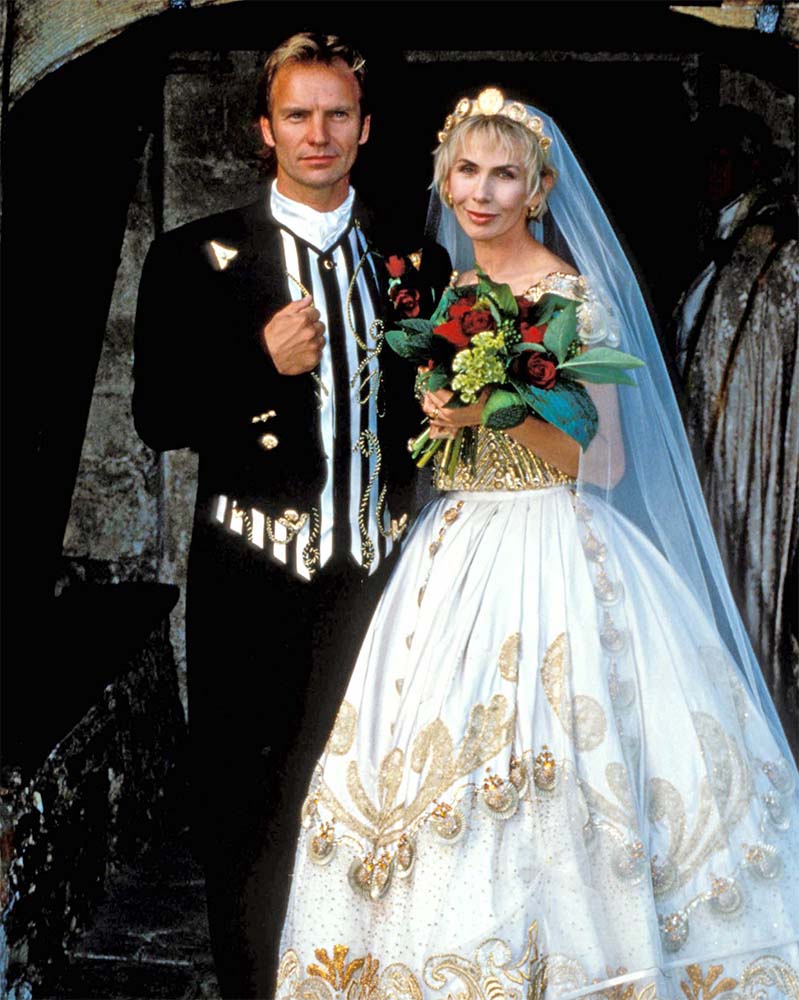 Despite your thoughts on Manson, the figure renowned for pushing the boundaries had this same attitude with bride Dita Von Tesse in 2006. This was to be expected from the non-typical Bride and Groom, as Manson himself had already been labelled as Satan Incarnate throughout the 90s due to his aggressive gothic rock. The ceremony was captured in the pages of the March issue of Vogue. Before the wedding took place, Vogue editor Phyllis Posnick, and photographer Stephen Klein collaborated on the iconic portraits of the couple for the issue. When it came to the big day, rather than hold a traditional ceremony, the bride and groom invited around sixty guests to travel Ireland’s Tipperary, to a grand gothic style mansion, owned by Gottfried Helnwein. It was not just the ceremony that oozed gothic charm however, with the banquet table lined with black and crimson roses, gold skull-shaped candles, and waitstaff that serenaded the guests. This mix of gothic glamour, and absurdity all housed within a grand setting, with lavish fashion was a wedding that will be forever timeless. 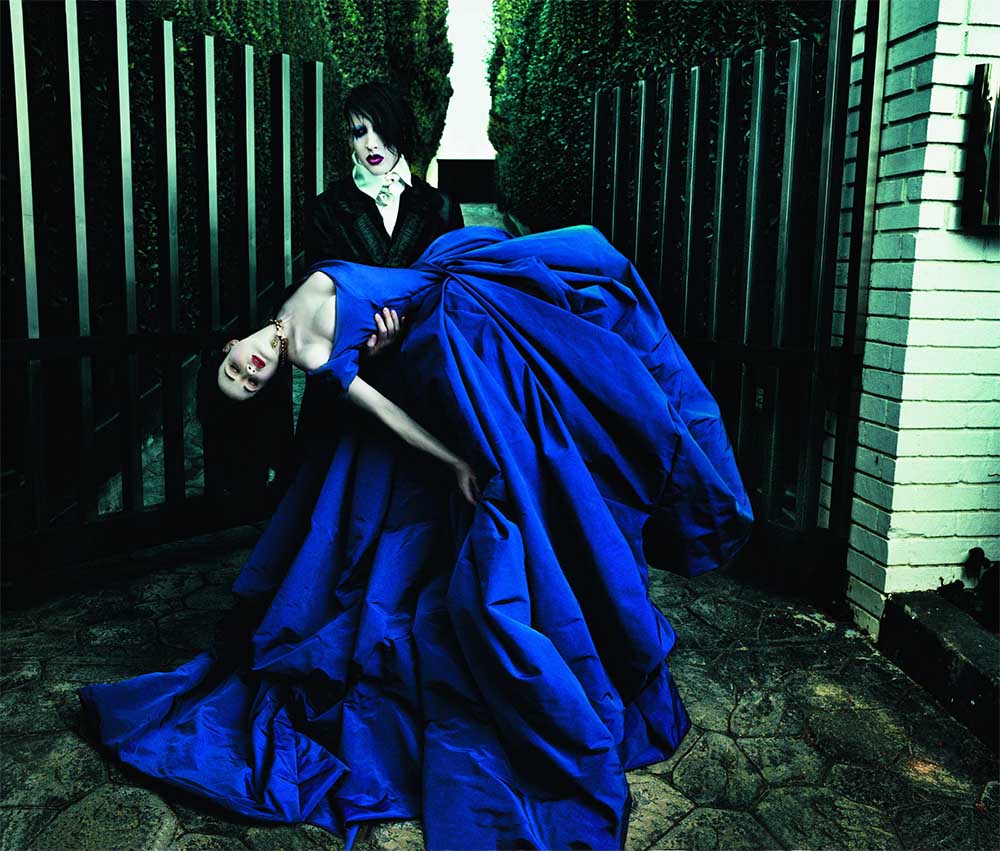 While being in perhaps the most influential band of the New Romantic movement, and being a cult figure in his own right, The Cure’s Robert Smith’s wedding and marriage to Mary Poole, is one of pure romance rather than grandeur. The couple have been together since the age of 14, married on August 13th, 1988, and are still together to this day. The lovers met at St Wilfrid Comprehensive school, where Smith asked Poole to be his partner for a school activity in drama class. The bride is said to have inspired some of The Cure’s biggest hits, including ‘Just Like Heaven’ where she appeared dancing with Robert on the cliffs of Beachy Head. As a wedding present to Poole, Smith also penned ‘Lovesong.’ 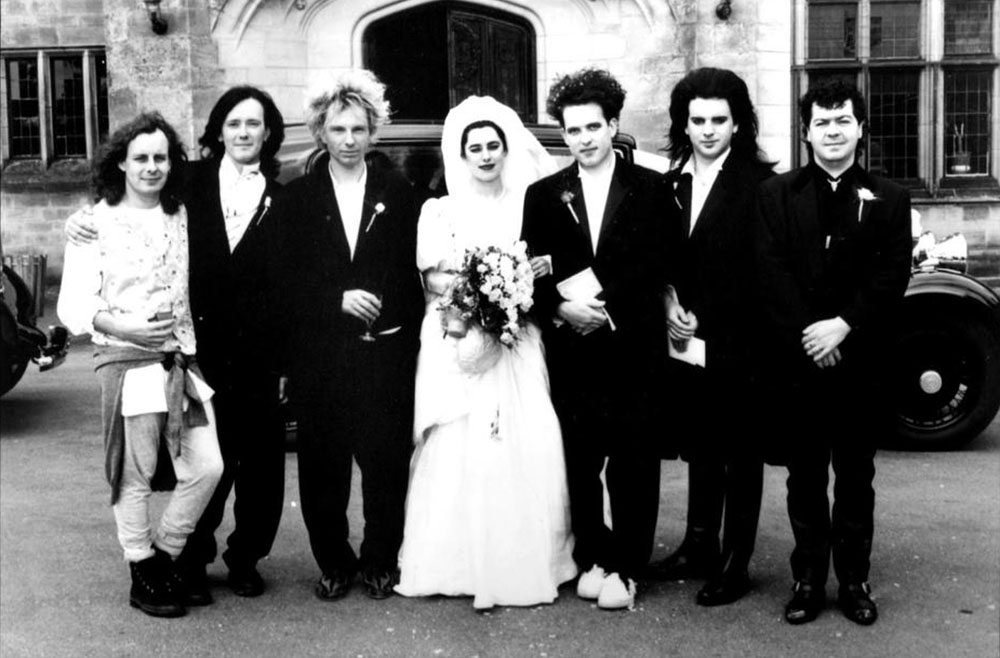 Two of rock and roll’s most infamous figureheads, Kurt Cobain and Courtney Love’s wedding ceremony was something that took no one by surprise. Known for his nonchalant attitude, rather than don a suit and tie for the reception, Kurt Cobain celebrated the matrimony in his pyjamas. At the time he said he was apparently “too lazy to put on a tux.” Taking place on Waikiki Beach in Hawaii on 24th February 1992, with only eight guests in attendance, including bandmate Dave Grohl. Courtney wore a white lace and satin gown, and at the time was already pregnant with their daughter Frances. 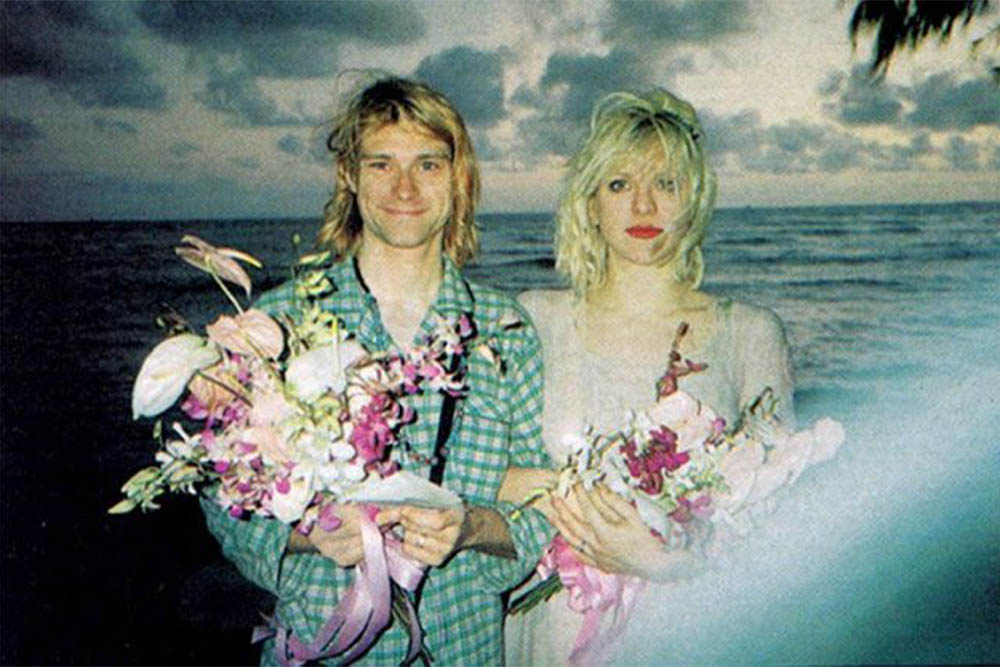 The king of glam rock himself, David Bowie married supermodel Iman on April 24th, 1992. The couple, that had met on a blind date in 1990, went full traditional for their wedding, and had remained together until Bowie’s tragic death in 2016. The rockstar wore a traditional black tuxedo, while Iman wore a classic white flowing dress to their ceremony in Tuscany. Rather than falling in love with the persona, Iman fell in love with David Jones. Despite their very private and loving relationship, the wedding was something that rocked pop culture, with Iman never remarrying after his passing. 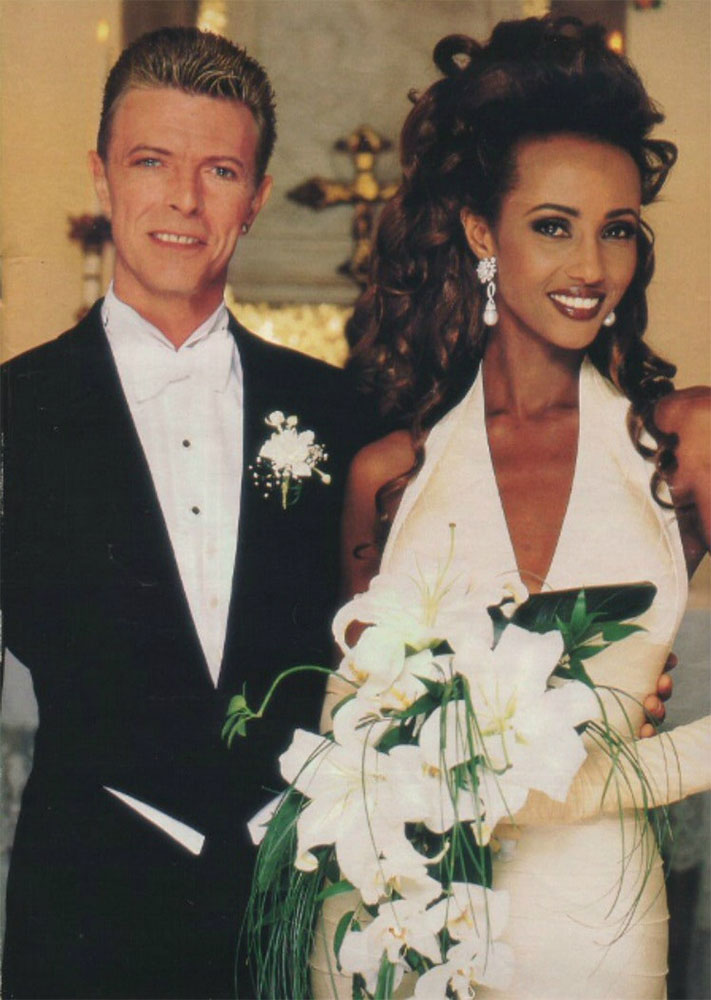 Little did he know it but the day that Paul Mccartney married Linda Eastman was one that upset many die-hard Beatles fans. March 12th, 1969 marked the day that Mccartney, who was the last single Beatle gave up his bachelorhood for holy matrimony. The weather of the day, which was rainy, and grey was something that reflected the heartbreak of the hundreds of fans’ tears at not becoming Mrs McCartney. Initially the ceremony had been planned to be private, but despite this the registry was crowded by droves of fans and press, with police having to be called to guard the couple from the flock of fans who tried to block their limo, all whilst screaming Beatles songs. The other three Beatles were not in attendance of the wedding, whether McCartney had invited them or not was unclear, however this was in the period where the group were breaking up, which was announced officially one year later. 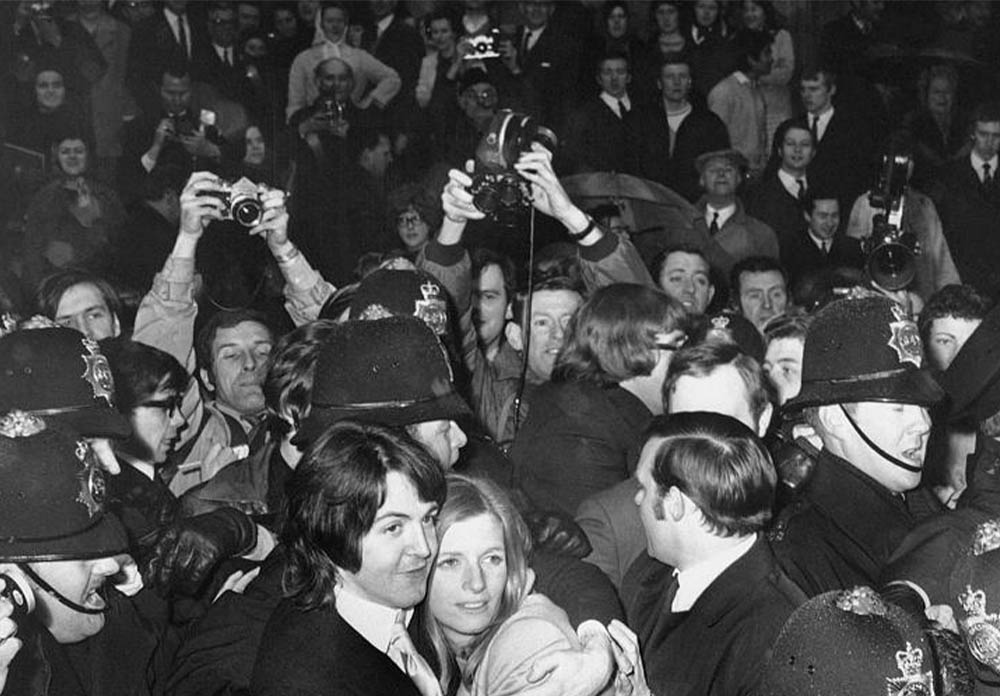