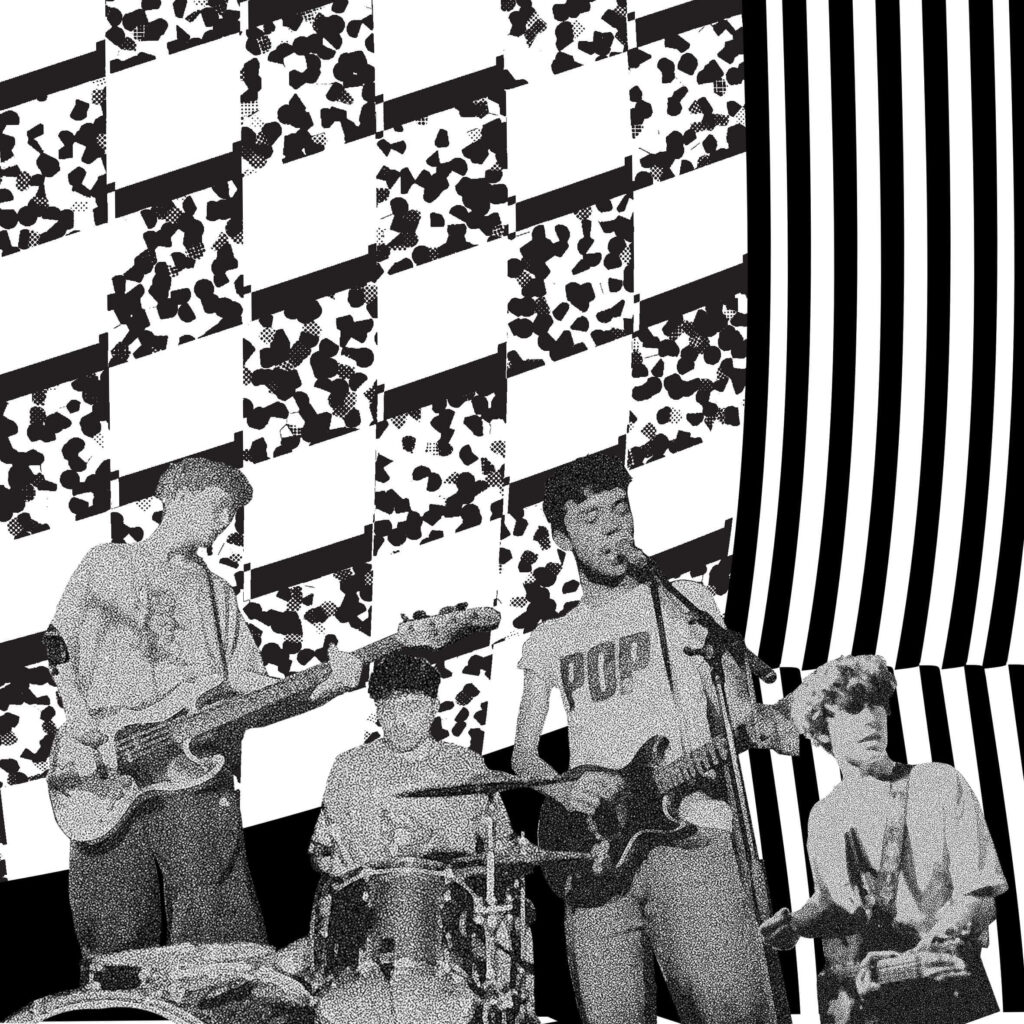 A mere few months on from their jagged EP, ‘The Effect of Tomorrow’ and the lads of Roxy Girls are back with another rampaging release. With intricate guitar lines so taut and dry; any tighter and they’d snap into complete chaos, Roxy Girls have managed to sustain the vitality of a live show despite a year of performance-less-ness. Words sang at a rate of knots, the angular songs of their new EP (to be released in August) are as swift as the band’s own creative mechanism. Ahead of their new single ‘Like a Buoy’, we caught up with the band to discuss their predictions for the future and plans for a full-length album.

Isaac: It was when we played a gig with The Futureheads, we were looking forward to it and building up to this moment and when we got there, we didn’t have a proper soundtrack. We got on stage and it sounded shit; I snapped two guitar strings, Tom snapped a guitar string and it was a disaster! Someone wrote a review about us saying that when they walked in, they thought we were all playing different songs at the same time. I thought it was a cool insult though because it made us sound like Captain Beefheart or something.

In 2020 you wrote that your “vehicle for creation got a flat tire” but you still managed, astonishingly, to release two EPs that year and you’ve now got another under your belt. Do you tend to produce music at a very rapid rate?

Tom: It’s what we’ve always wanted to do but we’re limited by how much we can physically create; there’s still a catalogue of stuff to be delved into and drip-fed out.

Matty: Aye, we don’t see each other that often so when we do, we’ve got to churn it out at a quick rate!

I: Even though we released two EPs last year it didn’t amount to what we wanted to achieve. We want to be a band that produces as much material as possible. We all like when you find an artist and they have such a big back catalogue of tunes. We’re going to start recording our album next month with the aim of getting 20 songs recorded. A lot of the songs are under a minute long, we want to do our equivalent of Wire’s album, ‘Pink Flag.’

Your new EP (The Roxy Girls are In the Drink) has all the Roxy Girls’ traits of raucous wit. ‘Like a Buoy’ is the first single, what’s the story behind that track?

T: I’d had 6 months or more of scrolling through Tinder obsessively, the song is about when that comes to an end and you don’t need it anymore. It was about looking back at endless swiping; in a strange way it is a love song in a sense.

M: We recorded it in January so it’ll be 6 months when the EP is released in August.

Do you think the lockdown and events of the past year have altered the way in which you make music, or approached this EP?

T: The collective frequency between us all has changed because we couldn’t be in the same room, but then we’ve always not seen each other very much. Aidan lives in Leeds, Matty lives in Newcastle so getting together only happened to play a gig or practice. We’ve written more over lockdown, it’s just the process of amalgamating it all between us that has been scuppered by the pandemic.

You’re a Sunderland-based band yet you’re from all over the North East, how has the area affected you as a group?

M: I was a bit scared to tell my family (laughs) but I don’t mind us being called a Sunderland band.

I: It’s all so close, it is daft there’s any beef in the first place.

T: It goes back hundreds of years, it’s down to allegiances in the last Civil War…

I: I’ve been playing gigs in Sunderland for almost 10 years, the music scene has never been too active but audiences are expanding now. Tom Robinson is very supportive of North East bands.

T: That directly led to us getting signed; Marc Riley heard about us from the Tom Robinson Radio 6 exhibition, we did a session for Marc and that’s how we met Moshi Moshi; that showcase of North-Eastern bands led directly to us moving a step up on the ladder.

You’re off on tour with Mush later this year, what are you most looking forward to regarding live shows?

Aidan: Service stations! spending all our money on meal deals and petrol.

I: Me and Matty sat on each other’s laps going down to London, crammed in Tom’s car with all the amps. I’m really missing that (!)

M: It’ll be mental just to be in front of people, I can’t remember what it’s like.

I: Our problem is we’ve got too many songs! The material we put out last year hasn’t been played live yet. It’ll be mad for the people who’ve seen us before because we’ve progressed so much in that period of time.

The effect of tomorrow remains to be seen, but if you could hazard a guess, what would it be?

I: There’ll be those things to stop people’s bikes getting stolen with underground storage rooms; it’ll totally get rid of bike crime. 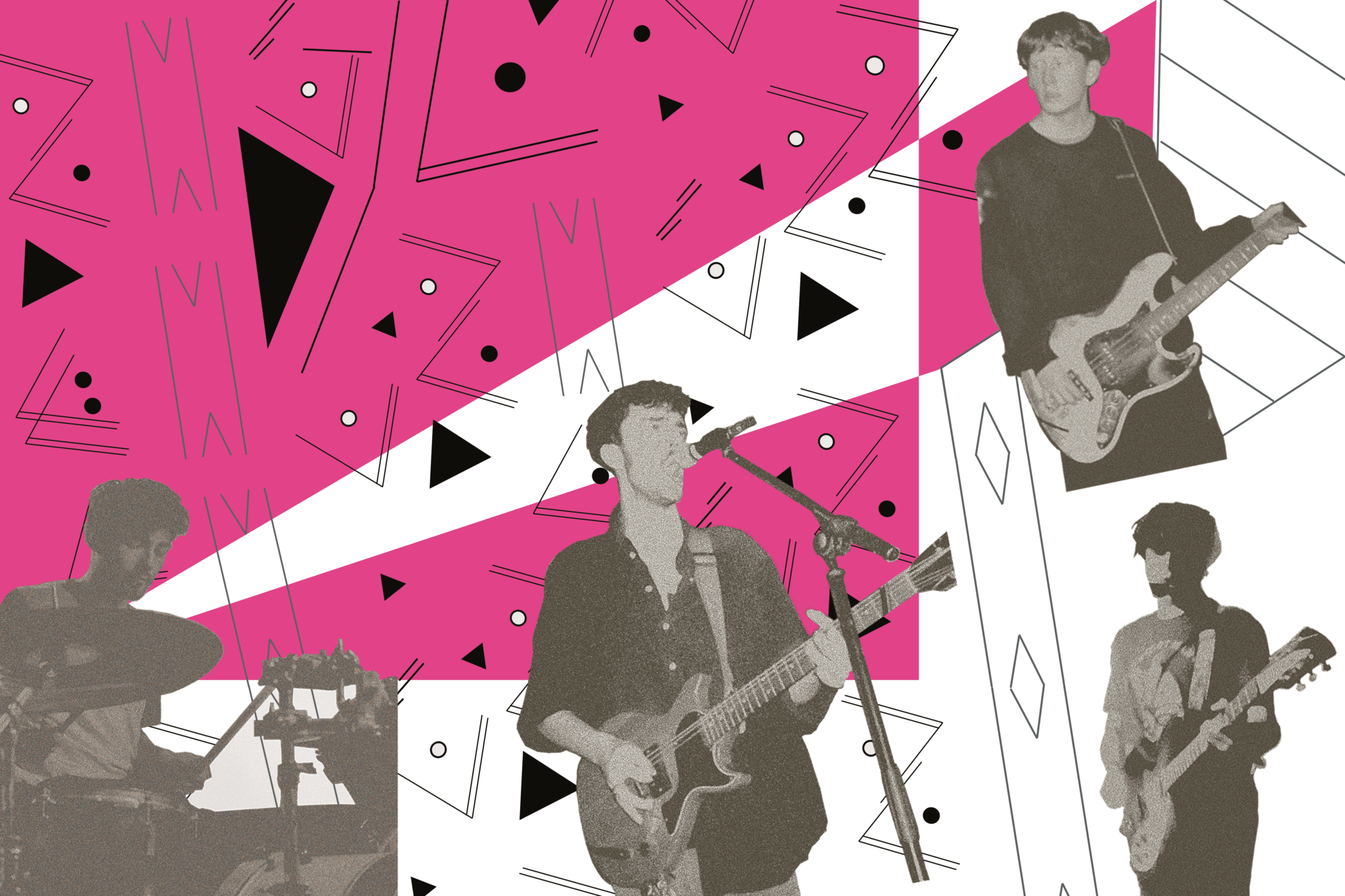