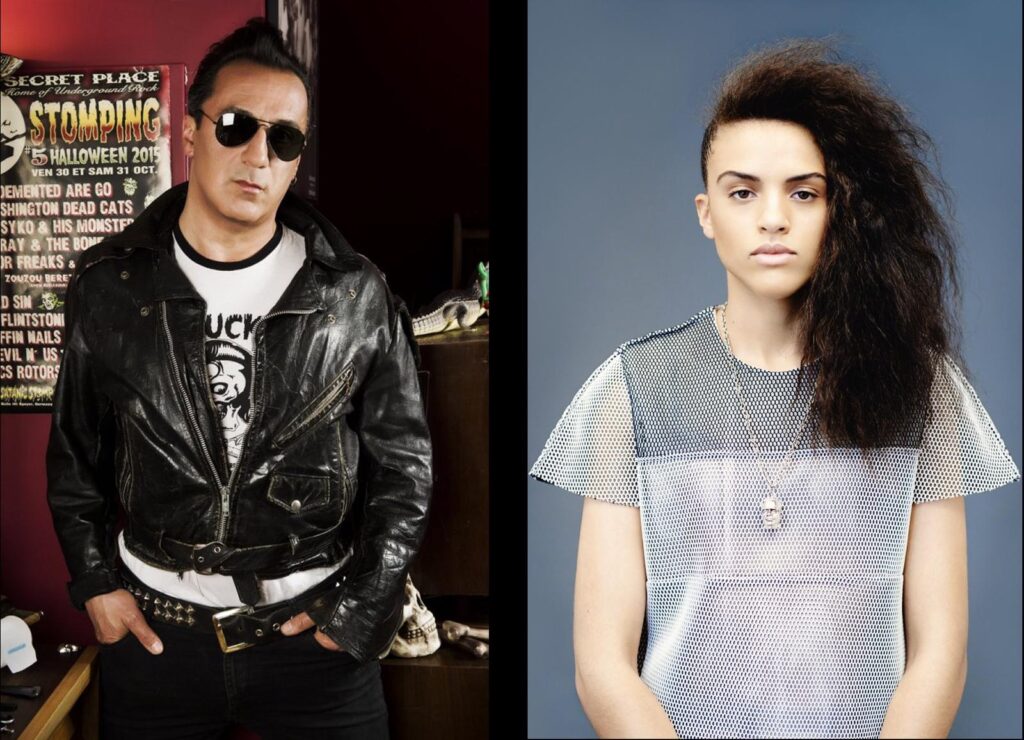 Rude GRL & CC may be a relatively new band (their first EP ‘LIKE WOW’ was released in January 2021) but their credentials stand them in good stead. Having worked with Lou Reed, The Slits and, most notably, Adam & The Ants (they even used to hang out in the original UNDERGROUND shop) Chris Constantinou’s extensive experience is offset by the spoken-word vocals of Jenna Dickens (Rude GRL) and Bunni Morretto. Harnessing the defiant spirit of punk and hip hop, the trio amalgamate their influences to protest minority prejudices.

How did a rapper, burlesque dancer and Adam & The Ants’ bassist come to form a band?

Rude GRL: I first met Chris when I was about 17, through an A&R at Sony. We worked together for a while & I remember it always being such a laugh; we really got on. I then had a bit of time out from music when I got sober and dealt with some past trauma. Chris texted me a few years ago at 3am (!) saying that he was doing a ‘live music meets hip hop’ project and asked if I wanted to be involved. We had so much fun that we decided we should start a band! I’ve been in a relationship with Bunni Morretto for 6 years and brought her down to the studio. Chris’ eyes lit up when he saw Bunni’s unique style and heard her voice.

Chris Constantinou: We don’t like to mess around in studios for ages doing take 99 of one word. We had an hour to kill before Rude GRL got her train home so thought we’d whack something down, ‘LIKE WOW’ was written in 10 minutes.

Is your name a reference to Rude Boy & Girl culture?

RG: Yeah man! Growing up in Wales at the time I had to experience a lot of racism. When I found out about two tone and the original skinheads, (not the Nazi ones I was being attacked by) I was just blown away and loved the idea that music and culture van bring people together. Our house growing up was always full of Rastas and the outside full of skinheads; I just really wished everyone could get along. So, I really felt the original Rude Boy / Rude Girl culture spoke to me. I really hope we can bring some of that back with our music.

How does your range of experiences and influences inform your sound?

RG: I used to write for an escape as a kid, I started writing at the age of 8 or 9 and the songs were quite dark. Then I started experimenting with having fun and playing with words. I do like to write about my truth but in an uplifting and hopeful way. Influence-wise I love so much different stuff; I’m very inspired by punk artists as well as Rap-Rock like Rage Against the Machine and Cyprus Hill. It’s more the energy that I take inspiration from.

You’ve covered a few of your favourite Clash songs – how did you go about taking on and transforming such iconic songs?

CC: Carl Peel at Universal, who I’ve worked with for a long time and had commissioned many crazy projects for me – (including making albums in places spanning from Chernobyl to Joshua Tree) – asked if I would be interested in covering some Clash songs, so I asked Rude GRL if she would she be interested in doing these; she literally screamed “HELL YES!” Rude GRL laid the vocals for the four Clash covers at my studio in 3 hours, all one takes; then she had a cup of tea and I had a few beers…

How have you been navigating lockdown – both as individuals and as a band?

CC: As a band we have been working on new tracks and the 2nd album via file exchange and sometimes (when possible) we’ve gotten together for sessions. As far as business goes, for the releases and interviews, we’ve been on Zoom a lot!

RG: Recently lockdown has got a lot harder to stick through to be honest. Bunni had Covid back in February 2020, then my Grandma died from it, then I had it around a month ago; it’s so difficult to live through this madness and so many people are suffering. As a band, we’ve been pretty tested too; if the pandemic wasn’t happening, I’m sure we’d be playing live and recording lots of music.

You released your first EP in January, what was the build-up and response like?

RG: It really is awesome to start to get our music out there! It’s really nice to see people relating to it too! Winning an Award was a pretty sick highlight and being a part of Vive Le Rock-down was a lot of fun. I just can’t wait to get this next stuff out as we have so much in store.

What’s next for Rude GRL & CC?

CC: We have some photo and video shoots with some legendary photographers coming up. Then we have the build-up to the KILLER 16 EP which starts in a few weeks …. we are writing and recording our second album as well as 4 tracks for Universal themed on Female Empowerment. 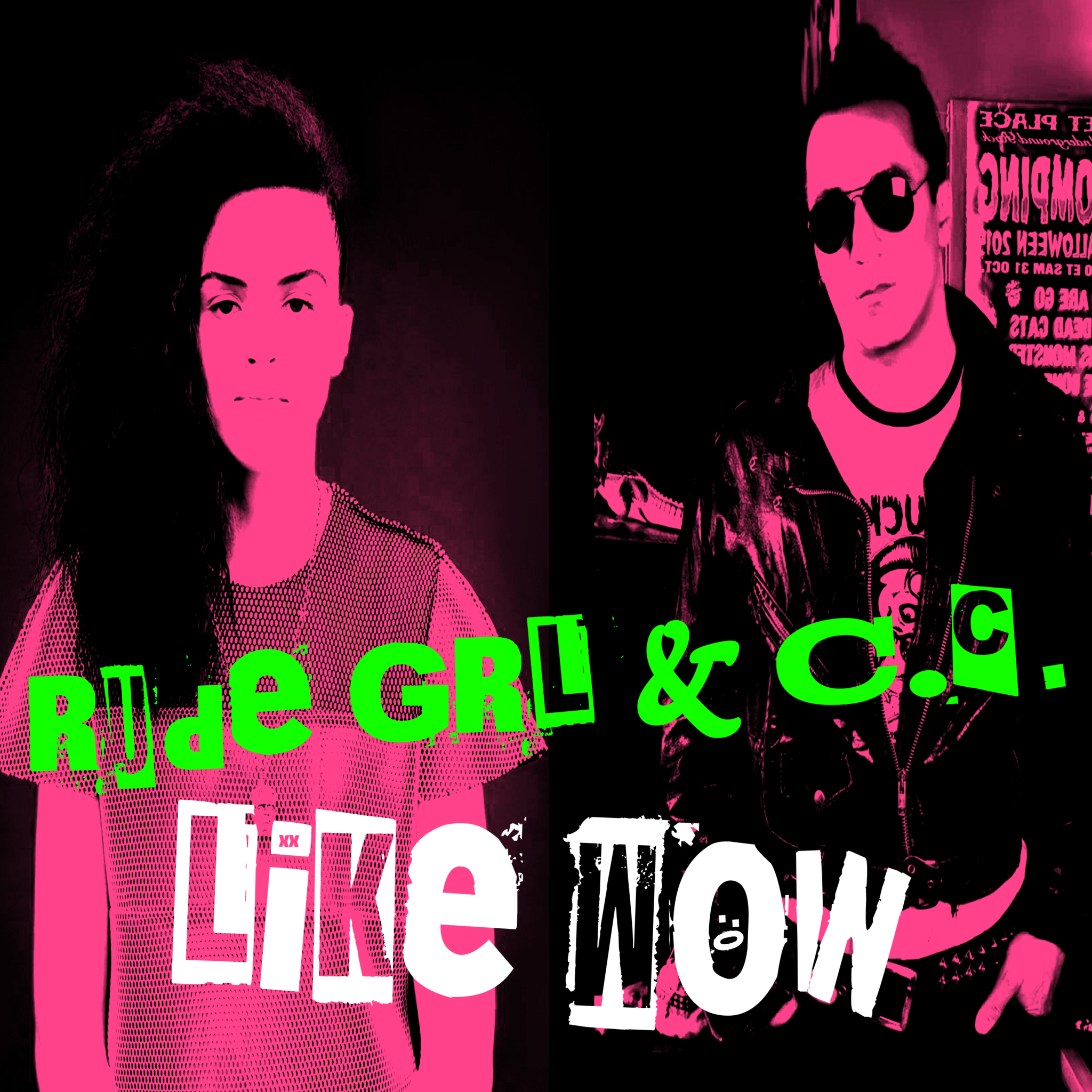