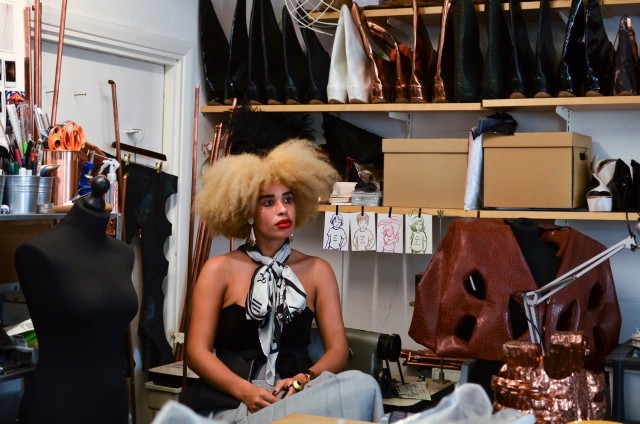 Frieze Art fair is coming to London this October, and we are thinking sculpture. Luckily we don’t need to travel far from our base in Shoreditch to find what we are looking for, the streets of East London are adorned with sculpture and expression and the hands, eyes and minds making it happen aren’t too far either. We were lucky enough to meet up with the beautiful talent that is Sadie Clayton this week and have a chat about her passions and plans.

Sadie Clayton is a young designer and sculptor practising in London. After graduating from a Fashion Design degree three years ago, Sadie has continued to work with the material that she chose as her own during her studies, Copper.

Copper is one of the oldest known metals and has played a major role in human civilization. Said to run through the veins of the planet, the metal is an excellent conductor of energy and this is true scientifically as much as it is considered to be spiritually. Ancient civilizations including the Egyptians, Sumerians and Phoenicians utilised copper for centuries as their main metal and it is now safely in the hands of Dalstons.

Considering herself a luxury sculptural designer, Sadie believes that fashion and sculpture live in a very similar realm. Her pieces often sit on the fine line, similar to the likes of Alexander McQueen and Iris Van Herpen.

Sadie Clayton’s consumer doesn’t want to mindlessly follow trends, she wears what she wants, she likes bars over clubs and is not particularly interested in fitting in. Sadie cuts for the female body however designs for a profile as opposed to gender, last season’s presentation at Cafe Royale saw a man don her pieces as naturally as any women.

A running theme of Sadie’s work, aside from Copper, is crystals. She pulls three from her desk and shares with us their properties and healing qualities. A Copper stone is included among the handful and we are informed that it brings luck. Spirituality is clearly important for Sadie and her love of the shape and form of crystals is apparent throughout her art work. Although interested in all of their purposes, it is the aesthetics that most inspires her. 3D shapes and jagged edges appear across collections in the form of embroidery, windows in fabric and asymmetric cuts.

Upon asking about her favourite project to date, we are introduced to the most dazzling waistcoat and skirt. The front sections of both pieces consist of small copper saddles meticulously tied together using elasticated fishing wire, thousands of these little half rings join to become an opulent copper chain mail 2 piece. Working with Copper is Sadie’s favourite and many of the pieces that can be seen at her studio are created solely from copper, fixed with a whip stitch of which is also made from copper sheet. This innovative use of lacing in such an unconventional material is what led to Sadie being able to exhibit and demonstrate her technique at the Tate Britain as part of the McQueen/Waplinton exhibition in the form of two workshops that focus on working with alternative materials in fashion.

“It’s really important for me as an emerging designer to work with other brands that can do what I can’t.”

This means working with startup brands to working with global companies. An exciting project she is working on currently is with Nixon watches …. Sadie shares a story of her wanting to work with Swarovski, calling them on her lunch break and ending up pitching to them during her lunch break shortly after!

“It’s about reaching out there, if you don’t ask you don’t get!”

Constantly watching other designers isn’t something Sadie is bound by, she focuses on what inspires her and this results in a fresh style that can’t be found elsewhere. Clayton would most like to dress Iris Apfel after meeting her once and finding her energy unforgettable.

Sadie Clayton is due to have a very bright future, she plans to visit Miami’s Art Basel this year and has trips to both Paris and Shanghai in the pipe line. Watch this space… 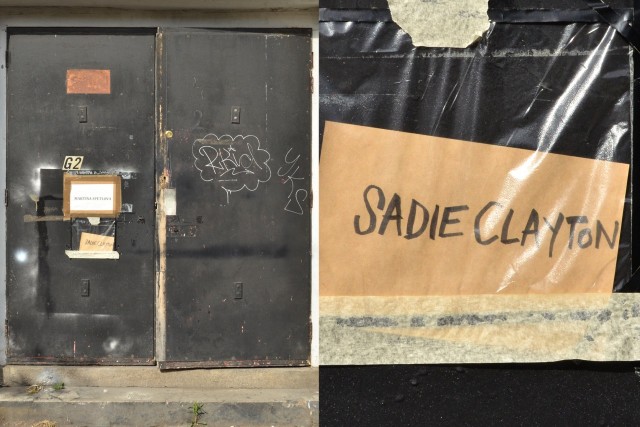 To find out more about Sadie visit her site: http://sadieclayton.co.uk/

Or check her out on social media: