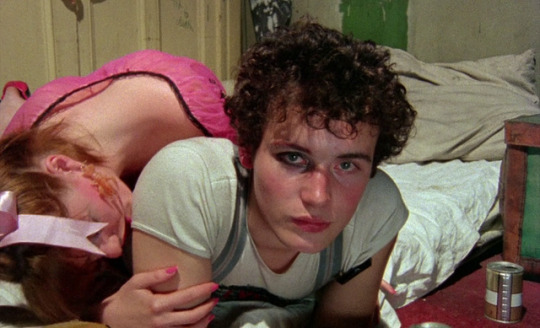 Shot in the wastelands of London over six weeks in the summer of 1977, Jubilee makes reference to the Sex Pistols’ incendiary ‘God Save the Queen’ and the monarch in question in the year of her silver jubilee. In Jarman’s precarious and perilously low-budget project, Elizabeth II has been mugged and murdered, her crown stolen by the gang leader of Jarman’s ensemble of punk-ish urchins. Yet it is with the first Queen Elizabeth that the film finds its disorientated bearings. Birdsong scores the opening credits, though any expectations of peace and antiquity are dashed as Queen Elizabeth I is transferred to Jarman’s present by occultist John Dee and a Shakespearian spirit guide. It is here, in this present-past or past-present where Jubilee unfurls like barbed wire. London is a wasteland of decay and distress, a desolate dystopia in which St. Paul’s Cathedral is a disco and Buckingham Palace is a music studio. This is a place of plastic and concrete; the “seasons are regulated by thermostat.” In this desolate landscape, clusters of punk characters run riot, wreaking havoc like the ‘droogs’ in A Clockwork Orange. The aforementioned crown-thief, ‘Bod’, is a lithe sadist who takes joy in force-feeding ketchup to a greasy-spoon waitress, ‘Mad’ is a hyperbolic pyromaniac with a bright orange crop, ‘Amyl Nitrate’, played by Jordan, is a warped historian, ‘Crabs’ is a promiscuous groupie who becomes obsessed with ‘Kid’ (Adam Ant) and ‘Sphinx’ and ‘Angel’ complete the group as a pair of incestuous brothers.

The loose narrative is strewn with aggression and narcissism, this film does not hinge on synchronised plot or nuanced character development. As later noted by Jarman, “Jubilee was structured like a collage, created from juxtaposition, it’s parochial, too particular, juvenilia, and at times silly.” Indeed, Jubilee’s haphazard nature could account for the unsavoury, or perplexed, responses the film garnered when released in the February of 1978. Adam Ant, then a relatively minor figure in the punk demi-monde, took his mother and nan to the premiere: “I was embarrassed by the film to be honest; it seemed like a complete mess on first viewing.” Siouxsie Sioux allegedly deemed the film “hippy trash.” Vivienne Westwood, a stalwart of the punk movement, printed a damning open letter on a t-shirt. Denouncing Jubilee as the “most boring and disgusting film” she had ever seen, Westwood fulminated “But self-indulgence is not the answer. You have to be brave & you are only a little.” Though rumours that Jordan’s character ‘Amyl Nitrate’ was an unfavourable satirical sketch of Westwood may have incensed the designer, Westwood was correct in citing self-indulgence in her lengthy T-shirt tirade. The film IS pretentious, it contains grandiose, affected proclamations such as “You wanna know my story, babe… It’s easy… This is the generation who grew up, and forgot to lead their lives!… They were so busy, watching my endless movie”, but perhaps, pretentiousness is the point.

That the ever so outrageous punks were outraged by Jubilee is no mean feat, turning director Derek Jarman into something of an iconoclast. The nudity, casual violence and contrary, anti-establishment statements were Jarman’s way of calling the punk bluff, having previously described them as “petit bourgeois art students”, once glam-rockers who are “now in the business of reproducing a fake street credibility.” Borgia Ginz, a character symbolic of blood-thirsty media moguls, laughs dementedly “As long as the music’s loud enough, we won’t hear the world falling apart!” Recognising that punk was a nihilistic reaction to the contemporary ills of society and politics, Jarman predicted that punk’s cacophony would signal its own downfall. Jubilee was an omen for the implosion of punk; The Sex Pistols split a month after the film’s release. 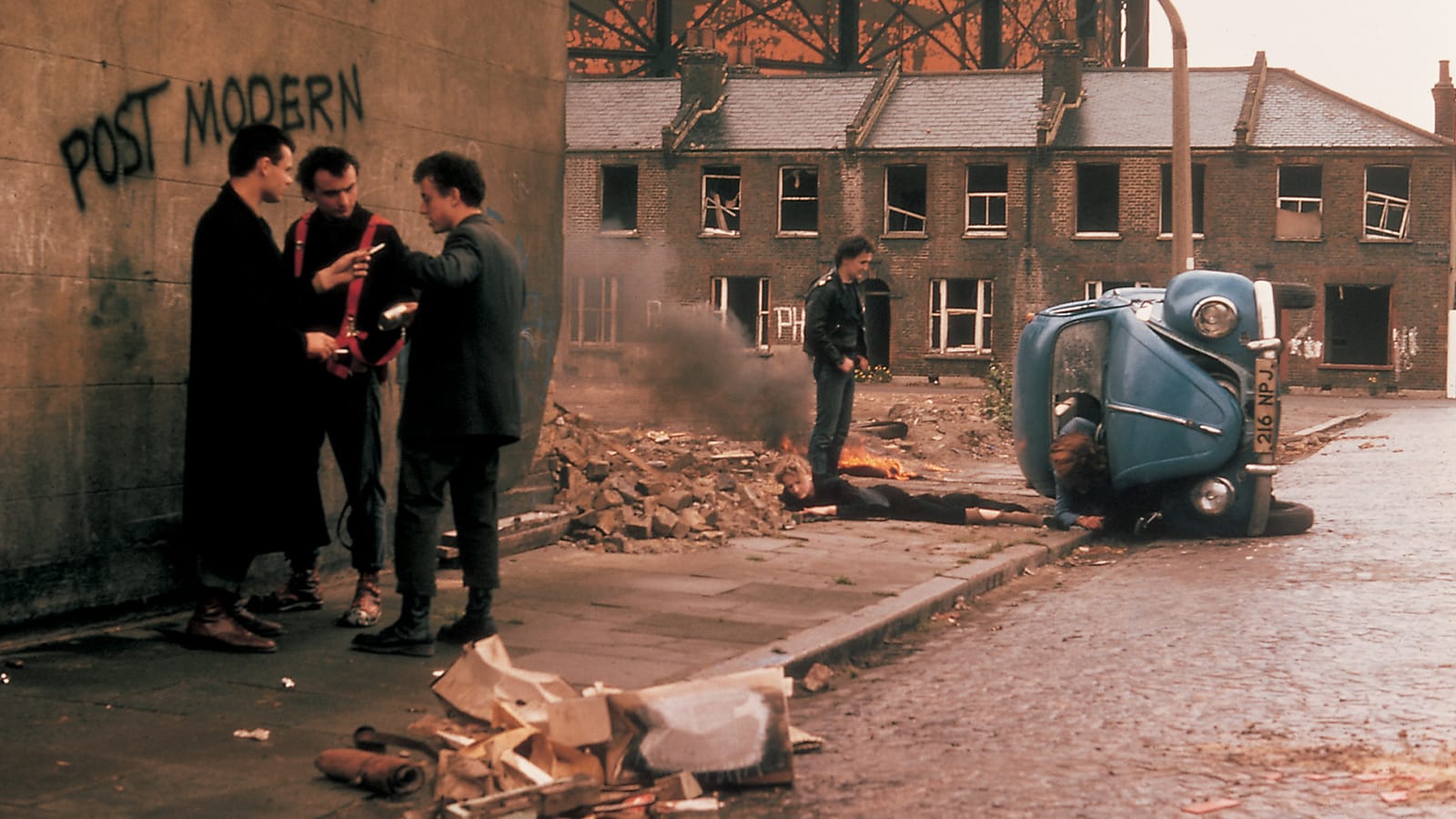 In the anarchist topography of Jubilee, Jarman crafts an anti-parable of shallow ambition. Kid, Adam Ant’s dazzling, mumbling singer with aspirations to MAKE IT BIG, is warned about the pitfalls of fame-seeking by Angel and Sphinx (the aforementioned incestuous brothers who have kinder dispositions than their cruel clan), “He’ll steal your voice and sell it. He just wants to package you. And when he’s through with you, you’ll just be another face on another cover.” In Jubilee, Kid ignores this caution about Ginz, the media tycoon. Shortly after his TV debut, Kid is violently killed alongside Sphinx and Angel. In reality, Adam Ant disregarded the Icarus-like fate of his character. When Adam Ant asked Malcolm McLaren to manage his band, McLaren proceeded to pilfer Ant’s band to form Bow Wow Wow, leaving Adam high and dry.

“Without progress life would be unbearable”, Borgia Ginz says, “Progress has taken the place of heaven.” This statement, however vacuously uttered in the film, is even weightier today. London today is a bastion of progress, of gentrification and harsh proficiency, the metropolis today is as culturally ravaged as it was visually in Jubilee. The squats and wastelands of Bermondsey and Rotherhithe – the licentious playgrounds of Jubilee’s characters – are now culturally cleansed and extravagantly expensive.

“Painting is extinct” declares an artist, Viv, early in Jubilee’s ambiguous plot, “Artists become blood donors, their life blood drips away until they’re bled dry and the people who control the world make it as inaccessible as possible by driving the artists into corners.” Jubilee, with its minuscule budget and experimental uncertainty, would not exist if it was made in 2021. Jubilee, then, is a warning masked by chaos. Glimmers of hope prevail in the form of nature, a garden of plastic petunias foreshadowing Jarman’s own bucolic maturity – his garden in Dungeness is recognised as one of Jarman’s creative masterpieces following his death from an Aids-related illness in 1994. 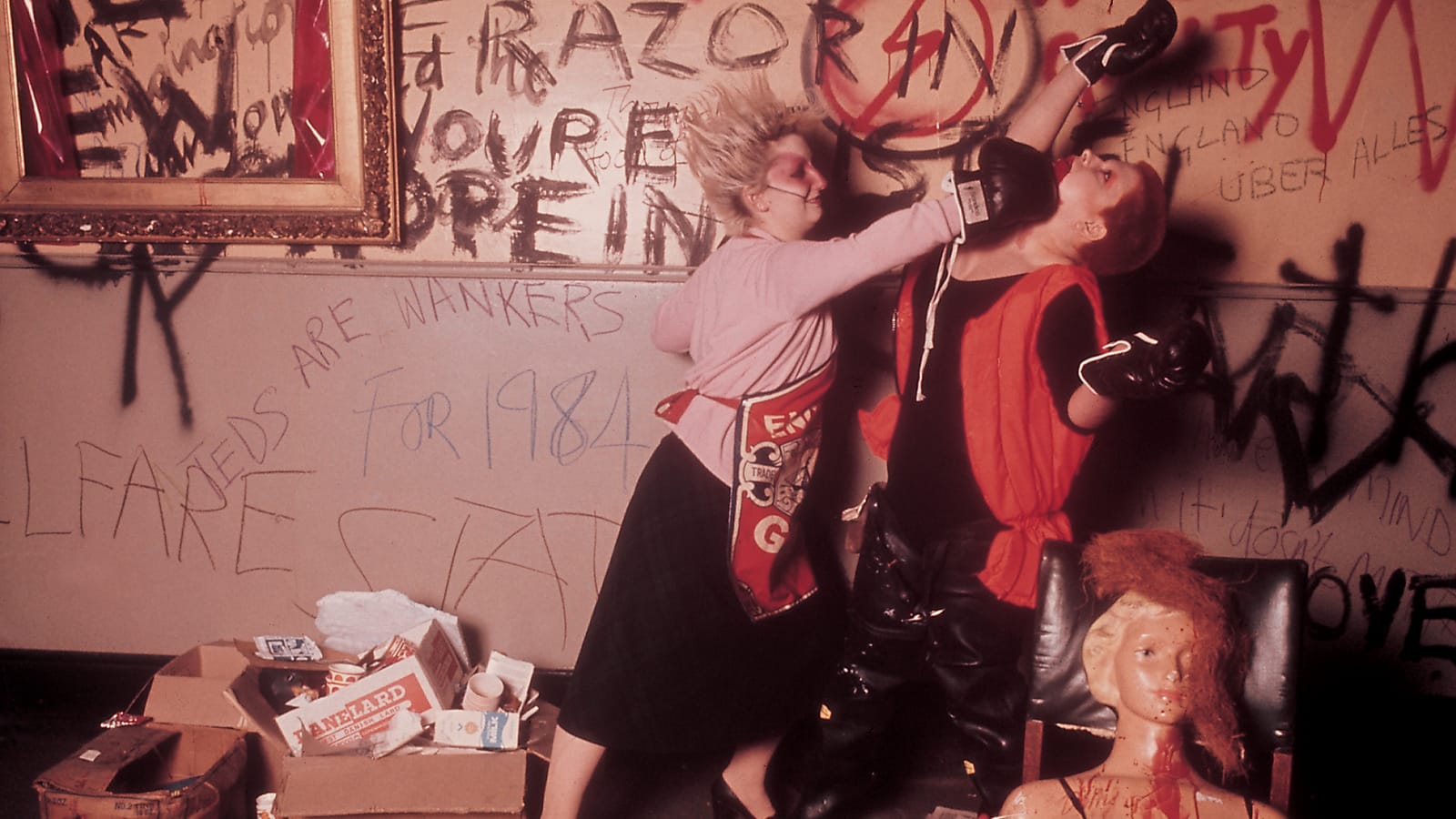 Recognised as the first punk film, Jubilee is truer in the punk spirit of visual profanity and DIY grit than any other film or documentary produced at, or about, those turbulent times. Whether viewed as a nostalgia evocation of the green and pleasant lands of Elizabethan England, a spiky, ludicrous work of avant-garde art or a dystopian prophecy is up to the viewer of this piece of cult cinema. “You see it is dangerous”, Viv continues in her discussion about the fate of art, “Our only hope is to re-create ourselves as artists or anarchists and release the energy for all.” Caustic, compelling and calamitous; Jubilee is a release of energy.

For Underground, the purveyor of subculture inspired alternative footwear, including Brothel Creepers, the screening is part of the 40th anniversary and continued engagement in all things subculture, Underground and Rebel Reel Cine Club have teamed up to present the film as a first in a series of subculture film screenings. Each film selected is a subculture classic that captures a seminal event or ground-breaking moment in the underground world. Presented in outdoor locations that capture the atmosphere of the film itself, each screening is a unique opportunity to view a classic in the company of a limited audience.
The screening of Jubilee will be preceded by a compilation of short films by Julie Verhoeven and a presentation of the photography from PUNK LONDON 77, the iconic work of Derek Ridgers.
The screening is at Strongroom Bar and Kitchen Courtyard, 120 Curtain Road, Shoreditch, London EC2A 3SQ, doors open at 19.00 and the film is at 21.00 with DJ and a bar and hot food open until midnight.