Ten Songs with Social Messages: These Emerging Bands Are Making a Statement 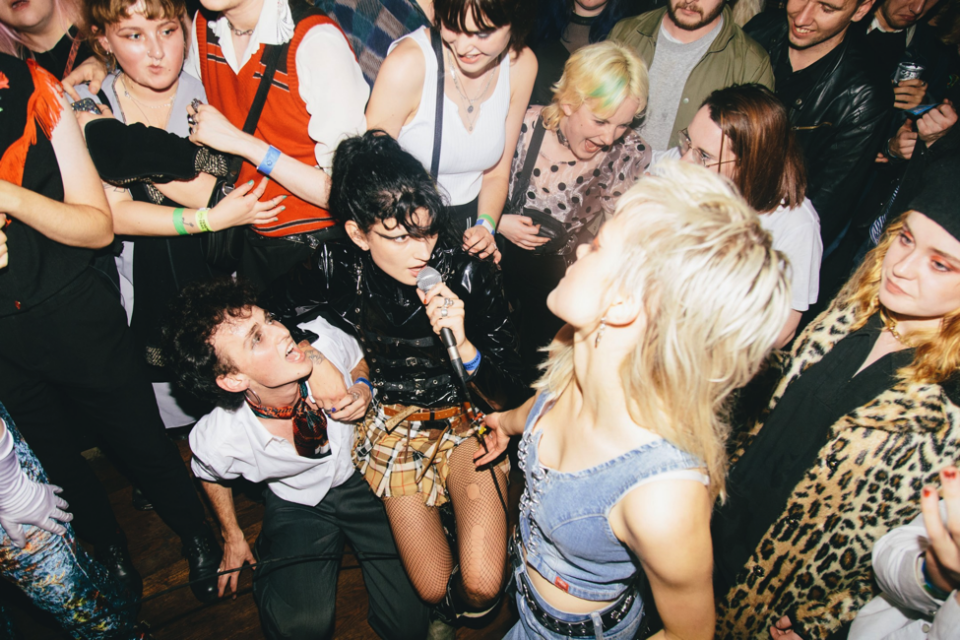 Throughout the ages, musicians have taken it upon themselves to discuss the wider issues surrounding them. From the politically-charged ‘God Save The Queen’ by the Sex Pistols, to Micheal Jackson’s soulful plea for nature in ‘Earth Song’, and his fight against racial injustice heard in ‘Black and White’. Within a similar vein, one of the most influential feminist punk icons Patti Smith’s uplifting and politically-centred ‘People Have The Power’ perfectly paved the way for modern protest songs.

Now, the torch has been passed on to the poets of our generation, who aren’t shying away from expressing their thoughts on the various issues in our society. From discussing the environment and feminism, to offering much-needed reminders for our everyday life, they’re rightfully making their voices heard by delivering these songs with social messages.

Check out these ten songs with social messages

Cardiff-based Mawpit are using their voice to promote environmental awareness with their debut track ‘Nature’s Curse’, which was written in response to the Australian bush fires occurring at the time. Songwriter Cait Johansen, was also inspired by Greta Thunberg’s moving words, ‘our house is on fire.’ This led the song to be written in the perspective of Mother Nature by asking the question “why do you burn me down” and “why do you slay all my children, feast on my friends”. The three-piece have a range of musical influences, culminating in this grunge-fuelled, alt-rock song. This impassioned and furious track is reinforced with gritty guitar riffs and thumping drums. Certainly, a message to take heed of.

‘MY BODY. MY CHOICE’ by PUSSYLIQUOR

The feisty and outspoken PUSSYLIQUOR share their protest against those who believe that it is their right to take ownership of women’s bodies. In just over two loud and proud minutes, the Brighton-based band makes their opinion on the matter known. With grating guitars, beating drums and biting lyrics, it’s riot grrl energy in its finest form. The repetition from vocalist, Ari Black, on the chorus “my body my choice, my life my voice” ensures their message hits home. Feminist and uncensored, this is definitely one of our favourite songs with social messages.

‘Who Asked You?’ by Nia Wyn

On her latest track ‘Who Asked You’, North-Wales based artist Nia Wyn is tackling the stigma around mental illness, from small-town mentalities, to receiving negative energy from others. Inspired by the likes of Billie Holiday and Lauryn Hill, it is a neo-soul track with meaningfully crafted lyrics to match. Her unique vocals are layered at times with a ‘call and response’ style of harmony – together they are essential for carrying her important message across.

It is a track about dealing with unsolicited opinions from others and to rise above the judgmental comments given by them. There’s also an underlying message of karma, and a reminder that negativity will only hold back those who choose to spread it.

‘Cut Your Hair’ by Walt Disco

Intent on tearing down any conceptions of toxic-masculinity, Walt Disco are anything but afraid to let their opinions be known. The new-wave band has quickly emerged on the Glasgow music scene by successfully combining theatrically and poignant song-writing. And their latest track ‘Cut Your Hair’ (2020) is no different. “Living too fast but going nowhere, stuck in the past, you lost yourself there”. The lyrics are accompanied by cries of “Cut Your Hair” in the background, adding a psychedelic nature to this guitar-synth driven track. Their music video for the song is also a quintessential visual accompaniment, making it one of our favourite songs with social messages in this list.

Neo-soul band, ZEBEDE, has been making a name for themselves since their formation in 2018. Their track ‘Hold Up’ discusses racism and how it has been experienced by many. It’s a beautifully smooth and soulful track. From its ethereal backing vocals to the light instrumentals, the tune makes sure you pay close attention to the lyrics. The mention of the “hunting ground” and “people dying” accurately reflects the dire gravity of the situation. The song also questions those who were previously thought to be helping, but are now having their real motives examined. The band is keen to spread awareness of these issues, further stating that the track won’t be granted an “expiry date”.

‘All My Friends Are Drunk’ by Brooke Bentham

South-shields native Brooke Bentham uses her alt-indie sound to share her poignant thoughts with the world. Her lyrics are characteristically honest and voiced with such raw emotion. ‘All My Friends Are Drunk’ is taken from her debut album Everyday Nothing and was produced by Bill Ryder Jones. It is about having an existential crisis, something which most people can relate to. The soft strums of the guitar reflect the melancholic mood of the track. Bentham stated, “I wrote the lyrics about growing older, and growing apart, and learning about yourself”. It may not be as hard-hitting but Bentham’s commentary on life is a much-needed reminder for many.

‘Into Sunlight’ by In the Morning Lights

Forming in 2018, Leeds based duo, In the Morning Lights, consists of Matilde Mirotti and Frankie Harper. Featuring both hip-hop and soul elements, the blending of vocals ties the song together. The dual vocals featured on the track are scripted to be heard as two sides from the same coin. It is described by Harper to be about a “secret love affair” and “the conflict between right and wrong and into desire”. By questioning love, morality and human nature, it cleverly unpacks the issues of infidelity, a topic that seems to be prevalent in our modern world. The opening line reveals, “three lovers, one plays the fool”, an interesting take on human fallibility.

London-based band Hawxx’s latest track ‘Dogma’, acts as a dramatic call to arms. A metal-rock anthem, it is powered by thunderous drums and heavy guitars, and strengthened further by snarling vocals and doses of unfiltered attitude. She’s hellbent on reminding us to not “let anyone else tell you who you are.” This fierceness demonstrated by the band is no surprise, after discovering that they named themselves after the bird of prey, with the extra X’s representing the double XX female chromosome.

‘Better Than This’ by Van Houten

Psych-pop band Van Houten’s latest track ‘Better Than This’ acts as an answer to the feeling of anxiety about the future and how we should remember to live in the moment. It is topped off with a contrasting synth-pop melody, allowing the lyrics to shine. Lead vocalist and guitarist Louis Sadler commented that, “the song addresses how easy it can be for life to pass you by, especially when you’re always focusing on the next step, or bigger picture.” It’s a useful premise from the Leeds-based band, acting as a universal reminder to take notice of time passing. To recall Ferris Bueller, “if you don’t stop and look around once in a while, you might miss it.”

‘Good Girls Do Bad Things’ by Lucia & The Best Boys

Glasgow-based Lucia & The Best Boys are breaking down constructs of femininity with their track ‘Good Girls Do Bad Things’ on their Eternity EP (2020). Bolstered with its ever-changing tempo, frontwoman Lucia Fairfull explained how the indie-rock track is about men making her feel vulnerable and making women feel insecure. Led by punching snare hits, growling vocals and reinforced by fearless lyrics, it’s an empowering track acting as a message for the ages.