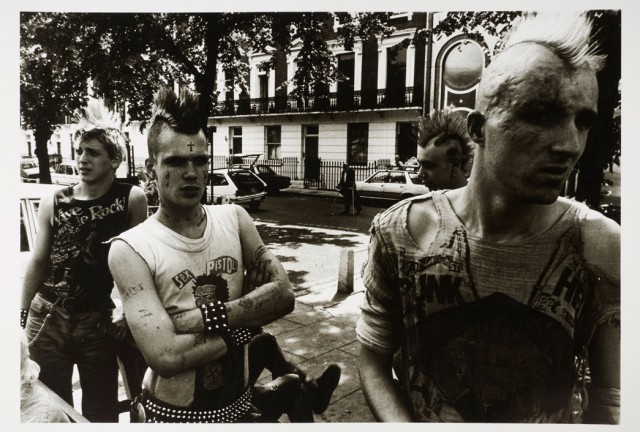 Voyeurism, emotion, glamour, London’s social scenes of the 70’s and 80’s … these are just some of the elements that make up the donation of exclusive photos from photographer Dick Scott-Sewart to the Museum of London, curated by Anna Sparham.

Anna came across the photos and brought them on a nostalgic whim, whilst reminiscing as an adolescent during the late 70’s through the eclectic music, chart radio and TV such as Top Of The Pops. Though still a young lady in the Punk’s heyday, Anna recalls the time of her experimentation with Punk inspired fashion and her longing to be part of the very exclusive scene.

This was also something that captured Scott-Sewart’s interest when photographing the once leading youth subculture. The sociable photographer snapped everything from the tattoos, the aesthetic and delving beyond this into their idiosyncrasies. This consisted of Rockabillies, wrestlers in action and the eccentricity of the crowd to cross dressing showgirls and voyeuristic angles of strippers. Specific shots and camera angles were used to accentuate emotion with and transport the viewer into that particular event.

Part of what makes photography magical is taking it that one step further, going beyond aesthetic and becoming acquainted with and understanding your subjects to get a more sincere shot. Scott-Stewart successfully captured such powerful snaps by befriending his subjects, such as the image of the rockabillies who played up to the cameras and presented a scenario worth snapping – attitude coupled with humour, the perfect portrait of their immature stance.

“..Photography is just an excuse to meet interesting people. It is a passport to situations that I like to be involved in” – Dick Scott-Stewart to SLR Magazine, April 1983

This statement is clear to see from the engagement with those he photographs – his empathetic nature towards people who lived on the fringes of society and the hardships of life. The photos in the exhibition collectively showcase the essence of 70’s youth subculture, groups and crews bonding to unite against conventional living.

In 1974 his book ‘Fairground Snaps’ was released, including most of his work during a long-term project and now available at the National Fairground Archive.

The photos that have been donated to the museum include 117 photographs, a hand made wrestling folio and a group of shots from New Romantics to jive dancers. All photos embodying performance highlighting the strong connection between the photographer and his subjects which Anna wanted to include his strongest work and testament to his magnetic character.

Stomping Grounds is a celebration and portrayal of various subcultures in London during the 70’s and early 80’s. Scott-Stewart passed away at aged 54 in 2002 and due to his self-deprecatory attitude; this halted his work from going any further. Anna’s mission with the exhibition is to ensure Scott-Stewart’s work is not ignored by bringing attention to his work for the current and future generations to witness his significance in British photography history.