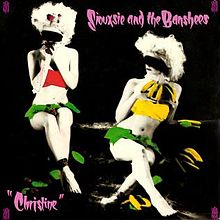 The song Christine by Siouxsie and the Banshees marked a turning point in terms of sound for the British post-punk band. Budgie and John McGeoch replaced John McKay and Kenny Morris; and experimentation with drum machines, acoustic guitar and synthesizers superseded their usual motifs. Released as a single from their album Kaleidescope in 1980- the combination of electronica and the dark story behind the lyrics saw it creep up to No.22 in the UK charts. The album reached No.5 overall.

But what is the dark and heavy meaning behind Strawberry Girl? The title seems innocuous. Yet the song was inspired from when bassist Steve Severin discovered the sad and harrowing tale of Chris Costner Sizemore, the muse behind the film The Three Faces of Eve. Her story of struggling with dissociative identity disorder, experiencing a total of 22 personalities, has captivated the world for decades. The names strawberry girl, banana split lady and turtle were all names that her children gave her different personalities.

She tries not to shatter

Personality changes behind her red smile

Every new problem brings a stranger inside

The hit was praised by the industry and fellow musicians. Bobbie Gillespie of Primal Scream fame recalls why he loves Christine: “That’s the idea, yeah” to use the conventional way of constructing a pop song to communicate what I feel about the world and my take on relationships. It’s a twist that makes it darker than it seems. When we were growing up, Siouxsie and the Banshees were doing this kind of stuff, they were getting in the charts with songs about mental hospitals! ‘Christine, the strawberry girl, Christine, banana split lady’ they were writing about a girl with schizophrenia! They were getting in pop magazines and on TV; they were getting played on daytime radio. It’s f**** subversive! They were outsiders bringing outsider subjects to the mainstream”.