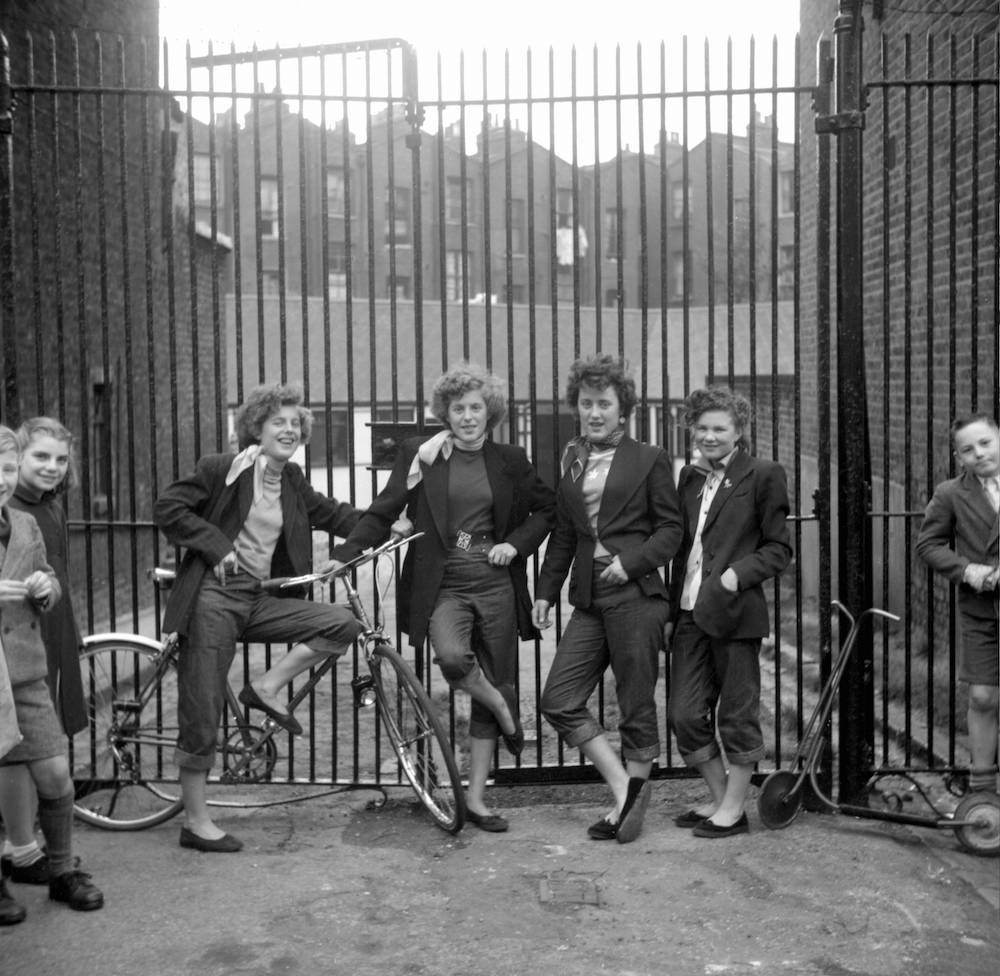 Photo by Ken Russell – January 1955
The Last of the Teddy Girls
Elsie (15) and Rose Hendon with Mary Toovey and Jean Rayner (14) in front of the Seven Feathers Club in Edenham Street, North Kensington.
©2006 TopFoto/Ken Russell

The Teddy girls aren’t quite as recognised or remembered compared to the Teddy boys back then and now. Sexist? Well not much has changed.

The Teddies originated from the working class areas and started to appear during the early 1950s. It was considered to be one of the first post – war youth subcultures created in Great Britain. Contrary to what people think this subculture was not influenced by Rock n Roll music but rather born out of boredom. It was also a response to rejecting the austere approach of the post – war economy whilst keeping their interests in film, music and drinking. The boys and girls of this subculture were categorised and looked at differently. Boys were perceived as violent, rebellious and only looking for trouble whereas the girls roles were more focused around the home however they still wanted to express their own sense of style.

Ken Russell; a photographer and director was one of few who paid interest in the Teddy Girls rather than the boys, Even the Teddy Girls, all dressed up, were quite edgy, and that interested me, they were more relevant and rebellious – but good as gold. Most of the Teddy Girls would have left school around 15 and worked in a factory or did some sort of secretarial job. They worked hard and used their money to buy clothes from second hand shops unlike the boys who would save up and spend £30 to get a tailored suit. Both genders aesthetics would link back to the Edwardian Era – they would take the upper class elites look and mix it with a more relaxed approach. Similarly to the boys the Teddy girls would wear drape or tailored jackets with velvet collars. They would switch up the outfit and add accessories like a clutch bag, straw boater hat, espadrilles, pencil skirts or rolled up jeans to add a more feminine touch. Unlike most working women of that time who were relived to no longer have to wear pants and can wear more feminine, skimming skirts, the Teddy Girls wanted to adopt the more masculine styles.

One of the girls that posed for Ken Russell, Rose Hendon, 15 said, We weren’t bad girls, we were all right. We weren’t drinkers. We’d go to milk bars, have a peach melba and nod to the music. Clearly there is quite a difference between the boys and girls of this time; the girls didn’t appear as interesting to the media as they weren’t violent or rebellious enough but this doesn’t mean they should be lost within the subculture? Subcultures are about a group of people that feel slightly isolated within society, coming together to create something of their own. This creates quite a paradox due to the alienation of the girls from the boys within the subculture itself. This translates to our current day as rock and metal concerts are still alienating women. Kristy Love from the Houston Press, writes Women who are metal fans come under the constant scrutiny of male metal fans, and have their motives questioned. They’re either assumed to be a poser or a girlfriend, no more than a fan by association. Over 50 years later and there is still this stigma that men and their views are more important and notable than women?