The Damned play New York – The Brits are coming 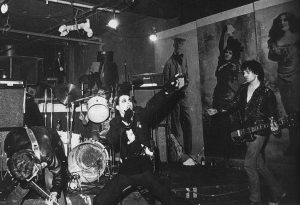 When asked to name a British punk band, there’s always a shout out for The Sex Pistols. Everyone is familiar their antics and their spot centre stage in the Punk movement but this blog is never in the business of ranking or point scoring. We try to deal with the facts and we will throw in our opinion from time to time, So we just want to mention that there was one single that beat the Sex Pistol’s Anarchy in The UK for the much debated title of First UK Punk single and that has to be New Rose by the Damned.

We have to wind back to the 1970’s and in the depths of New York city stood one of the greatest grassroots music venues of all time. CBGB was a venue based in New York City owned by Hilly Kristal. CBGB stood for Country Bluegrass Blues and was first intended to play music from the genres of its name. Country, bluegrass and blues were booming in America during in the year of 1973, when the venue first opened its doors. Despite Hilly’s intentions, there were never many harmonicas or acoustic guitars found at CGBG- instead, the venue as if by fate, soon became the stomping ground for American punks. The new-found youth subculture needed somewhere to call their own. They needed somewhere where they could make a name for themselves and were free to express their eccentric style without criticism from the sensible of society. CBGB threw its doors open to the early punks, allowing them to develop the scene and became a much needed pillar of the punk subculture.

It was the place to be in the 1970s to catch the likes of Patti Smith, Ramones, Talking Heads, The Cramps, Joan Jett and The Dead Boys. Punk bands were not a rarity at CBGB in the mid 1970s. Punk was booming in the USA. It was the exciting new youth culture that kids wanted to be a part of. It gave the youth a chance to have something that was just theirs. They could rebel against the authoritarian system through the mediums of clothes, music and attitude.

On the 8th of April 1977, the Damned spewed onto the small stage CBGB. This deafening set at the dark 350 capacity venue allowed The Damned to set records for the first British punk band to ever play America. America was jam-packed with new punk bands but never before had one come over the water from the land of tea drinkers: the Brits were coming. On that game changing evening at CBGB Dave Vanian sported his (now) famous vampire-style get-up. Vanian wore dramatic stage makeup, and finished the look with a three-piece suit. I feel with a vampire on vocals, the Damned were hard for the American audience to ignore. They bought to the States everything that their punk scene was missing- the somewhat manic performance which British punk bands perfected. The Damned pushed boundaries that night and bridged the ocean that stood between the USA and UK and their respective punk cultures. This was in the times before Soundcloud and Spotify- Record imports and the odd T.V show were the only source of recorded music that people had from elsewhere in the world; to hear new music you had to get down to clubs.

Last year, The Damned celebrated 40 years of delivering their sound. On the sold-out tour they filled venues such as the O2 Academy, Brixton and the Dome Concert hall in Brighton.

So there you have It this band we know so well who have acted as a soundtrack to the youth of many once started out playing dark, sticky bars what were infused with the scent of urine and fermenting alcohol. From the CBGB bar New York 1977 capacity 350 to the O2 Academy Brixton 2016 capacity 4921 people. A little reminder that Punks not dead I guess.

We wanted to try and catch a bit of the atmosphere that night at CBGB. I suppose like any one of those seminal moments it was once of those gigs where years later many will lay claim that they were there. Usually 10 times the number that could actually get into the place a bit like the Sex Pistols at the Lesser Free Trade Hall in Manchester. But we caught up with one of the 350 from that night- Brad Berlin. 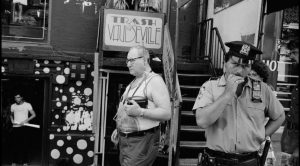 How can you discuss this turning point for punk when you were not at the gig?, I hear you cry. Well, just for you Soundwave hunted down Brad Berlin, a music loving New-Yorker who has left the punk scene behind to work on his acoustics business. Brad may no longer often find himself pogoing to an eccentric new punk act in the depths of CBGB, but he was once a big player on the punk scene.

BB: I was at many shows at CBGB as I worked as a soundman for a few bands, always let music people in for free to make the scene. I remember Captain Sensible in a nurse’s outfit, it was great.

What can you tell us about the venue?

CBGB was an incubator of creativity. It was fuelled 100% by its owner, Hilly Crystal. Hilly was truly a great & wise man, a committed friend and supporter of the arts. He created the scene by letting artists and their technical people free admittance almost every night. The tourists were the only ones paying for stuff. We all felt welcome. You could be at the bar drinking with Blondie, chatting with Joey Ramone or Tom Verlaine from Television. Hanging with Cosmo in the light perch was always exciting.

This was before anybody became famous. Everyone felt it was an oasis for society’s musically deviant, everyone was accepted.

The beauty of NYC is the ethnically diverse culture, this was reflected in the music, and wildly different styles were accepted. Everybody listened to everybody, no attitudes or bullshit. If someone had something to offer, everybody would get into it.

I worked in the UK during this era. The UK bands only hung out with like-minded souls of their specific style, and would take a piss at anyone else. The camaraderie between bands in NYC was non-existent in London. Very interesting for me.

What was the best gig you ever went to at CBGB?

I think it was Patti Smith, it was a big deal, line out the door and you had to pay, ouch. It was multiple shows over several nights.

Or Iggy Pop with David Bowie playing piano. This was a fierce gig, Iggy nailed it, rolled around on the stage in broken glass, blood everywhere, fucking awesome.

Or the first show of the Dead Boys, they rocked our balls out of our underpants.

Or Talking Heads as the original trio, Tina, Chris & David, when doing songs from the first record.

Or any of the Ramones shows, I must have seen 30 minimums.

When did you first hear about The Damned? How did you get to hear about the gig?

As I remember it, they were the first punk group from the UK, we had a big buzz in CBGBs.

Were The Damned very different to the American punk bands that you had seen previously? How so?

They were aggressive and the singer wore big black eye makeup, Capt. Sensible wore a nurse’s outfit. They were polished pandemonium. They didn’t hang out afterwards as most of the NY bands did.

Would you say that you were part of the punk scene at the time?

Yes, it was a great fertile music scene. Punk for us NYers was about attitude and being creative. It was not being anti everything assholes. We didn’t give a fuck about what anyone thought, allowing the freedom to go there, wherever there was. Talking Heads were preppies from Rhode Island School of Design, Ramones were rabble-rousers from Queens, both were considered punk.

We have a big thing here at UNDERGROUND about keeping the independent venues and clubs alive. You must have seen the changes- What’s your take on that?

No idea, sorry. The whole scene is dead in NY, it only exists at universities.