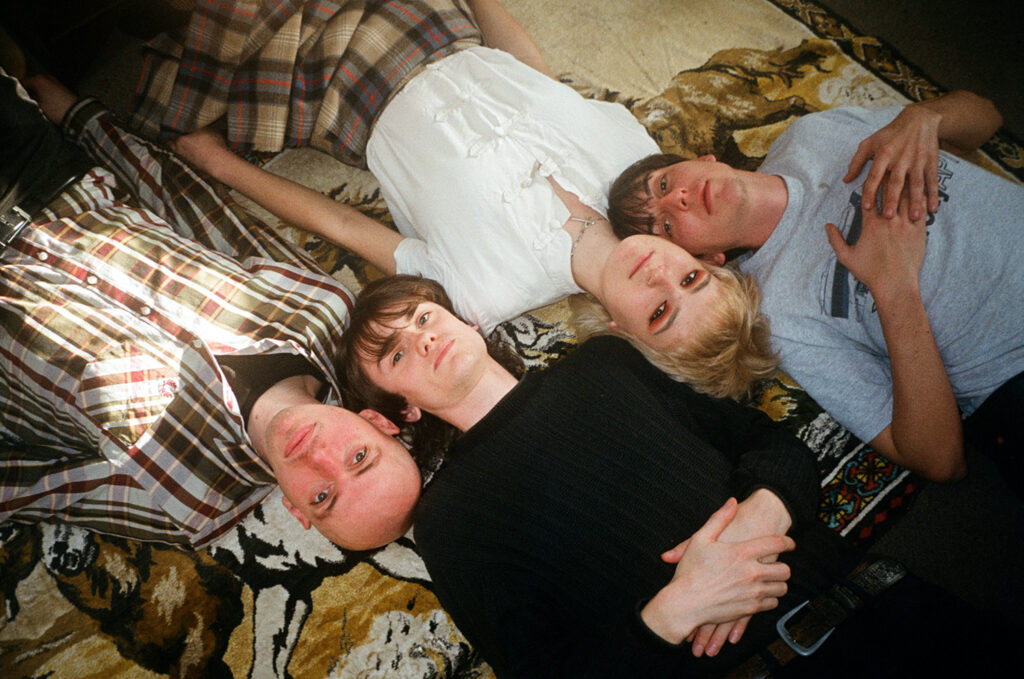 “I don’t like the taste of water in the city, I don’t like what it leaves in my mouth” declares singer Adam Hopper on Blanketman’s ‘Leave the South’, their last single released before they unveil their debut EP National Trust on the 19th of March. Though a personal rather than political preference (and an inclination towards softer tap water), Blanketman have been at the vanguard of new Northern music; unintentionally redressing the geographical focus of contemporary post-punk. With a running time of just over a mere 20 minutes, all seven songs of National Trust prove to be stubborn ear-worms. The EP’s opener ‘Beach Body’, remains the most rambunctious; with a cantering chorus reminiscent of The Fall if Mark E Smith and group had more of a spring in their step. ‘Harold’ sees guitarist Dan take to the fore, a jagged tale of night terrors with a vocal performance evoking his admired Country Teasers. Whirling, jangly riffs counter the grim caution of ‘Dogs Die in Hot Cars’ and herein lies Blanketman’s strength; themes of class, anxiety and dissatisfaction are buoyed by optimistic melodies and droll satire. We caught up with Adam to discuss all things National Trust.

Historically the North of England – and Manchester particularly – has produced some amazing bands, whereas, in recent years independent music has become quite London-focused, are you instinctively trying to counter this?

A: It’s one of those tropes that gets put on you when you’re a Northern band but ‘Leave the South’ was more a personal story than a generalised commentary on the North/South divide. Since moving to Manchester four years ago there’s suddenly a lot of cool stuff coming out; with bands like The Orielles and Document, with The Lounge Society and Working Mens Club not too far away.

I think Manchester particularly suffers from that “it’s not good as it used to be” hindsight, a lot of people are automatically quite damming of the up-and-coming music scene saying that “it’s not as good as the 80’s and 90’s” but they obviously just aren’t going to enough gigs!

Events of the last year has made things quite back-to-front for emerging bands – usually finding your feet and audiences with gigging instead of online activity- how have you found this digital transference?

It’s been hard, we’ve always put the emphasis on our live shows and we’ve never been particularly good at social media. I find it quite depressing and I’m the most proactive out of the whole band! We don’t have any natural content from gigs and don’t want to post things for the sake of it. At least we’ve had music to release which has pulled us through; the music industry at the moment moves so quickly that if you’re not doing something fairly frequently it’s easy to get lost.

Your EP ‘National Trust’ is out this week – what’s it been like recording and putting out a body of work in a locked-down year?

Apart from ‘Beach Body’ (which we’ve been playing for a long time), the other 6 tracks were all written over the first lockdown. Usually, Luke Smith (producer) would come to Manchester and spend time with the band, but instead, all of the pre-production was done over a drop-box document! We recorded everything on our phones and send it to Luke, who did such a good job of steering the EP under those horrible circumstances; things you can say quickly face to face would take a week to get diluted through various chats.

We recorded the EP over a weekend in London and tracked it all live. You can really tell the difference; it was important to record that energy and urgency you get live. The most frustrating thing is not being able to promote the EP, we were hoping we could tour off the back of it. We’ve got 12” coming out but they won’t be ready until July, by then hopefully we’ll be able to play live.

At the time, did anything you were reading or watching or listening to (aside from ‘Hips Don’t Lie’) inform or influence the EP particularly?

(Laughs) I did that as a joke, did you stumble across it!? In terms of influences, at the time I was going through a big Velvet Underground and Modern Lovers phase; I think I ended up channelling the unashamed pop-ness of them. Most of my inspiration comes from personal stories of the day-to-day. I love Half-man Half-biscuit: they’re the best at it; making everyday things so ridiculous and grand!

‘National Trust’ for example, it was my partner’s birthday and her parents bought her a National Trust membership; there’s a proper Half-man Half-biscuit line in there! I think a lot of my songs start off as jokes and I see how far I can take them.

Do you have a stand out song from the EP?

I think the band’s favourite is a song called ‘Harold.’ Dan wrote and sang it; he’s an amazing songwriter. It was the first time he’d sang on a track and I think he surprised everyone (and himself!) he got it done in his first take! That song really sums us up as a band.I really like ‘Blue Funk’ too, it’s very inwardly-facing with personal lyrics but it has a great rhythm section and a big bombastic chorus!

Now that your debut EP is out of your system, what can we expect next?

It’s such a strange thing; you hit the nail on the head mentioning the way in which lockdown has changed everyone’s timelines. The EP is nearly a year old and we haven’t played the songs to anyone. We’ve already written about 2 albums worth of new ones!

Hopefully, we’ll be looking towards a debut album next. We have a new member – a synth player – which has been really great. Mostly we’ve just been writing; we cycle down to our studio in convoy! The toughest thing is Dan is in Reading and he’s such a fundamental force within the band. His guitar style is so unique; we’re all quite tentatively putting songs together waiting for him to come and tear them to shreds! (National Trust is available to pre-order HERE)

Brought to you by Underground – the brand of the Original Allgender Creeper shoe and other British subculture styles.
.