The dynamic dance of REGRESSIVE LEFT 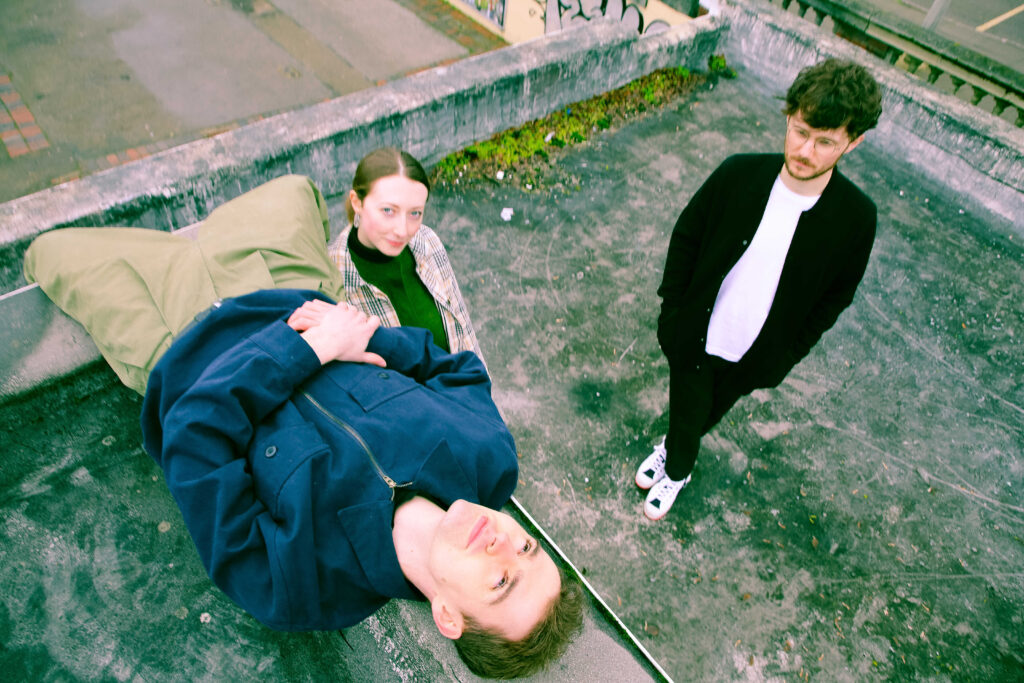 Released just over a week ago, ‘Take the Hit’ is over before it’s begun. A sonic collision sounding like ESG at their most unsettling and Talking Heads at their most cavorting, Regressive Left’s second release unfurls at a dizzying pace. Agitated electronic chatter, “Does blood run thicker than an IV drip?” questions singer Simon Tyrie in a baritone observation of neoliberalism and greed, but the song isn’t weighed down with lyrical severity. One chorus of ghostly vocals from drummer Georgia Hardy and a frustrated guitar solo from Will Crosby and the abrupt hit has been taken. With a reception as instantaneous as the song itself, and half an album written and recorded, Regressive Left have come a long way since the trio met playing in teenage bands in Bedford.

I’m assuming your name is a reference to Regressive Liberals? Rather than a bias towards left-handers…

Will: I’m the resident left-handed person and I don’t think it’s a slur against me!

Simon: I can’t remember why we chose the name; it was a joke. It’s been a while since ‘Regressive Left’ has been used as a slur. It was coined by a man who went from being a radical Islamist to being a potential Lib-Dem MP.

W: I instantly liked the idea of reclaiming the name and that people would eventually search through google for left-wing slurs but would just find our music!

Both of your releases so far have had politically pertinent lyrics. As a band do you think you have a duty to be a spokesperson on current affairs?

S: It’s more that politics takes up a large amount of my head space, for better or for worse. Maybe 5 years ago I wouldn’t have been so politically active in a musical sense but everyone’s so tuned in now, it’s invaded our personal lives. Right now, I don’t know what else I can write about.

You sing about rather bleak subjects on songs that are very upbeat – is this a purposeful subversion?

S: I wanted to have a criteria that every song we write will be danceable!

Georgia: It’s just a reflection of what we listen to. We all have very differing music tastes but something we have in common is dance music.

S: We’ve all spent the last couple of years DJing so we were very conscious of not writing a song that would kill the vibe…at least until we are big enough to get away with it!

W: I’ve tried to make floor-clearers work but it hasn’t happened yet!

‘Take the Hit’ has been incredibly well received, what was the process of making the song?

W: The nucleus of the song was probably the last thing that we had lockdown; it went through so many versions. We had a 5-and-a-half-minute version of that song that I was pretty wedded to but got talked out of it…

G: Now it’s less than 3! We deliberately wanted something short and intense. Simon initially produced the electronics; we were at home so we could sit on the tracks longer and approach it from different angles.

W: The songs are really dynamic and end up in an unexpected place! We were used to writing with the limitations of what you can practically play in a rehearsal room, without the tweaking and layering we could do now.

S: ‘Take the Hit’ became very busy sonically. Originally, I was trying to do a ‘Tainted Love’ vibe with the electronic drums but we added a percussive loop of “market sounds” which adds a lot to the rhythms.

W: We packed 5 minutes into 2 and a half and it’s all still there!

Georgia – you run Spilt Milk – do you think this has offered the band a more widened and realistic look at the music industry?

G: I got into promoting when I was about 17 in Luton, there wasn’t many places to play so I started putting on gigs to give my own bands a chance to play! And it evolved from there; I love being immersed in the culture of music. We all care a lot about everything around the music and because I have my foot in the industry, I know the people we want to work with. We want the whole team to reflect our ethos, if I hadn’t had the experience then I wouldn’t know the politics to that side of things.

Has the decision to move to Stevenage shaped your music and outlook?

S: We record in this out-house outside Stevenage which has been our base over lockdown. It was a good move getting out of London, you can’t really live a liveable life there without being minted. We had the worst experiences of renting, one of the places we lived in the roof fell in! It was around the same time that David Bowie died; it was the most depressing week ever.

Your debut live show was at the Sebright Arms in 2019, for your second gig you’re headlining The Windmill, that’s quite an assent! What can we expect from the live show?

G: We played a one-off gig to see what it was like to play in a live setting, it was a trial show. We want the show to be as fun and energetic and danceable as possible!

W: Because we have backgrounds of being DJs, the set won’t be song-break-song but a whole continuous thing.

S: I want to be able to beat match the set list!