THE FILTH AND THE FURY – SCREENING AT ICA 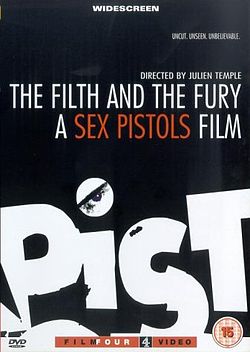 Part of Britain on Film and presented by Doc’n Roll Film Festival as part of Sounds of London, the ICA is screening The Filth and The Fury this evening. The second movie made by Julien Temple about the Sex Pistols (the first being The Great Rock and Roll Swindle) it tracks the rise and fall of the Pistols from 76 to 78.

The infamous TV interview on ITV when Bill Grundy engaged the Sex Pistols was reported in the Daily Mirror the following day with the deadline “the filth and the fury “after the interview had descended into chaos and profanity-words that were never heard before on mainstream TV!

The movie itself provides a platform for the band to tell their side of the story as the band grows from humble suburban beginnings to relatively short lived fame and eventual disintegration. That short lived time at “the top” was nothing in comparison to the real fame that the band gained in the years that have followed marking them as one of the most influential bands of all time

The screening will be followed by a Q and A session with Julien Temple and chaired by artist and journalist Caroline Coon.