THE HORROR SHOW : A TWISTED TALE OF MODERN BRITAIN AT SOMERSET HOUSE 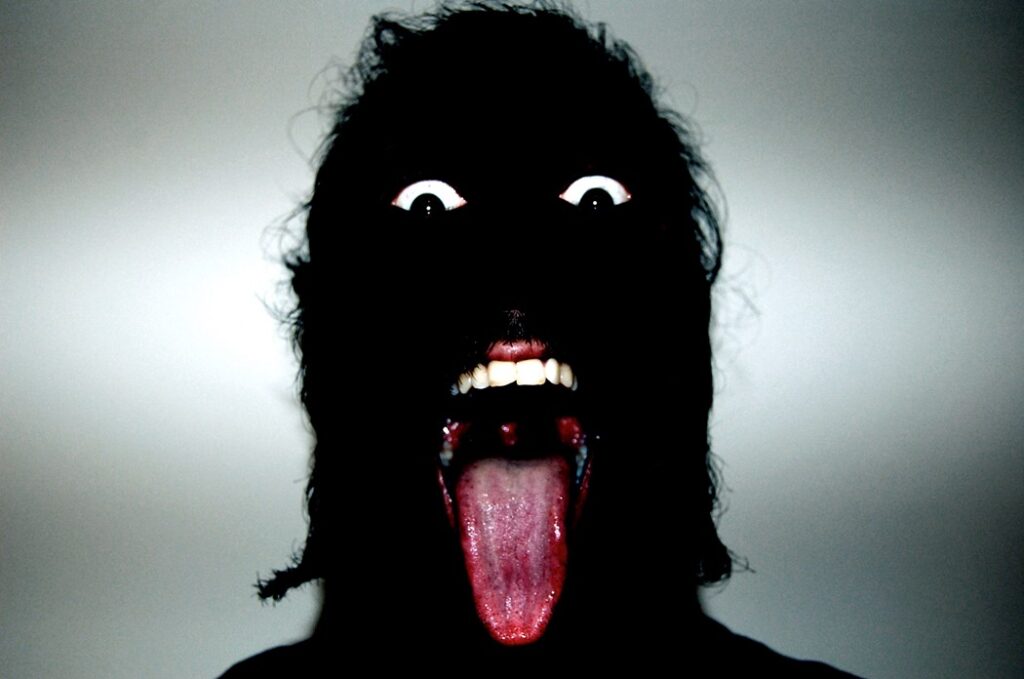 A new exhibition at Somerset House exposes what a little island of horrors we really are. From the camp, the uncanny, the macabre, to the just down right disturbing, The Horror Show: A Twisted Tale of Modern Britain explores how the language of horror has impacted British culture over the last half century, getting its (fanged) teeth of influence into everything from fine art, film, music and youth culture. More, how the tropes and themes of horror as a genre – the supernatural, folk tales, witches, ghosts and demons – have been galvanised by British creatives and tastemakers as a metaphor to express the very real horrors, and existential dread, of their contemporary realities.

Co-curated by artists Ian Forsyth and Jane Pollard, together with Somerset House’s Claire Catterall, the expansive and sprawling exhibit features over 200 artworks, costumes and kunstkammer curios. It is split into three sections – Monster, Ghost and Witch. 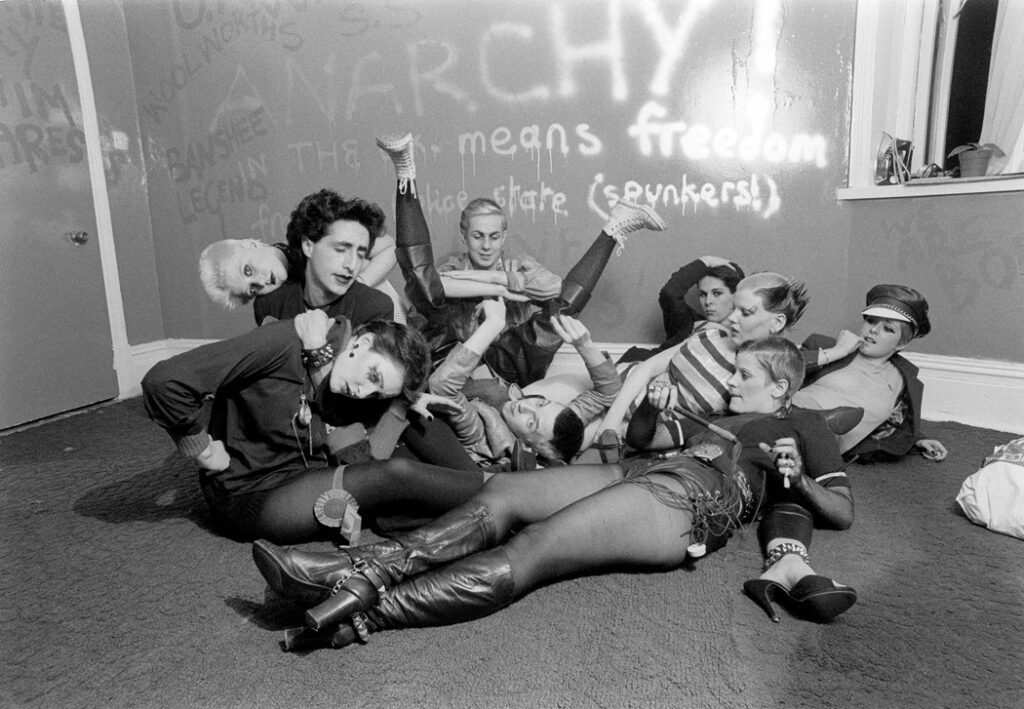 The Horror Show begins with “Monster”, its grimm vision of Britain in the 1970s, a time in which the Victorian overhang of morals and censorship had been transgressed in the previous decade, but the peace and love promises of the counterculture seemed like a distant fairy tale. Illusions of revolution shattered, coupled with mass unemployment, rising inflation, electricity blackouts and the tangible threat of apocalyptic nuclear destruction, courtesy of the Cold War.

As you enter the exhibition, goth rock classic Bela Lugosi’s Dead by Bauhaus plays; its droning, dreary dub pitching the mood for this sections delve into how youth culture subverted the traditional aesthetics and motifs of horror in their style and dress to not only horrify their parents, but perform their collective horror at the world around them. The striking image of female punk icon Jordan Mooney, shop girl in Vivienne Westwood’s boutique SEX and star of Derek Jarmans Jublilee, with her mondrian makeup, platinum beehive and penchant for latex subverting the image of the glamazon pin-up and in turn, the male gaze. The album artwork of David Bowie’s 1974 album Diamond Dogs portraying him as a glam rock version of a man/beast hybrid from greek myth, shock of orange mullet on one end, dogs backside and paws on the other. The albums hit track Rebel Rebel, with it’s opening lines “You’ve got your mother in a whirl / She’s not sure if your a boy are a girl” seem fitting next to all the Hammer Horror-esque camp and kitsch of The Rocky Horror Picture Show memorabilia, reminding us that for a certain chunk of conservative society, a boy in lipstick is far more horrifying than any ghost or ghoul. 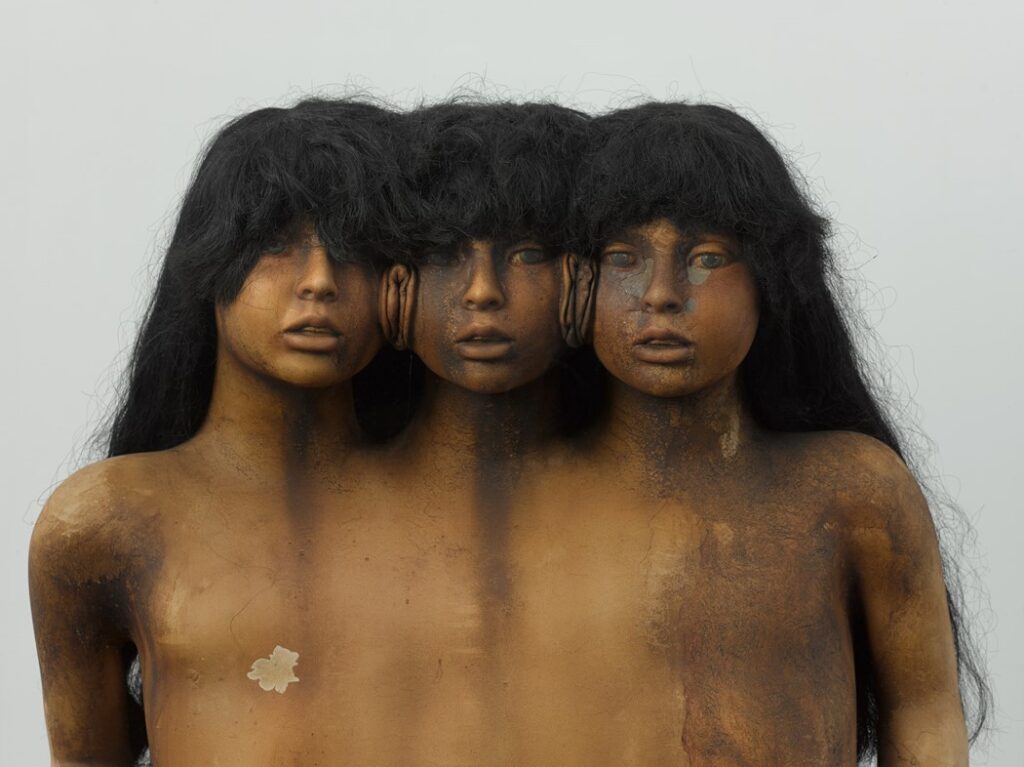 The continuing into the 1980s is signalled by a large effigy of Magaret Thatcher, her carnival caricature likeness created for the satirical politico-comedy TV show, Spitting Image. It’s also a time when youth culture shifted from the spit and sawdust nihilism of punk to the performative glamour and romanticism of goth and Blitz Kid styling, captured in the blown up, flashing club portraits of Derek Ridgers. There’s a costume once worn by provocative performance artist/club kid royalty Leigh Bowery on a suitably voluptuous mannequin, next to it a sculptural wearable art piece by 2000s enfant terrible designer Gareth Pugh, drumming home the former’s influence on the latter. 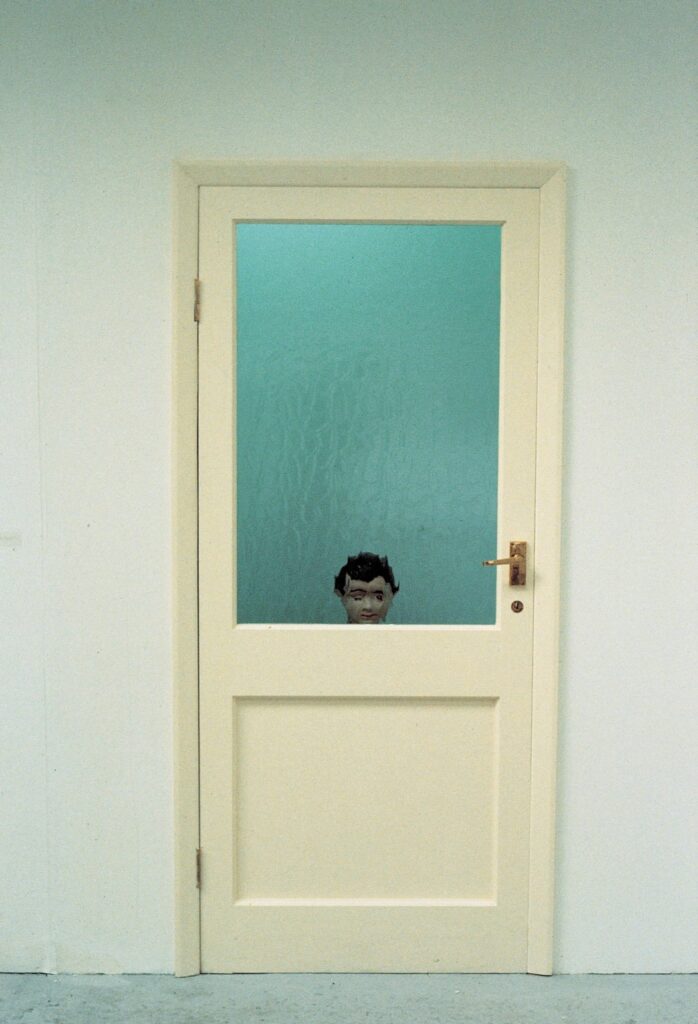 “Ghost” examines the 1990s and immediate post-millenium; a time of increasing surveillance, the Blarite War on Terror and the rise of the internet. Gone were the outre and projected expressions of horror of the last two decades, instead replaced by inner horrors of existential angst, paranoia and a questioning of what it meant to be human in a world that was increasingly driven by technology.

Electronic music, once the genre made for clubs, raves and collective joy is now introspective, dark and experimental, epitomised by the glitchy avante garde beats of Aphex Twin. A new type of conceptual art emerged that was sardonic and unashamedly, unflinchingly self absorbed, the loosely defined group known as the YBA’s (or Young British Artists). Lucy Gunnings film Climbing Around My Room (1993) is genuinely nail biting to watch, as she climbs around the bannisters and doorframes, nearly slipping frequently. It’s the cruel anticipation of her falling that keeps us spurring to watch, evocative of the Orwellian human-suffering-as-entertainment of reality television. Jeremy Millers’ Self Portrait as a Drowned Man (2011) makes us ponder the psychology of the artist more than the actual art itself – what’s the frame of mind of a man that would model himself as a corpse, particularly one that has died in such a horrific way? It’s also an era in which art reflected the tide of millennium induced nostalgia, and martyred the cultural icons of the pre-internet era, as seen in Gavin Turk’s spectral portrait of Sid Vicious Ghost Pop (2012) and Graham Dolphins Door, Joy Division Version (2012). 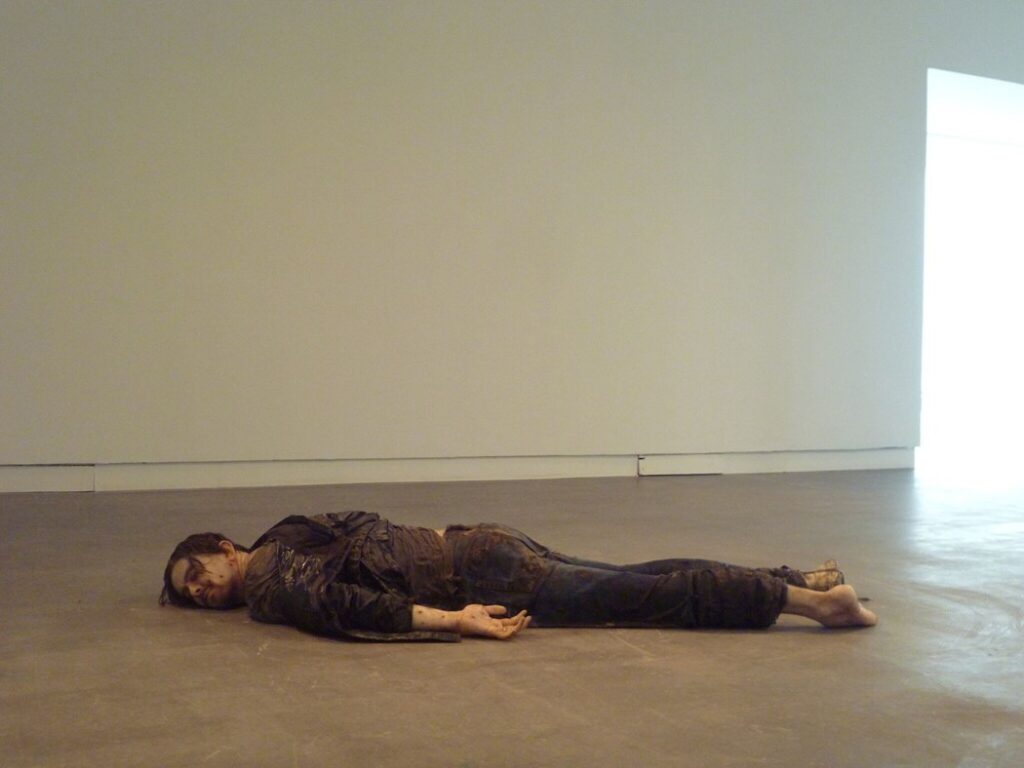 The Horror Show’s final saga, “Witch”, explores the renaissance of alternative spirituality in the post-digital, post post-modern age, and how the practices and motifs of witchcraft and occultism have been reclaimed as a form of defiance, particularly for women, queer people and minority groups. The iconography of the witch being a prominent metaphor for historical female persecution has meant that the witch and the motifs of witchcraft have a history of being reclaimed by feminists dating back to as early as the first wave, suffrage movements in the late 19th century.

In an increasingly chaotic and divided world, the ancient practices of tarot, spells and astrology not only provide a feeling of permanence but also a mode of exerting autonomy and an identity outside of these oppressive structures. More, in the face of impending climate disaster, a mode of being that feels more connected to the natural world. 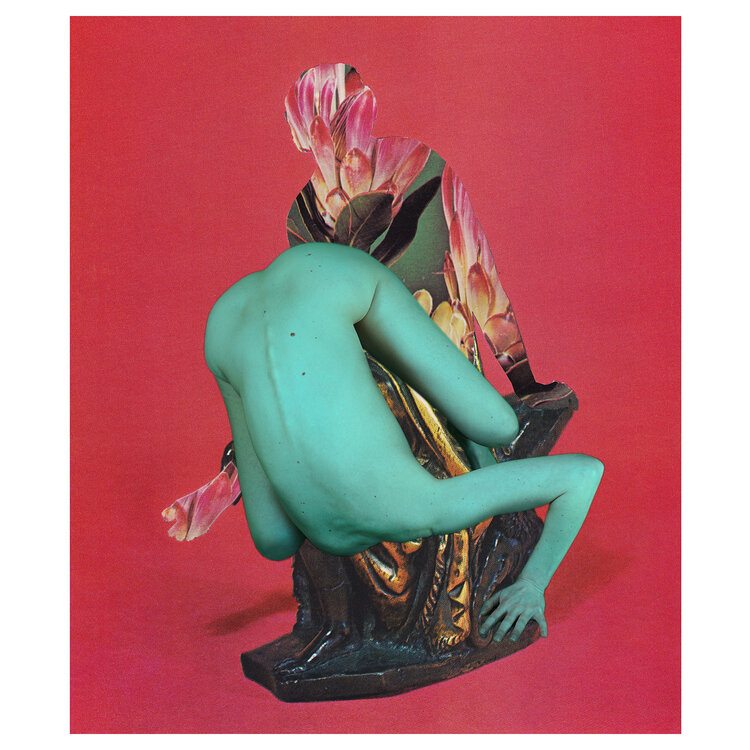 The Horror Show: A Twisted Tale of Modern Britain is on at Somerset House until 19th February 2023.

All images sourced from the exhibition programme.