THE LOUNGE SOCIETY on their virulent debut E.P. 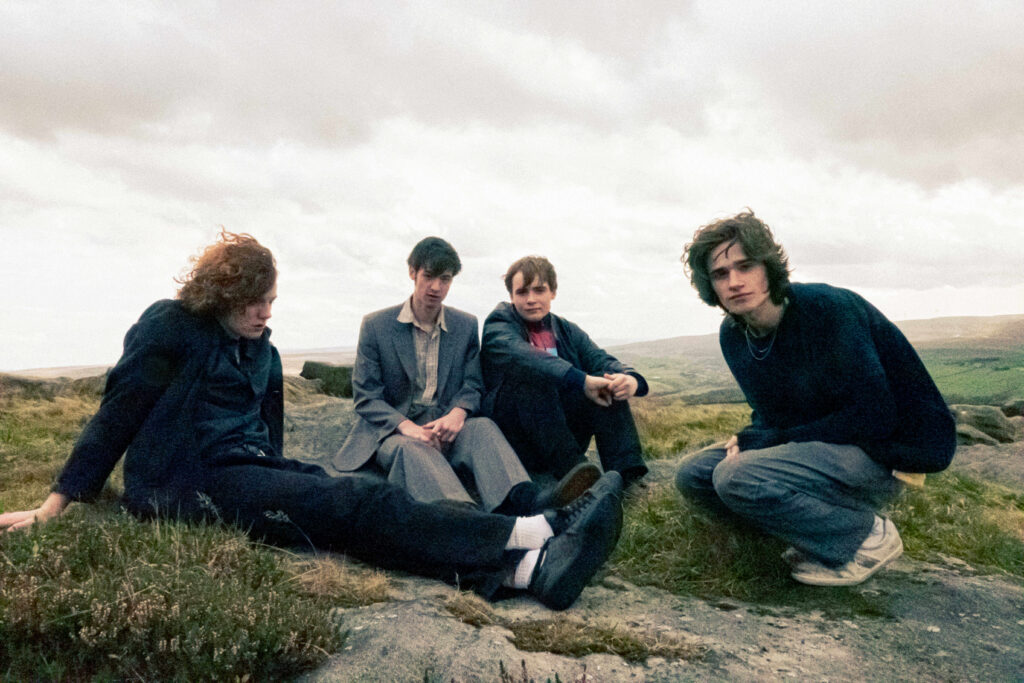 Brimming over with vitriol, The Lounge Society’s debut EP, is as insurgent and agitated and its title, ‘Silk for the Starving’, suggests. Having met in the classrooms of the Calder Valley (this corner of Yorkshire seems to be a crucible for creativity of late, being home to Working Men’s Club and The Orielles), The Lounge Society followed suit; swiftly outgrowing the realms of GCSE music lessons to spawning Speedy Wunderground’s fastest-selling 7-inch release. Crafting songs of political furore to be played live with biting intensity, this principal EP plummets into an affray of swirling guitars and rural abjection.

Congratulations on ‘Silk for the Starving’ – it’s a phenomenal first EP – what was the process of making the record?

These four songs felt so perfect for the EP, so there wasn’t much to consider. The early groundwork of these songs has been around for ages and they sort of flourished into proper songs just before we went to record. The songs felt like four old friends, and together make for a good snapshot of what we’re about. But it is just a snapshot, there’s so much more to come.

Your A-Levels were messed up by the pandemic, how’d you do in your music technology!?

It was a total, total mess. Education definitely wasn’t a government priority (was it ever?) We started to focus more and more on the band and less and less on everything else over the last year and long may that continue. None of us are entirely sure how we’ve done in our A-Levels but we won’t let it get us down if it’s not the result we were after.

You’re signed to the magnificent Speedy Wunderground, and ‘Generation Game’ went on to be the label’s fastest-selling 7-inch, are you wary of the hype machine swirling around you, as a band that’s still in its infancy?

We let it swirl, it doesn’t affect us much. We work hard and play even harder, so the hype just feels like a by-product of what we put into it. Hype comes and goes, but we’re determined to stick around… a lot of bands get carried off down the hype stream and washed out to sea, unfortunately.

Would you describe the tracks on the EP as “protest” songs? Is that a limiting term?

‘Burn the Heather’ definitely seems to have touched a nerve – at least in so far as the political and environmental comments on the YouTube music video suggest – was that an aim?

It’s always an aim really. We were wryly amused by the uproar that it seemed to cause. We just want each of our songs to open a dialogue, and it certainly did that. People can think what they like, we don’t think we said anything that ought to be too controversial.

The issues you sing about are now very prevalent in the music industry – with streaming, record sales aren’t as lucrative as they once were, and Brexit is likely to complicate overseas touring – how do you see emerging bands navigating swamp?

The industry has been battered and bruised by persistent negligence and malicious politics for a while now, so life for professional musicians is harder than ever.

You hail from the Calder Valley and draw direct influence from your environment – do you think there is a reason behind the surge in new bands from the area, or is it more the rest of the UK being slow to catch on?

We don’t know, truthfully. It might be the great venues that we have, places like The Trades Club and Golden Lion are real hotspots of creativity. It could be the fact that there’s not a whole lot else to do, so people spend their time making music – it could be total coincidence. Whatever the reason is for The Calder Valley being such a home for independent music, long may it continue.

You’ve got some shows lined up – what can we expect from a Lounge Society gig?

How do you go about curing Valley Bottom Fever?

Four words: pick up a guitar.

What’s next for The Lounge Society?

We’re eager to get back to gigging as soon as possible and take our music to new places. None of the records have been played live since their release, so they’ll truly start coming to life when they hit the road. There’ll be new records too, you can be sure of that.