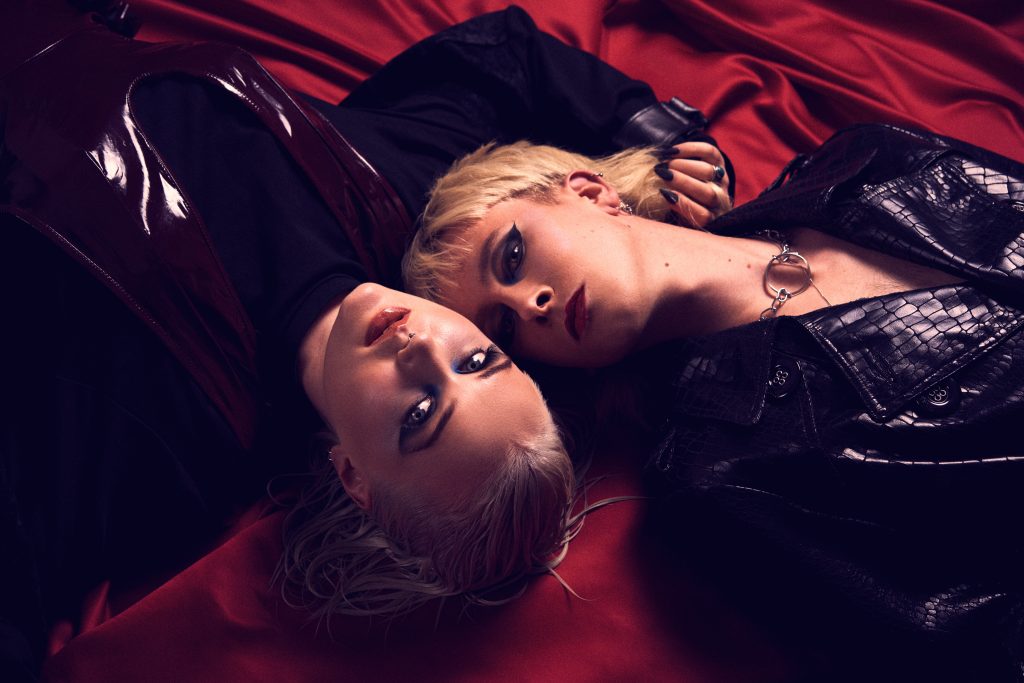 Combining gothic vibes with luscious synths and pop sensibilities, plugging into the soundscape of The Ninth Wave is always an exhilarating ride. The first time we heard The Ninth Wave, we were smitten by the band’s uniquely stylised vocals. Hailing from Glasgow, the noisy post-punk duo consists of childhood friends Haydn Park-Patterson and Amelia Kidd. “Haydn was always intimidatingly talented at a young age and I was a shy wee girl who just admired his talents from afar,” explained Amelia. Growing up acknowledging each other’s musical talent, the two soon joined forces and became The Ninth Wave.

Under the cover of their synth-infused post-punk noise, The Ninth Wave have a penchant for visual design – see how they’ve explored their psychedelic/neopunk aesthetic in their music video of ‘Imitation’. Their beautifully written debut album Infancy also dives into the issues of heartbreak and fragility through incorporating literary imagery and metaphors. Prior to their UK tour, we chatted with The Ninth Wave about the beauty of Glasgow’s post-punk scene, their literature inspiration and their ultimate playlist.

An interview with The Ninth Wave

Describe The Ninth Wave in one sentence.

Misery at its finest.

What are the up- and downside of working as a duo?

A: It’s easier to be open with somebody you trust entirely to get your music and lyrics through. It really inspires you to push yourself and get out your comfort zone, which always creates the best ideas. If you aren’t surrounded by the right people, sometimes it’s easy to close yourself off and be afraid to suggest certain ideas or sing certain lyrics.

But sometimes when you aren’t in the right headspace, it’s easy to fall into the same traps. That’s why we’ve welcomed Kyalo (synths) and Calum (drums/synths) to play live with us, which has allowed us to go down many paths we wouldn’t have been able to with just the two of us. We’re grateful for that.

How would you describe the Glasgow post-punk scene? How does coming from Glasgow influence your music?

A: Glasgow is such a creative and openly diverse surrounding. It’s definitely encouraged to experiment with your sound whilst keeping it full of authenticity and energy. Nobody on this side of the scene wants to sound the same or be compared to each other, which I think is an amazing thing. We all learn from each other and take inspiration from different elements. But you’ll never find one of us going into a studio and straight up copying something from another band. Because the music won’t be genuine anymore, it doesn’t come from a place from within yourself. Having such a strong scene inspires you to be the best you can, a bit of natural competitiveness always helps!

Can you give us an insight into the themes and subject matter that shape your debut album Infancy?

A: Infancy is a brief insight into the human condition. From heartbreak and failure to desire and resilience, how it can shape some but break and deform others. We don’t write songs about things we don’t know about. Everything we do is honest and if that means admitting we were in the wrong, then we’ll write a song acknowledging that. If it angers us about how superficial the world has become, we’ll write a song exactly about that.

Where did the inspiration of the music video ‘Flower into Wounds’ come from?

H: The title of this song was influenced by the opening line of a chapter in J. G. Ballard’s infamous novel ‘Crash’, in which the protagonist discovered his arousal when his body was harmed in car crashes. As the book progresses, his body became more battered and bruised, with him explaining that his body was “flowering into wounds”.

I thought this was a beautiful way to describe something so grotesque and it resonated with myself in a different situation. Put plainly, ‘Flower Into Wounds’ is a song about emotional masochism and finding some sort of enjoyment in having your heart battered and bruised. The video was directed by Amelia’s uncle, Joern Utkilen, who put a surreal interpretation of this into a meditation on suburban living.

What synthesiser(s) are you fond of using currently?

A: My Moog Grandmother is like the first child I will always love. But recently I’ve been losing days upon days to my Elektron Digitakt. Everything is so immediate and there are so many ways you can use it. You can sit down and within minutes you’re halfway through a song you never thought you’d be able to write.

H: Yamaha PS-30 and Yamaha SK10 forever. I write most things on these, and the PS-30 has the best bass sound I’ve ever found.

We’d love to know about any influential albums that have affected your music.

The Twilight Sad – No One Can Ever Know

Marika Hackman – We Slept at Last

A: Post-punk. No question.

A: Hip hop. I really appreciate just how much hip-hop has done for music whether we recognise it or not. It’s inspiration seeps into the best of songs. The creativity and complexity of many of the finest songs are to be admired, even if it’s just the way a song uses a certain sample.