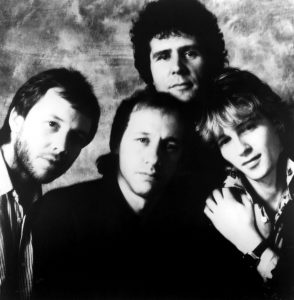 Just forty years after the band formed, it seems fit we revisit Dire Straits as part of our North campaign. The band have been on a bit of a musical rollercoaster to say the least. From starting as slow-burners, to grabbing Grammy awards at their peak; from break-ups to make-ups, from mix-ups to a final break-up, and despite the tumultuous journey, the band has firmly cemented itself in the magically mystical Rock Hall of Fame.

Born in Newcastle, front-man Mark Knopfler has always been no stranger to music: even from his adolescent days, he was a self-confessed Bob Dylan imitator. He claimed himself in 1979 that in true Dylan style he’d be going round to girls houses, drinking seventy-five cups of coffee, smoking ninety cigarettes a day. It’s nice to see that he took on only the most constructive and sensible attributes of the Nobel-Prize winner. Beyond this, during his studies he was a junior rock critic. After playing gigs in pubs, Mark moved into a flat in London with his future band-mates-to-be, and Dire Straits was officially born in 1977.

The band began producing their own demo EP in the same year all for the sum of £130. Energised with the possibility of a professional career, the band took their demo tape to the Soho management company MCA, where it was met with excitement from disc-jockey Charlie Gilett, who picked Sultans of Swing to be played on his aptly named BBC Sunday Radio show Honky Tonk. And so it was written: the Straits had reached their first musical milestone by having their song played on the radio.

In 1978, they produced their first self-titled album, ‘Dire Straits, in which the band acted as melancholic raconteurs from Newcastle. This album arguably set Straits sound: laid-back, un-flamboyant bluesy guitar lines, with authentically lamenting lyrics all sung in sluggish, guttural voice. They instantly became distinguishable from the likes of the seditious Sex Pistols, and the boppin Bee Gees that became the other offerings in the music landscape of the late 1970s.

After the release of their first album, the Talking Heads invited them to play on their tour in 1978. Life imitating art, Bob Dylan saw them perform in Los Angeles, and asked Mark and Pick to play on his next album Slow Train Coming. You can only imagine the nostalgic excitement that Mark felt when his childhood hero asked him to collaborate with him.

Over the next few years, they released a string of albums. However, during the production of Making Movies in 1980, David left the band over creative differences. Nevertheless, the band soldiered on and gained new members, and then went on to release Brothers in Arms in 1985. The album debuted at number one, subsequently stayed there for ten weeks, and became the eighth best-selling album in UK chart history, nuzzled nicely in between ‘Dark Side of the Moon’ and ‘Bad’. They even hold the accolade for having the first album released on CD to reach one million sales. ‘Money For Nothing’ from the album became the first video to be played on MTV in Britain. It’s safe to say, milestone achievements are commonplace in their repertoire.

The band went into hiatus in 1987, yet reformed in 1988 to perform at Nelson Mandela’s 70th Birthday Concert. In true rock and roll style, the band played at the concert despite the fact that their records were banned in South Africa, which was due to the fact that royalties had been given from the band to the charity Amnesty International. What a massive middle-finger to censorship.

After the success of Brothers in Arms, in 1991, On Every Street was released, but was met with moderate success and listless reviews: Rolling Stone magazine branded the album a mere exercise in style, turning tastefulness into tedium. The ensuing tour in 1993 fell flat on its face and the band had ceased to exist in the arena of hype. With Brother in Arms was marked as a fluke, and the band finally met their ends in 1995.

Whilst the band have since been featured on numerous Hollywood film soundtracks, and have won numerous music awards with best-selling albums, the legacy of Dire Straits remains in their spirit that goes against the grain: they challenged the pop status-quo; they just wanted to create authentic music. This is most prominently displayed in their hit song ‘Sultans of Swing’ that revelled in the hopelessness of the industry, since, there’s competition in other places, and wished to put importance back into the integrity of music again. They forgot about rock arena guitar riffs, about censorship, and about financial constraints, and produced thoughtful, poetic, off-the-main-street music that stands the test of time. Knopfler stated in 1979 that you should just do what the hell you really want to do with music, and that’s exactly what they did.