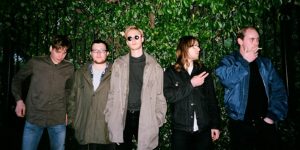 Unapologetic, unafraid and fairly unpleasant: Eagulls are our next band of focus for the North campaign. The band consists of five fed-up boys from Leeds: George Mitchell, Mark Goldsworthy, Henry Ryddel, Liam Matthews and Tom Kelly. In their sleazy guitar reverberations, gloom-and-doom lyrics, and wailing vocals, the band gives a firm wink and nudge to the northern angst of the eighties. You might catch yourself doing a double-take (or listen) when you hear one of their songs, for the Eagulls seem like the perfect summation of the melancholic and morose musings of the Cure, Joy Division and Echo and the Bunnymen.

Formed in 2010, the Eagulls released their first single ‘Council Flat Blues’: a screechy, heavy number that does exactly what it says on the tin: it documents the woes of those who live in the depressing council high-rises. There’s vicious imagery of dogs biting babies necks, dead Dalmatians, and acid-tripping neighbours that uncontrollably laugh. The overwhelming imagery is almost too much to bear alongside the music; it becomes a cataclysm of crisis. Over the next few years, the band went on to put out two more EPs before they released their first self-titled for people to drown their sorrows in. The album appears to follow suit of their first single: the ugly world is chewed up and violently spat out in all its glory. The song Tough Luck tells the tale of the effects of thalidomide-induced birth defects: the chorus repetitive and oppressive in its refrain of ‘tough luck’, what’s done is done. Another song titled ‘Opaque’ notes of frontman George’s former colleague who was arrested due to his sexual abuse of girls. No punches are withheld: the band use the phrase you found your prey / you had your way to directly affect the listener.

Fast forward two years, and the band released their second album Ullages. The nod to the past becoming more a fist-bump here: ‘Lemontrees’ sounds uncannily like Echo and the Bunnymen in its stylized guitar reverbs and melodies, and when listening to ‘My Life in Rewind’, it’s hard not to believe that you’re not listening to a bona fide eighties band. Just like their other music, the album has a visceral hopelessness: the lights and sights don’t seem so bright sometimes / without a stab in the dark.

Whilst neither album garnered particularly positive reviews, as it was branded tedious, this did not dishearten the band for their spirit lies not in their prowess and professionalism, but rather in their unapologetic attitude. They throw caution to the wind, and aren’t afraid when the wind throws it back again: in 2013, the band posted two scandalous posts on their blog: one was a tongue-in-cheek, critique of the music industry. After the post drummed up controversy for the band and hence became the focus of many interviews they sensibly decided to replace it with an image of a phallus stuck in somebody’s nether-regions; with hand-drawn eyes on the butt-cheeks for artistic finesse. The other post displays a scanned image of a rather saucy letter they’d found on the floor, written by a woman called Pattsy to her fantastic lover, who is apparently great at cunnilingus. There doesn’t seem much point to the phallic image, or the letter being displayed, but that’s what makes it so great: they’re illogically outrageous. It’s safe to say the Eagulls don’t really give a damn.

The band are constantly seen to be keeping-it-real: they produce music when and where they see fit, not riding on their wave of hype. They favour mates recording studios over the professional ones, and they champion small music venues over glamourous arenas (they have experience in this as they supported Manic Street Preachers in their arena tour). The autobiographical nature of their music – singing about northern working-class life, about money, about heroin addicts, thalidomide victims and sexual predators makes their songs and essence very authentic, visceral and organic. And that’s what music is all about, right?