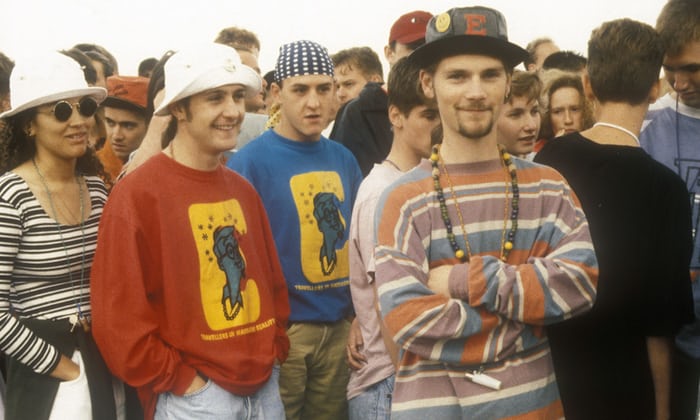 Summer 1988. You’re tripping off your balls on MDMA in some empty aircraft-hanger just off the M60, whilst your mate Steve – with his bucket hat in tow – shuffles endlessly to 808 State after popping an unidentified yellow pill. Long gone were the days of punks and skin-heads, melancholy was uncool: Joy Division were over and baggy flared jeans, tie dye, and dance / new wave bands reigned supreme. Most notably, a small scene began to emerge in Manchester: a cacophony of groove, rock ‘n’ roll, house and sunny psychedelia were what came to define the late eighties and early nineties; otherwise known as ‘Madchester’. This subculture and musical genre consisted of losing your inhibitions; it was an adventure only you (and a pill or two) could take yourself on, creative energy was in excess, and cultural barriers were broken down between races, sexualities, and even football clubs â€“ all in the name of having a good time. Of course, as with any scene, when it obtains a limiting ‘label’, its organic energy ceases. Manchester DJ Dave Haslam suggested that once the Madchester scene had become a ‘thing’, it kind of became about white boy indie bands, which made it more boring than it actually was.

What is to be said, however, is that subcultures are not static: they are produced from a whole host of influences, and once they’ve baked their cake, decorated it, and eaten it, the act becomes the influencers themselves. One of the most prominent features of ‘Madchester’ music was its deep roots in alternative rock, psychedelia, blues and sixties garage rock. Tying all of them together are a variety of iconic guitar styles: ranging from furiously funky to bending-ly bluesy. So, we have chosen four songs: something old, something new, something borrowed and something blue in order to show the ancestors, the kings and the children of the Madchester guitar legacy.

The Smiths, ‘How Soon is Now?’

Whilst arguably not a ‘true’ Madchester song, for it came just too early, The Smiths are still a band that formed in the city. ‘How Soon Is Now?’, with its thunderous iconic guitar opening, undoubtedly informed the other notable Madchester melodies. Although it is not confirmed, it has been rumoured that Johnny Marr produced the guitar riff through a number of techniques, such as a putting the guitar on the floor and dropping a knife on the open strings. Somewhat toe-curling to any devoted guitar guardians out there. Johnny revealed to Rolling Stone magazine that he wished to create a song that had a memorable riff, saying that he wanted an introduction that was almost as potent as ‘Layla’ [by Derek &amp; the Dominos]. When it plays in a club or a pub, everyone knows what it is. I think it’s safe to say they definitely achieved that; the song’s tremendous and recognisable opening riff will shake and rattle any listener to their core.

In terms of the subculture, the now-quintessential Madchester song, The Stone Roses ‘Fools Gold’, was one of the new and early songs on the scene. Inspired by James Brown’s ‘Funky Drummer’, the song was complete with wild wah-wah effects, a bluesy, groovy guitar rhythm – seemingly enthused by the sounds of Jimi Hendrix and Led Zeppelin – that became the perfect recipe for one of the most catchy tunes. Originally the song was to be a B-side to their single ‘What the World Is Waiting For’, yet their record label saw the pop potential and pressured them into flipping the coin and making Fools Gold the title-track . With Madchester now firmly on the map, it’s safe to say they probably never looked back.

Yet another iconic Madchester song, the Happy Mondays ‘Step On’ was actually a cover of a 1971 song by John Kongos called ‘He’s Gonna Step On You Again’. Whilst it’s almost impossible to imagine the song not being sung or played by the boisterous Mancunian boys, the original is incredibly quintessential in its own right: it relies on gritty blues and country guitars that definitely matched the rocking groove of the late sixties and early seventies. It sounds almost like the beautiful love child of Fleetwood Mac’s ‘The Chain’ and Steely Dan’s ‘Reelin in the Years’. The Happy Mondays reworked the song with two distinct guitar sounds: one was incessantly groovy, tight and refined. The other, was groaningly grungy: like a dark, electronic cloud that looms over the listener creating a cover that sounded, well, like the manic and ecclectic city in its entirety.

Inspiral Carpets ‘This It How It Feels’

Like a second-cousin twice removed and then invited to a family wedding, Inspiral Carpets were simultaneously ‘in’ and ‘out’ of the Madchester zeitgeist: they did not reach the same popularity of their uncles the Stone Roses and Happy Mondays, but they seemed less concerned about making Madchester ‘pop’ music, but rather wished to create more thoughtful, and morose songs. ‘This Is How It Feels’ noticeably lacks in the classic bluesy, psychedelic guitars, but there is a lot to be said about their string subtlety. ‘This is how it feels to be lonely / This is how it feels to be small / This is how it feels when your word means nothing at all’ wails front-man Tom Hingley over an understated, but shrewd strumming of a guitar, forcing the listener to become more contemplative and meticulous when listening to the music; each guitar twang has to be conscientiously picked up by the listener. It seems the band’s more minimal music paved the way for the grungey strums that featured heavily in the nineties with bands such as Sixpence None the Reacher, Soundgarden and the Corrs.