The North – The Human League 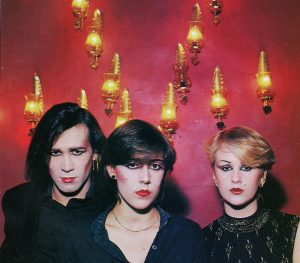 THE NORTH- The Human League

The combination of today marking the 55th birthday of Joanne Catherall and our on-going campaign celebrating the north seemed like the perfect excuse to consider The Human League for our core. The British synthpop band achieved staggering success across the length of their career, and the tale of how their triumph emerged is really one of those unglamorous, yet remarkable tales of fate and providence.

The original formation of The Human League was created in 1977, Sheffield. In itself surprising- The Human League were ultimately one of the most fashionable and progressive bands in the world in their heyday (no offence Sheffield). More surprisingly- differing to the band as we now know it to be- it was originally an all-male electro troupe. Computer operators and former school friends Martyn Ware and Ian Marsh invited Sheffield’s flamboyant introvert Paul Oakey, decked in jewels, heels and makeup to experiment with their synth machines in an abandoned cutlery warehouse. In a time where the punk of the Clash and Sex Pistols was the genre of choice for the city, their androgynous, clean and electronic venture was astonishing. Heck, John Lydon branded them trendy hippies, though Bowie labelled them the future of pop music. Yet the tale of how this version of the band never came to be is surely the dream fantasised by most teenage girls at one stage or another.

As you’d probably suppose from an all-male synthpop troupe from Sheffield in the early eighties- tensions over the next move with their sound and dynamic got the better of them. The originally line-up disagreeably disbanded- Wikipedia cites that the lack of success compared with the success of Gary Numan’s work at that time brought matters to a head amusingly. One half moved on to form Heaven 17, leaving The Human League composed of solely Phil Oakley. With the entire debt of the band, an imposing Virgin records deal and a mammoth European tour looming two weeks away all to his name- what was he to do? His quest took him to the Crazy Daisy Nightclub of all places, where he caught a glimpse of two young women exuberantly dancing. It was here he knew that these two women would be the perfect addition to The Human League’s two-week tour, and he enlisted them instantly, not knowing whether they could even sing or perform.

You can imagine the young girls excitement- yet young eventually turned out to be an eventual problem. They were 17 and still in school. To Joanne and Susan, they saw a thrilling opportunity to get out of school for a few weeks. To Paul, the reality of the situation sunk in, and he realised he would have to speak to the girl’s parents.

Sadly but fortunately- it was the evaluation that Phil was too effeminate to be a sexual predator that sanctioned the girls to jump aboard the synthpop tour of Europe. If it were not for this out-dated summation of Phil’s androgyny, The Human League as we know it would not have surfaced.

The break from school to tour Europe never ended for Joanne and Susan- the pair along with Phil have remained at the beating heart of the band ever since. They soon released the prolific album Dare, and insatiable hits from ‘Don’t You Want Me’ to ‘Love Action’ have continued to rile up crowds across nightclub dancefloors ever since.