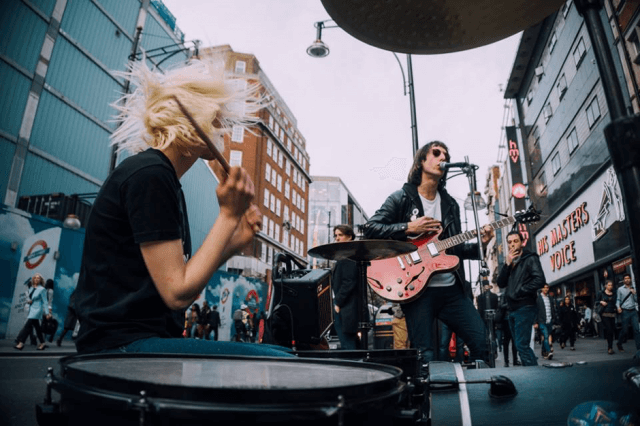 TOMMYANDMARY are professional buskers, based in London. They are smashing the stereotype of buskers playing mellow guitar music. Rock is in the blood. The couple play the type of music that they are passionate about, they don’t give a damn what society thinks of it. They will not conform to the quiet rule in the city. They play loud. Passion is what TOMMYANDMARY are all about. Powerful drums and guitar are combined with clever lyrics to create relatable music that you just can’t get enough of.

Playing rock music live on the busy streets of London is a rather daunting task. We caught up with TOMMYANDMARY. We wanted to know how the busking lifestyle is treating them and what they have been up to. Be sure to catch the duo at a seemingly rare indoor gig at Camden Assembly on March 25th, 2017. They’ve given themselves a whole two months to focus on preparing for this gig so it is one not to miss.

You’ve chosen to continue busking even though you are now established and recording which is intriguing. Why have you chosen to stick with the busking lifestyle?

It is nice of you guys to say that we are an established band, but we feel it is all just the beginning of something much bigger and much more exciting. Yes we have worked with a world renowned producer and drummer Gary Wallis on our latest album Authority and also with Rupert Cobb on the 3 videos at Gun Hill Studios which is the biggest infinity cove studio in Europe, but it does not mean that all of a sudden we started getting attention from record labels, booking agents, radio stations or anything like that. We still busk as we need to grow our fan base, promote our music to as many people out there as possible, make new friends and make ends meet.

Where is your favourite busking spot and why?

Unfortunately, there aren’t that many places where we can go due to the fact that Mary disagrees with an idea of having a stripped down drum kit and that means we are extremely loud and not many businesses or residents out there can cope with that. But over the course of 2 years we have managed to establish a good relationship with some of them and funny enough sometimes a business asks us to perform inside of their shop in order to attract attention from their potential customers. But as it goes, we prefer going to places like Brixton and Hammersmith as the crowd there generally seems to be more into our style of music.

I think usually people expect quite mellow music from buskers- Have you come across any difficulties playing on the streets of London as a rock band?

Yes, we have and I do not personally think this will ever end until the point when we stop busking and only do venue shows. We have been through all sorts of negative experiences when all our equipment got broken by unappreciative passers-by, both of us have been violently attacked by angry residents, drunk people who seek attention and ruin shows and the list goes on. But, in spite of that our passion and the support that we get from our fans keeps us going and we do not want to let that negativity be in our way. 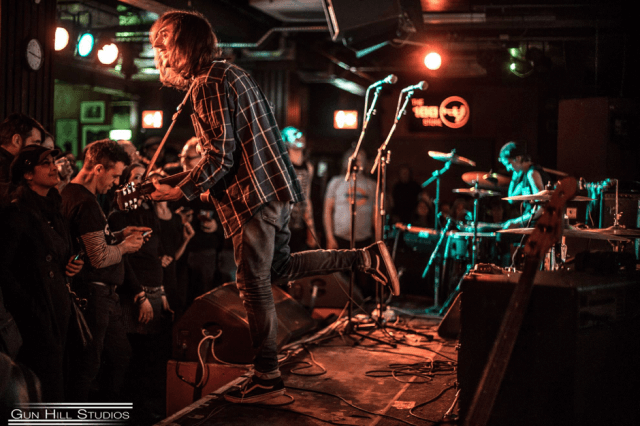 Do you have any plans to take your busking international? What would be your dream city to busk in?

Busking in central London helped us build a strong following worldwide and we keep getting emails from people asking us to do a European tour. So, we are planning to go to Europe hopefully this year to countries like Germany, France and Spain and later on we are planning to organise a visit to the States, Canada and Brazil.

Travelling around one of the world’s busiest cities with a drum kit must be interesting, to say the least. Are there any funny (or not so funny) stories you can share with Soundwave about commuting with your kit?

It is actually quite fun as I stack parts of my kit on top of each other and I have a huge rug in the middle so people generally think we are moving out every time we go out. We always take up a lot of space on a bus/tube but funny enough people seem to have got used to it especially the bus drivers as we managed to make friends with loads of them eventually. 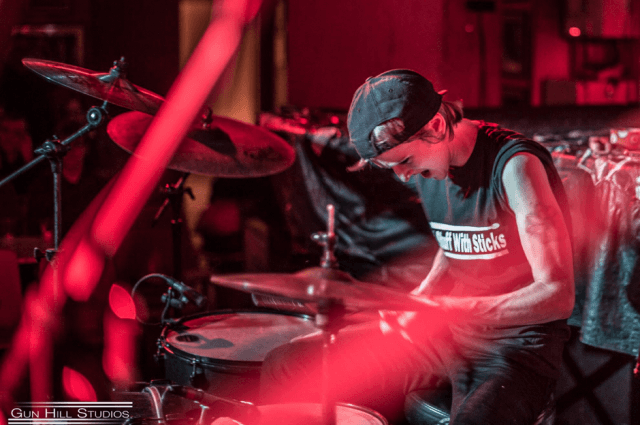 Your gig at Camden Assembly later this month is fast approaching; you’re not playing on the streets for a change. How does the atmosphere differ from playing venues as supposed to playing for people on the street?

Playing in a venue is a totally different experience as people who come to see us do so because they love our music and support our lifestyle as opposed to playing to an unknown audience in the street who might not necessarily be into rock. The sound is much bigger, the atmosphere is full of fun and happiness despite the fact that we are a punk band, the audience is a lot more responsive and the support that we get at venue shows is really overwhelming and that pushes us to do our very best each time we play.

It has been over two years now since you quit your day jobs to peruse a career in music and spend your days playing for people as they explore the city- What advice would you give to budding musicians who are thinking about taking the leap?

We always respond to questions from musicians that want to promote their music through busking as we know how difficult it can be when you first start. The most important thing to remember is try and be yourself, respect your audience and never give up.

You are both very busy people and have already had three music videos out this year! Which of these video was your favourite to film and why?

We are always involved in some sort of video project and filming these three videos was a lot of fun. For the first time we worked in a professional filming studio (Gun Hill Studios) with all the right lights and cameras and most importantly a very experienced team. As we recorded our album live Gary Wallis asked Rupert Cobb to film the whole process and that is how we managed to get the three new videos for our latest tracks. We absolutely love all of them and feel overwhelmed with the support that we got from the team at Gun Hill Studios and Rupert Cobb himself.

Apart from that we have been working really close with an upcoming editor Giorgia Zarantonello on a number of video projects including the one that is already out on our YouTube channel AUTHORITY a music interview that shows some parts of the recording process and the making of the videos. Apart from that she is currently working on another video on one of our latest tracks that made it to the album The rich acting rich for the poor. This will be an unofficial video that was filmed in our house and has all our closest friends rocking out in it so stay tuned! 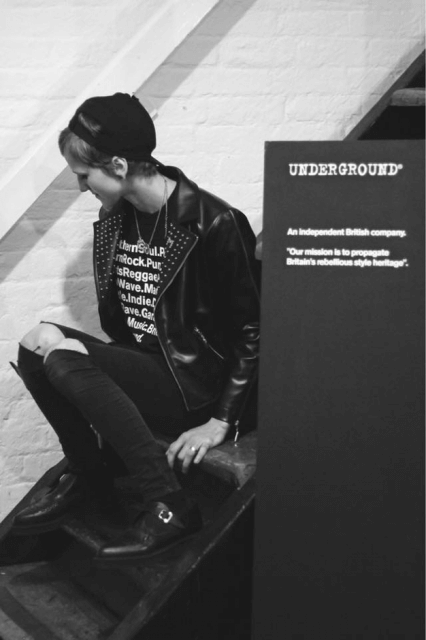 What does the future hold for TOMMYANDMARY? What have you got planned?

We have no idea, no plan B or anything like that. Everything we have achieved so far came through hard work and making new friends. We tend to stay in the moment and see how things work themselves out by not concentrating on what might or might not happen as this tends to put too much pressure on our creativity and performance.

UNDERGROUND inspires and is inspired by British Subculture, both past and present. Which Subculture has had the most influence on you?

I have always been inspired by youthful energy, from the clash to Iggy Pop to some not so famous artists such as The Cigarettes that I’ve only just discovered recently. There seems to be a passion for originality in music and performance in these bands with a reason for creating something personal and fun. I think there is something very special about the way Mick Jagger skips from one side of the stage to the other singing shattered or the way front man Cedric from the band At The Drive In, shares his energy with the crowd. So I think my inspirations have come from trying to find my own soul in the music and reflecting it on stage. But this seems to be a lot more vivid in the mid 70s and early 80s of rock culture for me. 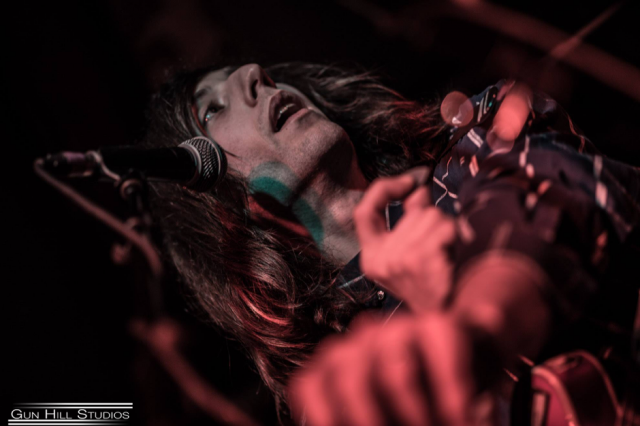