From the Underground Book Collection: Turn The World Dayglo – The Creative Life Of Poly Styrene 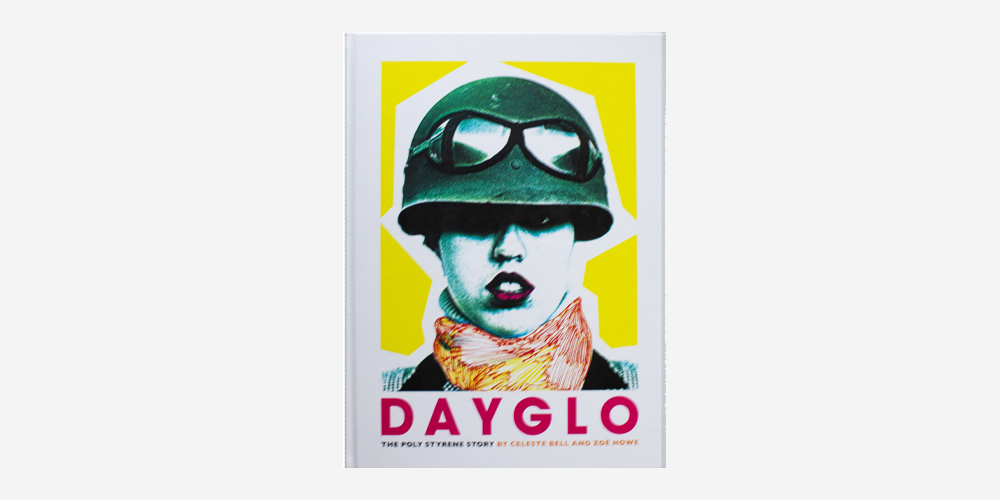 Turn the World Dayglo: The Creative Life of Poly Styrene

“I think her legacy is: ‘Don’t be scared of being different. Embrace it, harness it.’ Poly will be remembered for being the one who opened the doors for so many people who were different and wanted to express themselves.” – Mike Bennett

Underground has always pioneered both women in music, and individuals who don’t want to conform. Poly Styrene (né Marianne Joan Elliott-Said) embodied each of these. At the forefront of the punk rock movement, Styrene was the frontwoman for the punk rock band X-Ray Spex. She was also a singer-songwriter, free-thinker and an artist; reminding others of the notion that punk was more than merely a genre, it was a lifestyle. This idea is further illuminated within Turn the World Dayglo: The Creative Life Of Poly Styrene, which was co-written between Poly Styrene’s daughter Celeste Bell and writer/artist Zoe Howe (who is. known for her other works such as Typical Girls? The Story of the Slits). It is an observant, oral history book with notes from the likes of Vivienne Westwood, Don Letts, Jonathan Ross and The Slits’ Tessa Pollitt, as well as so many others. It pieces together the life of Styrene and the impact she had on punk and as a woman in the music industry.

Despite scrawling in her diary entry in 1977, ‘I am a cliché’, Styrene became anything but that. Cited by Billboard as the most unconventional frontperson in rock history, seconded by Vivienne Westwood, her vision for inciting change began while she was young – quoting the likes of mavericks Andy Warhol and David Bowie in her diary. Presenting Styrene as an enigmatic but flawed human being, this intimately personal account is immediately reflected by a letter from Celeste Bell, to her mother.

From the first chapter, we are given an insight into her childhood and her parents, Osman Mohammed Said and Joan Nora Elliot. The Somalian culture and her roots are also discussed by both experts and family members. The mixture of cultures is eye-opening. For most of her life, Styrene distanced herself from her Somali culture due to her strained relationship with her father. The theme of identity is crucial to this book. As Rhoda Dakah notes, being bi-racial was embraced by punk, as it was a culmination of outsiders. Owning her “half-caste” identity was a challenge for her at the time, and the book delicately albeit shrewdly reflects that.

Furthermore, the book describes Styrene’s experience of growing up in Brixton in the 1960s. Each anecdote reinforces the creativeness of Styrene. Even at school, she’d be sewing bags and making jewellery. The beginning of her battles with manic depression and bipolar disorder at this time are also discussed. Despite her vulnerabilities, she was always standing up for herself, with her occasional brawls with boys at school described, as well as when she was mugged at twenty but fought to retrieve her bag. She was and will be remembered as fearless.

The notion of her always taking control of her own identity is paramount. The book includes her move to London as a teenager to be with filmmaker Falcon Stuart, who was twice her age and became her boyfriend and manager for X-Ray Spex. While in London, she sold jewellery on a market on Kings Road. Her stall was interestingly named ‘X-Ray Spex’ after her aunt sent her some glasses in the post. She was completely different from her monochromatic punks and even polished women who came before her. She was a breath of fresh air in the scene.

The look into her music career also furthers the impression that Styrene always knew what she wanted. Her career began with her wanting to fuse reggae African rock, and to begin a band after having nothing in common with the older session musicians she performed with. X-Ray Spex was founded in the 1976 and they’ll always be known for battle-cry, Oh Bondage, Up Yours. The unravelling of X-Ray Spex is also explained, the reason behind her cancelling tours in ‘79 and finishing the band. It was due to her deteriorating mental health at times and not wanting to do the live shows anymore. Her struggles further humanise her and show the true strength of her character.

Styrene may have begun as the figurehead for punk but she successfully ventured into the realm of pop during her later days, which is best demonstrated by her solo projects Translucent and God’s & Goddesses. And her lyrics always remained ingeniously satiric.

It also covers how Styrene found faith in the Hare Krishna movement. At age 14, she saw a vision of Hare Krishnas, it is still undecided whether it was a hallucination or if she was psychic as she believed. Regardless, this fascination with spirituality stayed with her throughout her life. The book also thoughtfully features Styrene’s favourite recipes from The Hare Krishna Book of Vegetarian Cooking, which is a creative addition.

Turn the World Dayglo contains personal photographs of her, hand-drawn artwork, and flyers from the punk scene. They are all intertwined with powerful lyrics from her X-Ray Spex days. Leaving no stone unturned, it tactfully delves into the mental health issues experienced by Styrene, without diminishing her impact as a creative entity, or as a person. By including a range of people close to her, it creates a personal reflection of every facet of her character. From discussing her music career to her life as a whole, it’s the essential book for both punk lovers and established fans of Styrene.

“Beauty and glamour are still such a big thing. I think about the female artists who have had success in recent years… they all look beautiful, everything is so glamourised, it’s a huge pressure on women. And will anymore remember the music? – Poly Styrene

Buy Turn The World Dayglo: The Creative Life Of Poly Styrene from our online store.