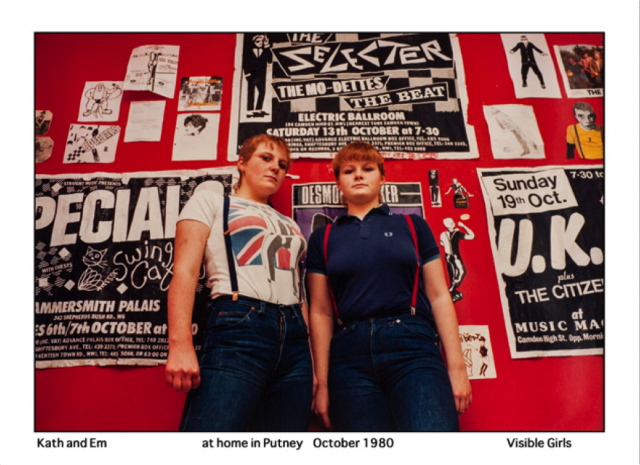 In the 1970’s and 80’s when British sub culture really found its feet there was a constant evolution and cross splintering , which lead to the formation of not just one subculture, but of many different ‘tribes’ of subculture. This included mods, skinheads, punk, psychobilly’s and futurists amongst many.

Photographer Anita Corbin was on hand to capture the fashion of these subcultures during 80’s London, and now contemporary viewers are able to get a glimpse into the styles that emerged at that time. When Corbin was a student, she noticed that women’s fashion had become very distinctive, mostly those who were a part of subcultures and snapped photos of these women, some strangers, some friends, all in an effort to show people how they were expressing their individuality. She focused her photographs on women, and in an introduction to her work in 1981, she said that this is because she felt that “girls in ‘subcultures’ have been largely ignored or when referred to, only as male appendages”.

The photos don’t just display girls making a statement with their clothes; they also present women making a statement about society. The fact that they were involved in subcultures already shows their rebelliousness towards the norm, but the girls were also fighting for women’s rights. Some of the images show girls who were involved in the women’s liberation movement as with the one photo of girls taking part in a march for International Women’s Day in 1981. For these girls, the way they dressed was not without reason, it represented their lifestyle, and that is what exactly these photos help to portray.

Corbin also interviewed the subjects of her photos, asking them questions about everything subculture related, from appearance to women’s rights. Her interest with these photos was re-sparked after seeing that Buzzfeed had used her photos in one of their articles. She then went on a mission to try and find the women who starred in her images. Corbin commented on her search for the photo-girls on the Guardian website saying, “since the advent of social media I have been able to find around 50% of the original Visible Girls – still looking for more though”. She was excited to find that many of them live abroad, from as far as Australia to Spain. Some of the girls even made an appearance at one of Corbin’s exhibitions of the series, giving a real then and now experience to other viewers. It doesn’t stop there though, as Corbin wishes to find each of the girls and take a recent photo of them, to create a new reunion collection. It also motivated her to create ‘First Women’, which is a compilation of photos focused on women who were the ‘first in their field of achievement’, which is set to be a travelling exhibition in 2018.

If any of you are out there, or you know any of the girls ,and this is the first time you have come across Anita’s quest then get in touch with her.

Metro Imaging have collected these photos and arranged them together for an exhibition called ‘Visible Girls’, which is a part of their series of Front of House Exhibitions. It is in its final week until the 27th May 2016 at Metro Imaging-please get down there and take a look