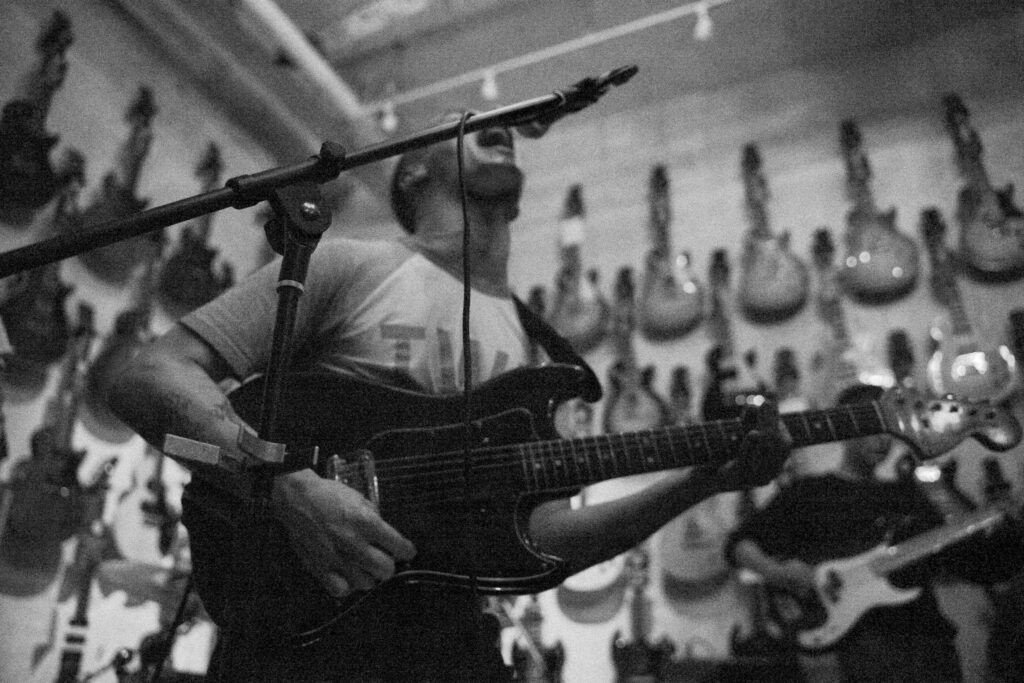 With an upcoming EP ‘Touch the Ground’ set to release in 2022, Talk Show, the London-hailing post-punk inspired quartet, partnered with Underground England and Sixty Sixty Sounds to create a launch party for their latest single ‘Underworld’. With Underground’s roots in music and subculture, and Sixty Sixty Sounds’ rich musical heritage at its Denmark Street location, the pairing was an obvious choice. The guitar shop, which has seen visitors from the likes of Billy Gibbons to Harry Styles, remains at the heart of Britain’s rock and roll history.

Talk Show have gained a cult following, with their gritty vocals, thumping beats, and layered guitars. The band (consisting of Harrison Swann on lead vocals and rhythm guitar, Thomas Holmes on lead guitar, bassist George Sullivan, and drummer Chloë Stacey MacGregor) use their brooding songs to comment on the state of political and social affairs within the UK.

Always one to support the up and coming within music, this evening served as Underground’s first venture into showcasing bands with live sessions and events. Before the night kicked off, the band arrived early to the store, performing soundcheck which previewed just a glimpse of the energy that they would bring to the performance within the following hours. With each member wearing Underground on their feet, it was clear that the evening was going to be enthralling.

Fans bustled outside the shop in deep trepidation of the act which they were about to witness. Tickets to the event were limited and exclusive, giving a handful of fans the opportunity to witness the evening’s events. With the store quickly becoming packed out, it wasn’t soon until the shop held the same atmosphere as some of the country’s leading music venues.

Walking out to a crowd who silent in anticipation, Talk Show weren’t ones to let down: the evening started with the band warming up with ‘Trouble’ with Swann’s violent lyricism paired with an almost militaristic sound of harsh guitar rhythms and drumbeats. It wasn’t long until the whole crowd was jumping, bouncing, and dancing along with the band as they played both deep cuts of old music and selections from their debut EP ‘These People’. Swann’s charmingly boisterous act was something that took first-time listeners by surprise, with the lead singer bringing as much ferocious energy as he would to a full–sized venue to the 50-capacity store.

Despite the heavy and dark nature of the band’s lyricism and soundscape, this was juxtaposed by Swann’s jovial nature when interacting with the crowd, almost basking in the undivided attention that this brought. As the set continued fans were laughing, screaming, cheering, and dancing in pure catharsis. The night wasn’t a one-man-show however, with George, Chloe, and Thomas each bringing the same level of energy to the performance. With Chloe’s frantic drumming, George’s bouncy guitar playing with the penultimate song being ‘Underworld’ the energy of the venue was at its peak, before them ending the set on their most popular release ‘Fast and Loud’, with the audience being in complete awe at the performance that was put on.

Ending with ecstatic cheering and the band’s own complete rapture at their reception, Talk Show stuck around to greet fans and chat to friends and family. Starting in October, the band are set to embark on their biggest UK headline tour to date, with an appearance at London’s 600 capacity venue Lafayette. The next month is going to be staggering for the rising post-punk rockers.