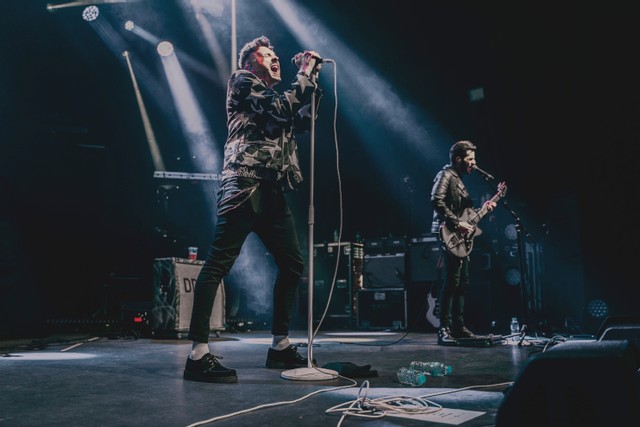 After having returned to releasing music with ‘Happy Place’, the touching anthem written about the passing of their dad, Glasgow’s Saint PHNX have just finished their tour with You Me at Six and have much in store for them. Being over a year and a half since the release of their debut album ‘DDMN’, we chatted to the Glaswegian brothers about signing to their new record label, being back on the road, and the plans for their new material.

It is clear that brotherhood is something that has been a strong part of fueling your music, how and when did you both start to work together – has music been a big part of your lives and relationship since you were young?

We were in a band previously for years and we have worked together in a family business, so we know how it goes! It’s always been a big part of our lives growing up and playing in different bands and now it’s just the two of us. It seems to be working well.

Your parents have both been very supportive of your musical career, without this do you feel like you would still have pursued music and been in the same place as you are today?

We were always told to dream big growing up. It’s been the reason for not giving up when times get hard. We have always been pushed to be the best version of ourselves and we always aim high.

Glasgow has a rich music scene, whether indie, pop or rock, and there are many names that are currently paving their way in music including yourselves –  Has the culture of Scotland been a big influence on your music?

Glasgow is the best place in the world. When you are grinding it out, the city builds your character. So many great bands and artists have come from Glasgow, and it gives us inspiration every day.

After having just rounded up your tour with You Me at Six, how does it feel being back on stage again after such a prolonged period of time?

Literally the best feeling ever! We had such a blast playing these shows and YMAS were incredible.

Whether on your most recent tour, or when first starting out, what has been the biggest standout moment for you both within a specific show or tour?

We toured with Yungblud in the summer of 2019 in the USA. It was the moment we felt like a real band and found exactly who we are playing live. To see our songs connecting with so many people was amazing!

To expand on this what has been the best moment of your musical career so far?

Too many to mention! We are very grateful and lucky to be able to do this as a living. Touring across America with Yungblud and Lewis Capaldi is up there.

For those who haven’t listened to ‘Happy Place’ can you tell us the story behind the song?

It is a tribute to our dad who sadly passed away this year. He was diagnosed with a terminal illness called Pulmonary Fibrosis in 2017. He wanted to fulfil his dream by building a house for our mum so she would have a special place after he passed. In 2020 during lockdown, his condition began to get worse over the course of the year. We were writing a new album and any time we finished a song we would play it to him in his new house. One day, we had finished a new song and went in to play it to him. There he sat in his chair at the window staring out on these beautiful hills, escaping all his worries, and he looked at peace. He was in his “Happy Place” and that’s what inspired the song. We wrote the chorus that night. On Christmas night he was rushed to the hospital, and we knew he was dying.

The song obviously must have been very hard to write when your mind was preoccupied with your dad, can you describe the process of writing the song?

We will only write a song like this one time in our lives. It was very difficult to write. We had the chorus and left the song for a few months. We couldn’t finish it. It was too raw. Our dad was in hospital and facetimed us to ask how the new songs were getting on and if he could hear anything. We couldn’t focus on music as we were so worried about him. He told us that we had to get songs finished if we wanted to get to the next stage of our career. We wrote the verses and Stevie finished laying down the vocals around 6pm, and at 8pm we got a phone call saying we had to come to the hospital to say our last goodbyes to our dad.

Happy Place has been very therapeutic. We never intended to write a song like this but when our dad was dying in hospital it felt right to finish it. We were lucky enough to play it to him the night he died and it’s a memory we will cherish forever.

It is no secret that recently you have signed to Atlantic Records, and it was ‘Happy Place’ that was what led to this – what does this big step mean for the future of the band?

We had spent most of 2020 writing a new album which is a completely different sonic to Happy Place. The day our dad passed away we phoned our managers to tell them the news. We told them about the song and sent it to them. The following week we had an offer from Atlantic Records in America. Our dad has been pulling some strings up there to make this happen! The story is insane, and we can’t believe it has happened this way. When we signed, our A&R Pete Ganbarg said, “I’m so sorry you had to go through something so tragic to create something so beautiful.”

You have a unique way of approaching the production of your music – with your first album being written and released in two halves, is this experimental approach to music something that you still play with?

We like to try and tell our story song by song and piece it together for the audience. It’s something we find interesting and love to do. It’s all about taking the listeners on a journey!

With hints that you are working on new material, can you give an insight into the themes that are being explored within your upcoming music?

New music is coming soon and can’t wait to share it with everyone!

After having just played TRNSMT festival and with your Glasgow gig at Saint Luke’s approaching this November, what is next for Saint PHNX?

We plan on releasing a Christmas song for the first time haha! We will also have a European tour announcement very soon with an E.P. release in January!