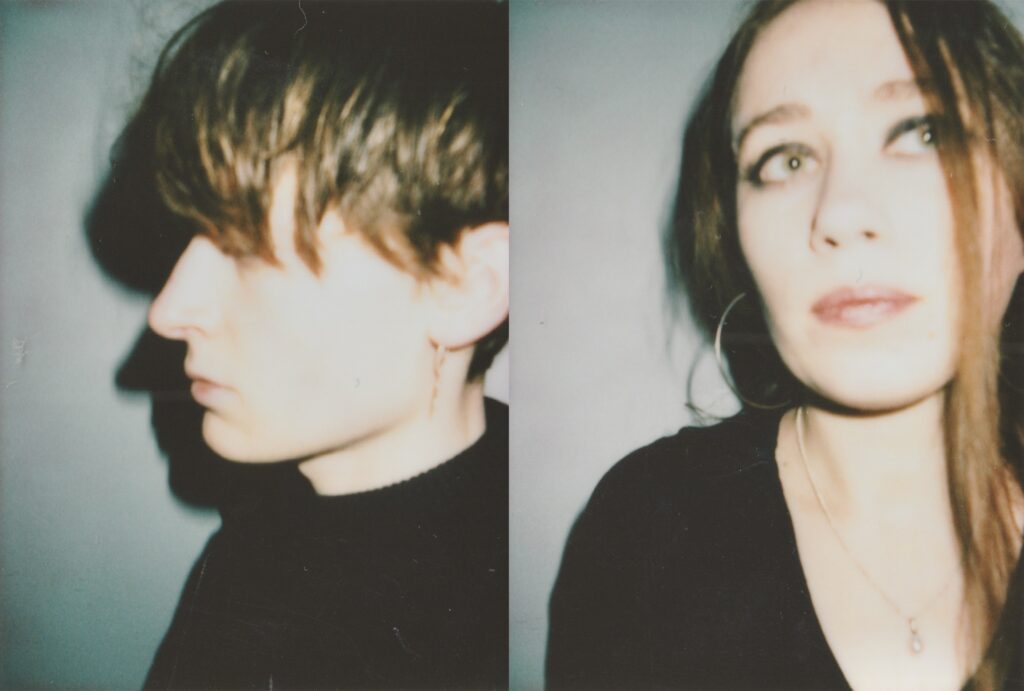 Lilting between the eerie and the ethereal, White Flowers debut is an album for off-kilter dreaming and wandering at dusk. Following their stints as art students, Katie Drew and Joey Cobb returned to Preston, taking the capital’s psych influence with them. Welding cascading loops with petal-delicate vocals, the duo experimented with sonic equipment and visual craft; cultivating a realm of drifting soundscapes and monochrome blooms. Ahead of the release of their debut album, ‘Day by Day’, we caught up with the pair to uncover the processes behind the record.

Despite being quite technology-based, White Flowers seems to be a very organic project borne from experimentation, how do these dichotomies play out within your creative process?

When we first started making music, we had hardly any equipment and little technical knowledge, so we just tried to make the sounds and songs we wanted to make working under quite extreme limitations. This idea of limitation is something we’ve held onto, as it forces us to experiment with what we have. We’ve developed our own way of making sounds, and a lot of it is just with really cheap, basic recording software on a laptop. For us, writing songs is often quite a drawn out, fragmented process relying a lot on intuition and feeling. We like to let ideas unfold in their own time, trying not to force anything. Technology serves as a very useful way to pull all the fragmented ideas together into a coherent whole.

It took two years to pull the debut album together, is a slow, deliberating work ethic vital for you?

This album definitely took a while to come together, but for a few different reasons, one big one being that the pandemic putting the brakes on things for a year. Despite being a slow process though, it’s felt very natural and not forced in any way. We were never in any rush to get our first record out, we were more concerned with developing the songs, the sound and the overall aesthetic to a point where we were happy with it. That said, we’re hoping that future records we make come together more quickly, but you can never plan these things…

Has your environment of Preston (having moved back there after a stint in London) played a role in the album formation?

There’s a feeling of isolation where we’re from. Manchester and Liverpool aren’t far away, and London’s only a two hour train journey away, but when we’re in Preston we get this feeling of being a bit outside of things, which i think works well for us creatively as it allows us some space. There’s something about the North West of England that’s uniquely bleak, and that impression seems to have been captured in the sounds of bands who’ve influenced us, like Joy Division, The Smiths, Doves etc…

Do you have a personal, stand-out track from the album? (be it because it was a challenge to complete, or has your favourite lyrics or the most dynamic sound etc)

Joey: My personal favourite is Portra, as I feel like it’s the closest to getting across what we wanted to get across initially, both sonically and lyrically.

Katie: Nightfall is my favourite, as it’s a more recent song that’s heading in a new direction for us…

Your songs are highly evocative, is there an ideal listening experience or sensory place you want your music to transport listeners to?

The visual landscape of White Flowers is incredibly striking and complementary to the music. How did you develop this unified aesthetic?

One of the benefits of the record taking so long to come together was that it allowed us to experiment with the aesthetic and let it take its own course. We’ve always been drawn to monochrome imagery, and for us the black and white just seemed to complement the music well. The artwork, visuals and music have always been interlinked for us, it’s just an extra way of expressing things. Having just started playing live again, we’ve created a new set of visuals which are projected onto us when we play. Hopefully it’s making the shows a more immersive experience.

What’s next for White Flowers?

We’ve got a load of live dates lined up throughout 2021, which will hopefully spill over into next year. We’re really looking forward to getting out and playing the record live, and also working on new material.

‘Day by Day’, White Flowers’ debut album is out on the 11th of June and can be found HERE.