Go 2 was the second studio album by the English band XTC released on 6 October 1978. The album’s title was chosen in reference to the board game Go and continues the black-and-white colour scheme from first album, White Music. The “2” was added by keyboardist Barry Andrews.

The album’s cover was designed and implemented by Hipgnosis, an art design team based in London that specialised in creating cover art for the albums of rock musicians and bands. They worked for other artists including AC/DC, Pink Floyd, Paul McCartney and The Police.

Hipgnosis covers were noted for their unusual humour, for example Pink Floyd compilation cover, A Nice Pair, included a selection of graphic puns. The art design team also created a visual pun for Led Zeppelin on album, Houses of the Holy, much to Jimmy Page’s annoyance This almost lost Led Zeppelin as a business partner. 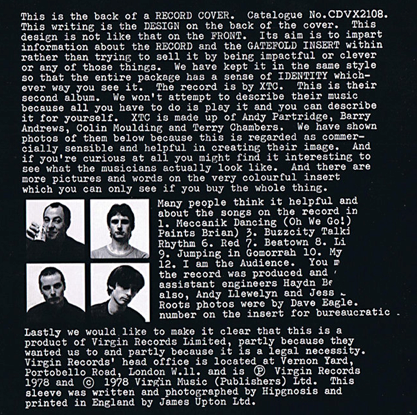 Another characteristic of Hipgnosis was that many of their work told “stories” that were related to the album’s lyrical content. They frequently included double meanings of words, or puns in the album title.

XTC GO 2 cover continued that theme and consists of an essay about how album covers are used to attract buyers of the album. Although the artwork is in the form of an essay, it even now, has a contemporary feel, and the text does not take this away from it. The visual aspect of the cover, with its minimalistic use of black and white would have us believe that this is a creation of the current age.. The cover is almost a piece of art itself, without considering the music. Everything fits. The text is condensed into a tight and square layout.

1978 was a time when the typical look of album covers included band images of members standing in the studio, on the street in a park or in front of a landmark building. This departure from the norm also makes XTC’s album cover an interesting concept as it was going against the ‘status quo’ and what other artists were doing, with nothing else to compare it with at the time.

This is the text that appears on the album cover:

This is a RECORD COVER. This writing is the DESIGN upon the record cover. The DESIGN is to help SELL the record. We hope to draw your attention to it and encourage you to pick it up.
When you have done that maybe you’ll be persuaded to listen to the music – in this case XTC’s Go 2 album. Then we want you to BUY it. The idea being that the more of you that buy this record the more money Virgin Records, the manager Ian Reid and XTC themselves will make. To the aforementioned this is known as PLEASURE. A good cover DESIGN is one that attracts more buyers and gives more pleasure. This writing is trying to pull you in much like an eye-catching picture. It is designed to get you to READ IT. This is called luring the VICTIM, and you are the VICTIM. But if you have a free mind you should STOP READING NOW! because all we are attempting to do is to get you to read. Yet this is a DOUBLE BIND because if you indeed stop you’ll be doing what we tell you, and if you read on you’ll be doing what we’ve wanted all along. And the more you read on the more you’re falling for this simple device of telling you exactly how a good commercial design works. They’re TRICKS and this is the worst TRICK of all since it’s describing the TRICK whilst trying to TRICK you, and if you’ve read this far then you’re TRICKED but you wouldn’t have known this unless you’d read this far. At least we’re telling you directly instead of seducing you with a beautiful or haunting visual that may never tell you. We’re letting you know that you ought to buy this record because in essence it’s a PRODUCT and PRODUCTS are to be consumed and you are a consumer and this is a good PRODUCT. We could have written the band’s name in special lettering so that it stood out and you’d see it before you’d read any of this writing and possibly have bought it anyway. What we are really suggesting is that you are FOOLISH to buy or not buy an album merely as a consequence of the design on its cover. This is a con because if you agree then you’ll probably like this writing – which is the cover design – and hence the album inside. But we’ve just warned you against that. The con is a con. A good cover design could be considered as one that gets you to buy the record, but that never actually happens to YOU because YOU know it’s just a design for the cover. And this is the RECORD COVER. 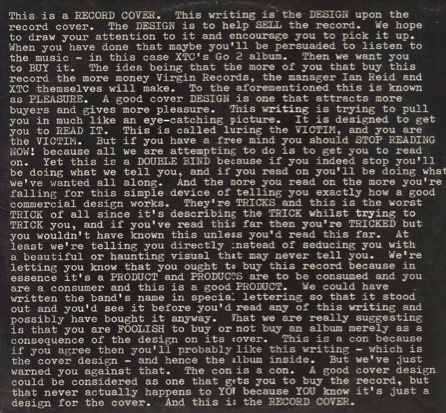 The text starts off being straightforward to follow, and everything mentioned is fact:

“ This is a RECORD COVER. This writing is the DESIGN upon the record cover. The DESIGN is to help SELL the record. We hope to draw your attention to it and encourage you to pick it up. When you have done that maybe you’ll be persuaded to listen to the music – in this case XTC’s Go 2 album. Then we want you to BUY it.”

As it progresses, it appears that they are trying to trick us, and turns into something of a mind bender. Trying to figure out the Universe seems an easier option to work out what is really going on here.

Album covers usually include pictures to draw people to potentially purchase. This instead includes text which explains how they are not doing this and how you should not buy the album. We rarely do what we are told, so out of sheer curiosity, we will be more likely to end up purchasing it. It pretty much turns into a puzzling and satirical essay that pokes fun at the industry:

“The more you read on the more you’re falling for this simple device of telling you exactly how a good commercial design works. They’re TRICKS and this is the worst TRICK of all since it’s describing the TRICK whilst trying to TRICK you, and if you’ve read this far then you’re TRICKED.”

The album cover was no doubt ahead of its time and would slot right in today with a reverberating message that questions consumerism. Although attached to one of the great Post Punk acts the album cover design has never really attracted the credit it deserves. Spend some time to read it- makes you think.

What we are really suggesting is that you are FOOLISH to buy or not buy an album merely as a consequence of the design on its cover.” 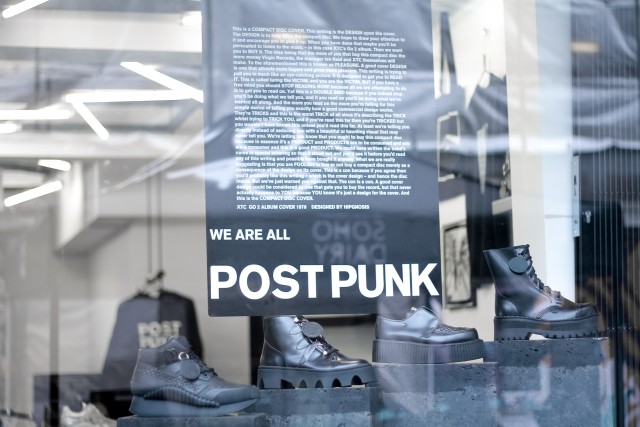