We are all a product of our environment and it shows with some of us more than others. For this Sister act band the environment has been worldly experience of travelling around the world initially as a result of their parents job postings but more latterly as a continuation of their global identity. Harmonious tunes reflect their observations along the way and present social and political thoughts in an intelligent thought provoking way.

We were lucky enough that they could call by our store in Soho, tell us about what’s going on and give us an impromptu store mini gig.

Give us your names:

We know that you are well travelled from Papua New Guinea to Canning Town via HK, Philippines, Sri Lanka Andes Switzerland so we will not ask you where you are from. London is home for now but do you get back to those places?

We haven’t been back to PNG, Hong Kong or Philippines for a while now but used to visit more when we were younger and still living in Asia. Sri Lanka, we’ve been going back almost every year for the last 5 years for Christmas and New Years as our parents were still living there. Our Dad is a civil engineer so that’s why we moved around a lot. We pop over to Zurich quite regularly as our older sister lives there and it’s relatively close. Definitely don’t get to visit these places as much as we’d like to but there are always new places to see and explore. Would definitely recommend travelling to all of the above as they are all amazing places. We just got back from Antigua for one of our best friend’s wedding. It was beautiful, a welcome break from city life.

What type of music did you listen too when you were growing up?

Coco: I guess the earliest music we listened to was from our mom and dad’s music collection so stuff like Tracy Chapman, Jimi Hendrix, The Beatles, Journey. Loved Shania Twain, Destiny’s Child, and all that cheesy 90s pop as well. Got into pop rock in my early teens like Green Day, Good Charlotte, MCR and then progressed towards indie rock, a bit of rap and hip hop and back to the classics like Dylan, Fleetwood Mac and Motown as I got older.

Holly: I jumped from Limp Biscuit and Avril Lavigne to Nirvana and Pearl Jam, from Belly to Janis Joplin and Jimi Hendrix , the Kinks and the Zombies , Fleetwood Mac , the Beatles ,to Nina Simone and Bessie Smith , Memphis Minnie to Bob Marley, Whitney Houston …all the while listening to Yeah Yeah Yeahs and Rilo Kiley , Whispertown 2000 , Empire of the sun, Tilly and the Wall, (the list is endless) Ooh I also loved Spice Girls and Backstreet Boys when I was younger (who am I kidding I still do!) 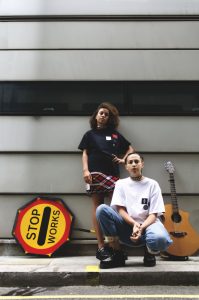 What or who made you want to start creating music?

I can remember wanting to play guitar from an early age. Our older sister Krystle played acoustic for a while but moved on to piano so I would mess about on that one and then when I was 11 my parents got me an electric guitar and I started lessons. Holly started writing songs young and asked if I could help out on the guitar parts so just went from there. So I guess it was their influence that pushed me into creating music.

Who musically is your biggest influence either before or now?

What is your main source of inspiration to write your music?

Experiences and the places we’ve been I reckon and what we’ve been reading about or talking to people about. 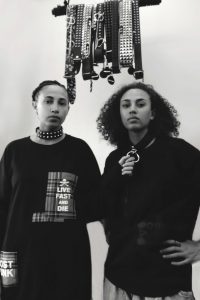 Which is your favourite of your songs to play live, and why?

It always changes but right now it’s one of our newer songs, the air is sweet as we’ve been working on a new arrangement with our guitarist Joe and so am excited to try it out live today at a festival we’re playing called Altitude.

It’s a digital age and that has done great things for music. But we still see a big place for Vinyl- your thoughts on that and any plans to launch something on Vinyl?

I think there’s still a big demand for vinyl, it’s a bit more niche as not everyone has a record player and it’s more pricey but think it’s worth it. The great thing about vinyl is it forces you to listen to an album as a whole without skipping so you begin to appreciate songs that maybe you weren’t so keen on initially, plus they look great too! We launched our debut album Sweetooth last year which is available on vinyl, cd and download. We’re working on album 2 now and plan to also release it on vinyl, and are hoping to include a digital download code on the vinyl so it’s convenient for everyone.

What was the first music you bought (vinyl or otherwise)?

The smurfs on tape

What was the last album that you bought (vinyl or otherwise)?

What is your favourite venue that you have played?

We supported Mika last year and one leg of the tour was around Italy. All of the venues we played there were stunning. My favourite was one in Molfetta as it overlooked the ocean and just as we were playing could see the sun set, it was amazing!

Over the years, the U.K has lost hundreds of its grassroots music venues. Have you lost a venue that was special to you?

12 Bar was a great small venue that we enjoyed playing and going to, was particularly sad to see it close.

You can pick any band or artist to support you on tour- who is it going to be?

Jenny Lewis although don’t think she should be supporting us.

You can support any band or artist on tour -who is that?

Any new band or artist you want to tell us about?

2 artists you should check out are L.A Salami & Alice Jemimah, both are awesome!

Any new venues you are at this year that you just can’t wait for?

Playing Bestival again this year which is always something to look forward to.

What are your plans as a band/artist?

Currently we’re working on new songs, arrangements and experimenting a bit with sound for second album. In terms of the future just playing as much as we can really.

UNDERGROUND inspires and is inspired by British Subculture, both past and present. Which Subculture or British artist has had the most influence on you?