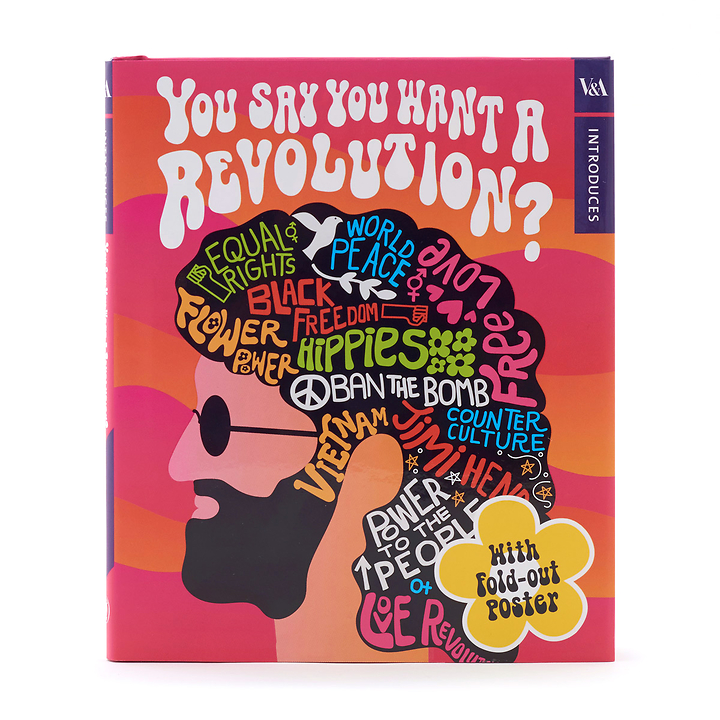 From the 10th September 2016 – 26th of February 2017 the V&A will be housing an exhibition of some of the most impactful music, performances, film, design, fashion and political activism of the 20th century, all created between 1966 – 70.

‘You Say You Want a Revolution?’ will share artwork from the Revolutionary 5 years at the end of the 60’s that brought along upheaval, ‘an explosive sense of freedom’ and the changing of laws that inevitably resulted in the shift in the mindset of the Urban world today.

“From global civil rights, multiculturalism, environmentalism, consumerism, computing, communality to neoliberalist politics, the world we live in has been vitally influenced by Years 1966-70″

What was happening during the short space in time that is explored in this exhibition has certainly been pivotal in the shaping of the lives we lead today. The whole of the Western World was effected by the wide reaching social, political and intellectual changes that the late 60’s inspired. The then youth questioned long established power structures across all areas, something never dared previously. Liberalism, optimism, idealism and motivation to join forces and make things happen followed the austerity of post war Britain, POWER TO THE PEOPLE.

The exhibition will zoom in on environments that helped breed the revolution; Carnaby Street in London, clubs, the Paris protests of 1968, Montreal and Osaka World Fairs, Woodstock 1969 and communities on the West Coast of the USA. The sound track to the event comes from the legendary John Peel and consisting of the greatest music and performances from the decade and interviews from influential figures of the time including Yoko Ono and Twiggy will accompany images and visuals that assist in telling the story.

“More than 350 objects encompassing photography, posters, literature, music, design, film, fashion, artefacts, and performance that defined the counterculture will illustrate the way that a whole generation shook off the confines of the past and their parents, radically revolutionising the way they lived their lives.”

The exhibition will be open from Saturday the 10th of September, if interested £16 tickets can be purchased online or at the V&A.

What’s Up Next- The Revolution keep on going?

The V&A launched the ‘So You Want a Revolution?’ with a party and an exclusive guest list and top of the bill -Grime legend and free speaker, Skepta, gracing the stage and representing modern day musicians that rebel against social and political injustice.

It is inspiring to think such a short moment in time in the late 1960’s could advance society so much. The years we have explored in this exhibition however are certainly not the only ones relevant in changing the world. Through art and social media, the new gen youth are spreading messages faster and further than ever before. Music and fashion are driving forces of affiliation today and play a huge role in the presentation of identity.

So here’s the thing- it’s about looking forward and not looking back. Those few years back in the sixties accelerated the social change that had begun a decade earlier and laid the track for today’s generation.

People, and young people in particular today are standing up and saying what they want to in the truest way, whether it be through what they create, what they write, the music they listen too or how they present themselves. So what’s up for that new generation?

We spoke to some of London’s young rebels about what inspires them, what they are listening, what role fashion plays in their identities and the Record that reflects their current thinking. 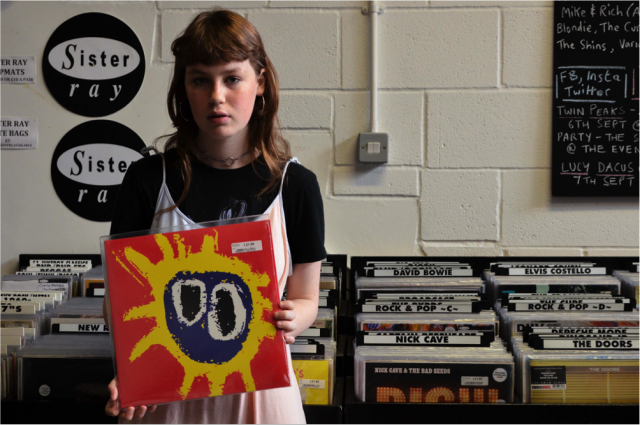 My name is Molly Hunloke, I’m 17 and I live in south London. I used to work in a comic shop but quit recently because of school and I part time model. I’ve been learning Japanese and making small clips of my favourite animes.

My taste in music influences my fashion greatly. For example, if I’ve been listening to Babymetal, I’ll dress more gothic and dark. Lately I’ve been thinking more about the environment and how damaged it’s becoming and will soon be irreversibly harmed.

This is my last year of school so I’ll be taking a levels and then hopefully be staying in Tokyo or Kyoto over summer holidays before I start university! 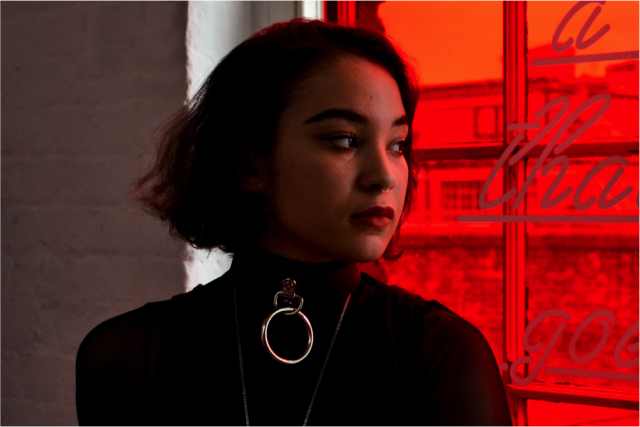 My name is Tyler, I’m 22 and I’m from Hackney, East London. I currently work as a waitress *although subject to change, this week* and I occasionally call myself a writer. I really enjoy going to gigs, wandering around museums and drinking copious amounts of whisky.

I don’t know if I can give credit to a specific thing that influences my style. I like black. A lot. I like long draping clothes, as well as leather, mesh and lace. I’m quite inspired by Gothic architecture, the Victorian era and The Occult.

Music is important in the way I dress. I listen to a lot of Rock and Metal, so I think that’s where the love of black clothing comes from. If I feel like dressing casual, then a band t-shirt is my go to item. I also like alternative, atmospheric music, so that probably influences my love for long draped shirts and kimonos. I’m really into the new wave of female rock bands, and the empowerment their position gives women. This makes me confident in wearing sheer t-shirts and dresses, to reclaim my femininity and not be sexualised by my outfit choices.

In the next year, I want to be making my way into becoming a whisky ambassador – giving talks to people and informing them about the Holy water. As well as this, I think I want to get back into writing prose. 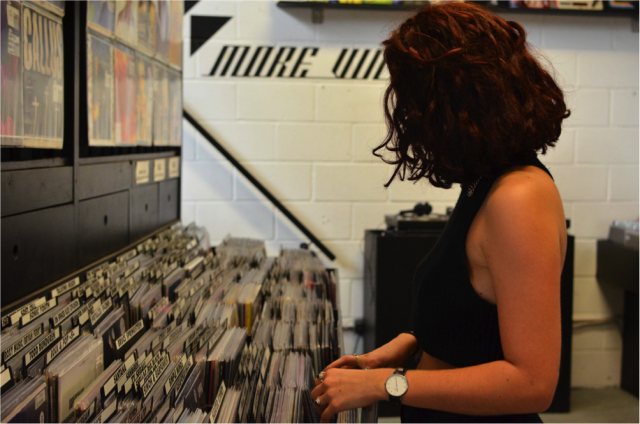 I’m Manon, 22, born in London to French and Argentine parents. I’ve recently graduated from UAL, having studied Fine Art Painting at both Central St Martins and Wimbledon College of Art. I specialise in portraits- right now I’m juggling a job in retail with establishing myself as a painter, so most of my spare time is spent working on personal projects or commissions.

I think anything and everything influences my style. As an artist I notice that I am constantly inspired by my surroundings, whether it is conscious or subconscious. A large part of my wardrobe is made up of vintage/charity shop finds and hand-me downs from my mum, she has always been a huge influence in everything that I do.

My taste in music is very varied, but my favourite musicians are mostly from the 60s – 80s, so I guess my love of old music ties in with my love of old clothes. I’m all about feminism and the empowerment of women; in the past year my artistic practice has developed around these themes, and I have been involved with several projects also discussing these topics. In regards to feminism I’m influenced by all-sorts of inspirational women, and musicians definitely play a big part, Patti Smith, PJ Harvey, Kate Tempest and Pussy Riot, to name a few. As a vegan, animal rights are hugely important to me and I can definitely credit some of that to Morrissey, one of my favourite singers (if you haven’t heard Meat is Murder by The Smiths then you should give it a listen). I also care a lot about the planet and the environment – I’m 100% Green Party, though I’m a big fan of Jeremy Corbyn.

My plan for next year is to travel through Central and South America. While I’m travelling I will be doing a research project on the people of Latin America, specifically the women. I want document the various different cultures in a series of portraits, through a combination of photographs and paintings. This project is particularly important to me, as the daughter of a South American woman, I feel drawn to that continent, to my roots, and to carry on exploring the identity of women through my art. Plans are still very much in the air, so no dates have been decided yet, but hopefully I will come back with exciting results. I’m part of an all-female art collective ‘Mammary Gang’, we had our first exhibition in May this year and there will be new things coming from us soon.

To find out more about ‘You Say you want a Revolution? Records and Rebels 1966 – 70’ and what’s on at the V&A visit:
https://www.vam.ac.uk/exhibitions/you-say-you-want-a-revolution-records-and-rebels-1966-70