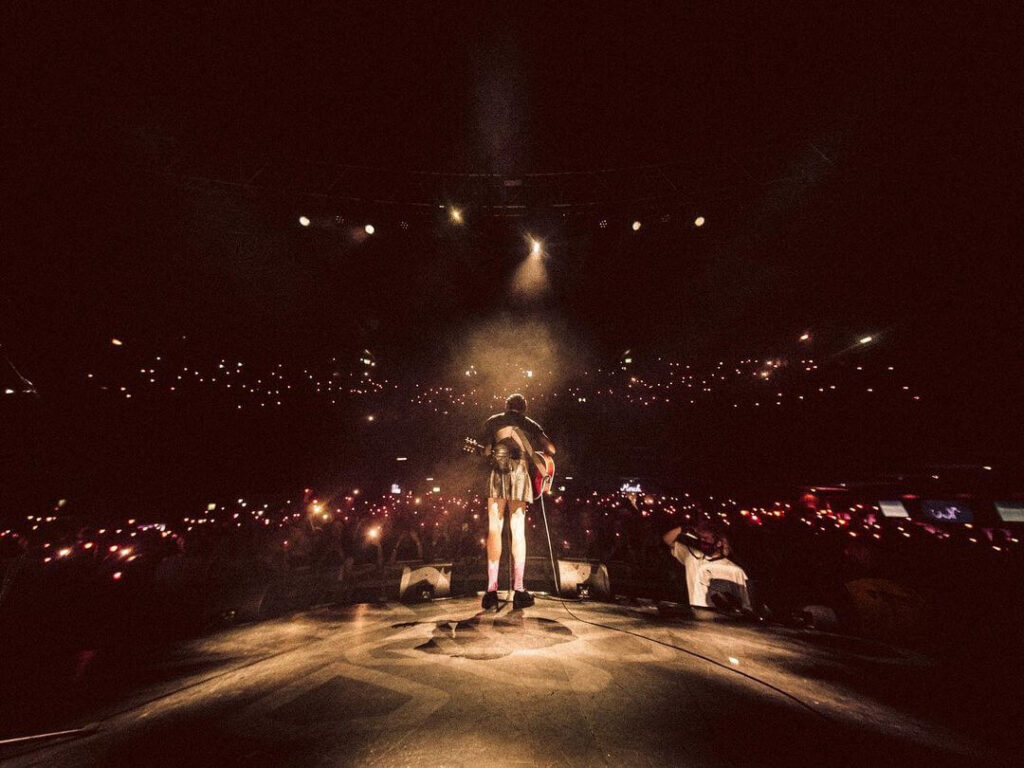 Less than a week ago, Yungblud – the alt-pop/rock superstar leapt back onto the stage across the nation for his ‘OCCUPY THE UK TOUR’. Featuring two nights in Nottingham and five nights almost consecutively at The O2 Forum Kentish Town, the entire tour was sold out within minutes.

Kentish Town was an obvious choice for the alt-rocker. The heritage of the venue includes previous performances from the finest of UK rock stardom with the likes of David Bowie, Arctic Monkeys, Oasis, Franz Ferdinand, and Radiohead all having taken to the stage there.

With fans that had been waiting outside the venue in sleeping bags and tents for days in anticipation, it was clear that after two years waiting, there was nothing that could hold back the delirium to watch Yungblud storm the stage once more.

After the enigmatic Wargasm had warmed up the crowd with their opening act, the audience’s anticipation could have been cut by a knife. For what felt like an eternity, the crowd were chanting the word ‘Yungblud’ and stomping the floor in desperation for the Doncaster hailing star to arrive on stage.

The set started with a projection of Yungblud’s lips in a Rocky Horror Show-esque manner, speaking to the crowd and addressing them with questions that were replied to via screams. Only moments later did Yungblud appear behind the curtain, casting a shadow over it, before the curtain dropped and screams erupted as the crowd was face to face with him.

The Set was instantly kicked off with ‘Strawberry Lipstick’ – the first single to be released from the chart-topping ‘Weird!’, followed by ‘Parents’, but it wasn’t until the high-octane ‘Superdeadfriends’ where everything kicked off, with the crowd splitting down the middle for a mosh pit and Yungblud chanting the words ‘wider’ repeatedly in an attempt to create a raucous chaos.

The antics between each song could only be described as a loveable pantomime, with Dom finding ways to play games with the crowd. Leaving the audience either cheering, laughing, or crying, Yungblud basked in the connection that he made with the crowd, something that is predominant within his close relationship to his fanbase.

Teasing a new release Dom played ‘Fleabag’, his yet-to-be released song at the time, this being the first time that he had played it live on tour. Despite being unreleased, the majority of the audience knew it word for word, with Dom teaching the rest of the crowd the chorus.

After slowing the show down before the penultimate songs, it was here that Yungblud reminded the audience of the community of love and acceptance that they had created. Even bursting into tears during ‘Casual Sabotage’, Dom told the heart-warming anecdote of how much the fans had saved his life, something that through his music he attempts to do for his listeners.

After performing ‘I think I’m Okay’, the co-written song with Machine Gun Kelly, which saw the crowd burst right back into the insane energy after slowing down, Yungblud left the stage. This only left the crowd in further anticipation once more for the encore of the show, causing the yet loudest chant of them all with fans demanding one more song.

Not only was one more song played, but when Dom pranced back onto stage, he performed a trio of songs, with the finale being the politically-charged ‘Machine Gun’. Known amongst fans as the song that always causes the most chaos – the pits were as wide as the whole standing area, and the crowd were chanting after Dom ‘Fuck Covid’.

Once the show was over and the crowd had left to go outside, Yungblud climbed on top of a van that he spray painted himself, and chanted ‘fleabag’ one more time – something that truly embodies the star that he is.

Whether it is someone’s fiftieth or first time seeing Yungblud, he is always one to deliver an emotional roller-coaster of a performance, bound to leave you in happy tears. By selling out this tour within minutes, it is safe to say that the phenomenon that is Yungblud, is not slowing down, with a bright future ahead of him.

‘Fleabag’ was released on the 19th August, with its first play on BBC Radio 1 during Dom’s takeover of the Future Sounds show.